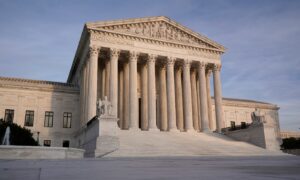 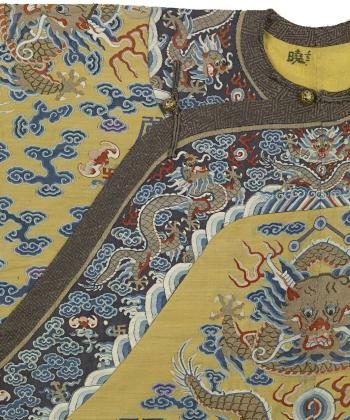 Items of Qing court dress are covered from top to toe in the most detailed and refined silk embroidery.
US

By Kati Turcu
biggersmaller
Print
Try as hard as you may to find another culture that excels in making all things minuscule to the point that is demonstrated in Chinese art and craft it is unequivocally impossible. Out of all China’s many dynasties, the last dynasty – the Qing Dynasty (1644 -1911), is the most intricate and ornate. Items of Qing court dress are covered from top to toe in the most detailed and refined silk embroidery that is designed to dazzle. The visual spectacle however, reveals more than just royal splendour, it reveals the history of China and its people.

Currently on display at the National Gallery of Victoria (NGV) an exhibition of over 40 works tells an intricate tale about how the Qing Dynasty came about and poses the question: just who ruled who in the end? The exhibition, Dressed to Rule: Imperial Robes of China, features robes worn by the Qing Emperor of China and members of his imperial court at the Forbidden City in Peking (present day Beijing).

Try to picture life before 1644; going by historical accounts and artifacts, Chinese people living under the previous, Ming Dynasty, were comprised of farmers, public servants, army and nobility. They engaged in leisurely endeavours such as music, dance, writing poetry, and drinking tea, and were generally dressed to impress in a rather impractical way.

Although there was a Ming army, it could not withstand the nomadic Manchu, who swept through and conquered the Middle Kingdom Zhong Guo (China).

The Manchu, an ethnic minority, thus came to rule over the estimated 150 million Chinese as the Qing Dynasty. They were generally a dynamic lot who excelled in martial arts and horsemanship, and accordingly wore tighter fitting clothes, riding boots and pony tails. They imposed these on the Chinese people but then adopted the Chinese ways of government complete with the moral values and political ideology derived from Confucianism.

The Manchu Emperor also adopted the attire of a Chinese Emperor wearing imperial robes complete with all the traditional Chinese emblems of imperial authority as well as auspicious symbols.

“Qing robes combined Chinese elegance with the robust, barbaric splendour of the Manchu. The robes bear witness to a confrontation of two different cultures, the nomadic Manchu and the sedentary Chinese, the conqueror and the conquered,” said Dr Mae Anna Pang, Senior Curator Asian Art at the NGV.

A highlight of the exhibition is a bright semi-formal court robe known as jifu (auspicious robe) once worn by a Manchu emperor at banquets. “The sumptuous imperial robes are woven in exquisite silk and embellished with gold and jewel-like rainbow colours. A cosmic order is created by the celestial dragons and auspicious symbols of nature,” said Dr Pang.

The embroidery also depicts the five elements that make up all matter in the universe and with a symbolic correlation related to the wearer. For example fire represents intellectual brilliance, water is depicted as rainbow coloured waves that contain in them an abundance of many other symbols suggesting that it sustains all life.

There are also many kinds of flowers and plants whose meaning is far from obvious. For example the chrysanthemum is the flower for autumn but it also represents a recluse. A more obscure one is the waterweed indicating purity.

The visual overload would have been even more awe inspiring in the context of court life two to three hundred years ago. Beholding the splendour, however, would have been just as informative about the wearer as it is today.

For history buffs there are plenty symbols to decipher. Among them is the Swastikam or Swastika, originally known as the symbol for Buddha which was adopted in China from India as Buddhism spread. The swastika came to represent longevity as well as  the Chinese character for the numeral ten thousand or wanzi .

When it comes to footwear, the Manchu women had to wear boots with formal or semi-formal dress but the rules for informal attire were different. Upper class ladies could, and indeed would, wear the most outrageously tall platform silk slippers also covered in embroidery.

An equally innovative approach to miniature detail is evident in the only visually demure piece in the exhibition -an unusual bamboo underjacket which on closer inspection proves to be incredibly intricate in its manufacture. It is made up of tiny hollowed out bamboo branches, turned into tubular beads and threaded together like a net. What was it used for?

To improve air circulation under the other garments in hot weather, of course.

Dressed to Rule: Imperial Robes of China is showing at the NGV until 6 September 2009 and is free of charge. Visit ngv.vic.gov.au for further information.