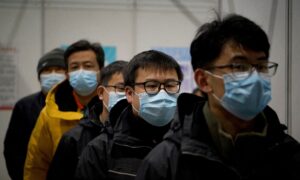 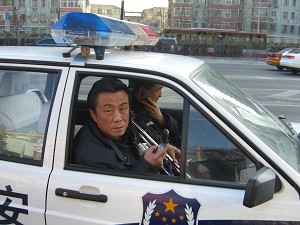 Mr. Qi Zhiyong in a police vehicle, Mr. Qi was taken by the National Security officers for questioning at 4.00pm on February 9. (The Epoch Times)
China

The mainland China's Relay Hunger Strike in support of human rights and to protest against violence started at 6:00 a.m. on February 4, 2006. Many non-governmental organizations and individuals have expressed their support and participated in the relay hunger strike started by attorney Gao Zhisheng and other human rights advocates. Mr. Qi Zhiyong has been under house arrest since February 9 for participating in the hunger strike.

The Epoch Times interviewed Mr. Qi Zhiyong and Mr. Hu Jia while they were under house arrest.

Mr. Qi Zhiyong said the Relay Hunger Strike is just like a rising storm taking over the whole of China; what the Chinese communist regime fears the most is people's power

It was reported that, at 4:00 pm on February 8, when Attorney Guo Feixiong arrived at the Xinhua gate for a peaceful petition, the police took him away immediately. The Beijing authority refused to release any information about him. At 4:30 pm, Mr. Qi Zhiyong arrived at the scene and witnessed police vehicles driving back and forth carting people and the democratic movement activists appealing whom they considered dangerous. Mr. Qi's ID card was impounded on the spot.

Mr. Qi said that the police station on Fuyou Street is located just west of the Xinhua gate; he believed that attorney Guo Feixiong was also taken by the policemen from that police station, but he thinks Guo will not be detained in that police station longer than 12 hours before being transferred to another location. Guo's cell phone had not been working since he was seized.

On February 9, Mr. Qi wanted to go to the hospital on his disabled motorcycle but was stopped by the police. There were four policemen guarding his house, two by the front door and another two at the back door, they were watching his every move. When he told them he wanted to go to the hospital for treatment and medicine, the policemen retorted, “You caused the turmoil, you deserve to die from the illness.” Mr. Qi said, “The authorities are afraid of the democratic movement activists becoming united and going on the streets or to the Xinhua gate to protest against Guo's arrest.”

Mr. Qi said, “This relay will continue until victory is achieved. As long as we persist, victory will be in sight. Everyone loves a good life and his body, by using this most primitive means of a hunger strike that has ill effects to one's body, it is really the last resort after all other means have been exhausted. We are a group of people without resources, helpless, without any power or social status, by using this kind of peaceful and rational method without violence or weapons we might jolt others' conscience, this is our last resort. What Guo and Gao have done to appeal to the tyranny regime, it is truly selfless, hopefully, it should hit a cord in the CCP's high-level officials. We like to think that the CCP high-level officials are also human beings with some human sense; if not, they would indeed be hoodlums dressed in civilized suits.”

Mr. Hu Jia: I was stopped from going outside as soon as I stepped out of the front gate

It was reported that, to join the Human Rights Relay Hunger Strike Support Group, Mr. Hu and Mr. Qi participated in the 24-hour hunger strike relay on February 6. On the morning of February 9, when Mr. Hu was planning to go to the Fuyou street police station to look for Guo who was then on hunger strike at Xinhua gate from February 8 before being taken by the police, Mr. Hu was stopped by the policemen stationed outside his house, and was not allowed to go out.

Mr. Hu told reporters, “When I stepped out of the steel front gate this morning, five policemen came to block my way. I explained my reasons for going out and told them I am a free citizen, they still said, 'You can not leave.' Then, they started hitting and dragging me in, as I tried to push my way through, they twisted my arms, and pulled my collar to stop me. This went on for 10 minutes, passers-by and the neighbors from upstairs were all looking on; this made the policemen uneasy. They then dragged me to their office on the side and told me they had strict orders to keep me under house arrest and I was not allowed to leave the place.”