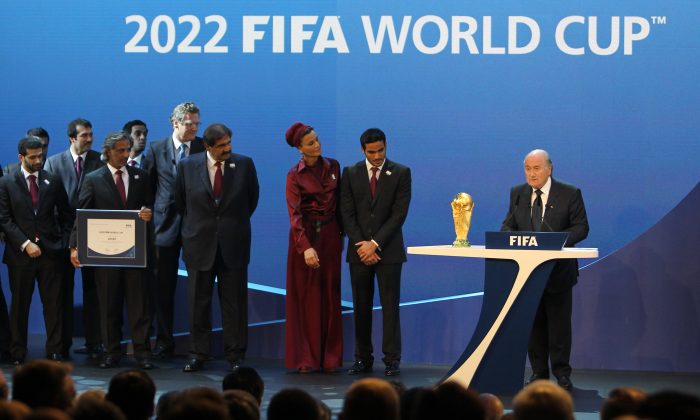 The Qatar 2022 World Cup bid team ran a secret operation to undermine its competitors, a British newspaper has reported. If such allegations are true, it would be a breach of FIFA’s bidding rules.

The UK’s Sunday Times says that leaked emails from a whistleblower show that Qatar’s bid team hired a U.S. PR firm and former CIA agents to smear its main rivals, the United States and Australia.

The “black operations” campaign sought to create “fake propaganda” by recruiting influential people to attack the bid in their own country, thereby creating the impression that there was no domestic support for a World Cup, the paper said.

One of the core criteria set down by FIFA, the world soccer’s governing body, was reportedly whether the domestic population strongly backed the hosting bid.

Under FIFA’s rules, bidders are prohibited from making “any written or oral statement of any kind, whether adverse or otherwise, about the bids or candidatures of any other member association.”

In 2010, Qatar won the right to host the 2022 World Cup, beating rivals the United States, Australia, South Korea and Japan.

The Qatar bid team has previously been accused of corruption, but was cleared after a two-year FIFA investigation in 2014.

One of the leaked emails, the Times claimed, was sent to Qatar’s deputy bid leader Ali al-Thawadi, and allegedly showed that the Gulf state was aware of a plot to spread “poison” against the competing bidders.

Middlemen acting for the bid allegedly paid a professor $9,000 to write a report about the economic burden a U.S. World Cup would bring, and distributed the story to international media.

Journalists, bloggers and high-profile figures were also recruited in each country to promote negative stories about their respective bids, according to the paper.

A group of American physical education teachers were allegedly recruited to ask their congressmen to introduce legislation to oppose a World Cup bid, on the grounds that the money would be better used on funding high school sports.

Qatar’s Supreme Committee for Delivery and Legacy said in a statement it “rejects each and every allegation put forward by the Sunday Times.”

“We have been thoroughly investigated and have been forthcoming with all information related to our bid, including the official investigation led by US attorney Michael Garcia,” it said. “We have strictly adhered to all FIFA’s rules and regulations for the 2018/2022 World Cup bidding process.”

In a statement sent to the BBC, FIFA said, “a thorough investigation was conducted by Michael Garcia and his conclusions are available in the report,” referring to its completed two-year investigation into the Qatar bid team.

According to The Times, the leaked documents were apparently not seen by the FIFA inquiry.

The paper said the documents were leaked to the paper by a whistleblower who worked with the Qatar bid on the World Cup campaign.