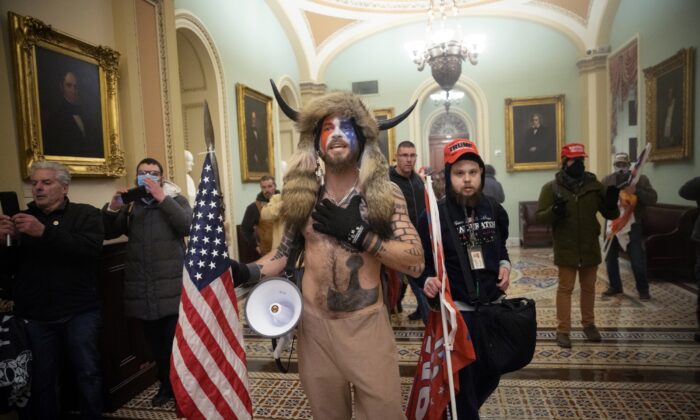 The accused U.S. Capitol rioter dubbed the “QAnon Shaman,” Jacob Chansley (center) and other protestors outside the Senate chamber of the U.S. Capitol Building in Washington on Jan. 6, 2021. (Win McNamee/Getty Images)
US News

Jacob Chansley, sometimes known as the “QAnon Shaman,” pleaded guilty to a felony charge during the Jan. 6 Capitol breach, according to court records on Friday.

He pleaded guilty in a virtual court hearing in Washington D.C. on a count of obstruction of an official proceeding, the court documents said. The guilty plea was made as part of a deal with prosecutors and was accepted by Judge Royce Lambeth, reports said.

Shortly after the Jan. 6 incident, Chansley, of Phoenix, was held without bond and has been in custody since then. While in detention, he was diagnosed with transient schizophrenia, bipolar disorder, depression, and anxiety after a medical examination.

Previously, Chansley’s lawyer said that his client no longer wants to be associated with the “Q” movement, asserting that he is a “long avowed and practicing Shaman.”

“The road leading up to the events of January 6 traversed years. The path charted by Mr. Chansley since January 6 has been a process, one which has involved pain, depression, solitary confinement, introspection, recognition of mental health vulnerabilities, and a coming to grips with the need for more self-work,” Watkins said in a statement. “It is imperative that patience and compassion be accorded those, who like Mr. Chansley, were non-violent, peaceful and possessed of genuine mental health issues.”

In connection to the incident, more than 600 people have been arrested. The vast majority have been released until trial, although a number of defendants have been held in what their lawyers have said are inhumane conditions.

About two months ago, lawyers for some of the defendants told The Epoch Times that several are in solitary confinement 23 hours per day, have been denied medical care, and have restricted access to their defense counsel.

“There are about 50 plus or minus that are being detained, that have been in prison for months and will likely remain in prison for many more months until their day in court,” attorney John Pierce said at the time.

And Watkins, during a Friday hearing, noted that Chansley’s mental health problems were exacerbated by the federal government keeping him behind bars before trial.

“He is a man with mental health vulnerability who has, for eight months, been in what any doctor [would say] is the worst thing you can possibly have done to you if you have a personality disorder, which is be placed in solitary confinement,” he said Friday.

Chansley’s sentencing date was set for Nov. 17. Watkins asked the judge to allow him to be released from prison pending the sentencing hearing, and the judge said he would consider it.