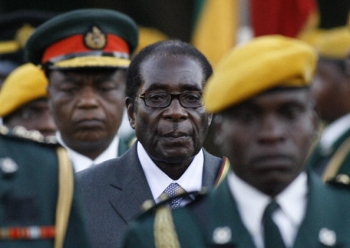 Zimbabwean President Robert Mugabe walks with a guard to be sworn in for a sixth term in office in Harare, on June 29, 2008 after being declared the winner of a one-man election. (Alexander Joe/AFP/Getty Images)
Opinion

Many world leaders and analysts agree that current Zimbabwean President Robert Mugabe illegitimately claimed victory in a run-off presidential election last Friday. Opposition leader Morgan Tsvangirai dropped out of the election before it occurred, saying that militant Mugabe supporters had killed 86 of his supporters and intimidated many others.

Tsvangirai actually beat Mugabe in the first round of the election, and claimed that Mugabe had altered the results to force a run-off.

On Wednesday, Mugabe was chastised by African leaders, who called for a unity government in Zimbabwe. It was an unprecedented action, but one that didn't carry with it any penalties.

To get his thoughts on the situation in Zimbabwe, The Epoch Times talked to Professor William Tita of North Eastern University in Boston, M.A. Professor Tita is from Cameroon, Africa and teaches Ethics and Business. He has worked as a Program Manager for the United Nations Development Program and visited Zimbabwe multiple times.

ET: Can you explain how Robert Mugabe first became the leader of Zimbabwe, or Rhodesia, as it was previously known as?

WT: Rhodesia got it's independence from the British and the country was actually hi-jacked by a small white minority. Mugabe led the forces along with some of his other cohorts and they were able to get the leader of that small minority out of power and at that time they changed the name from Rhodesia to Zimbabwe.

ET: What do you think about Mugabe?

WT: Well, there is no question in my mind that there is something drastically wrong with what is going on in Zimbabwe right now. And there is no way one can actually think about Mugabe's role in it that kindly.

There is something drastically wrong. Somebody once said power corrupts and absolute power corrupts absolutely. I think he has been corrupted by his own imagination of the power that he has as the savior and the liberator of Zimbabwe. I think that he has forgotten that when you liberate folks they become liberated and I think he thinks he is still liberating people who have already been liberated. So it's a very confused state of affairs.

ET: Mugabe's government and the Communist regime that rules China are both severe violators of human rights—do they have any other relationship besides that?

WT: Well it's quite obvious that China has a mission in Africa and the mission is very clear. It needs resources that Africa has to offer and in return it wants to reciprocate. At first it was providing the kind of capital infrastructure that Africa badly needed in return for access to the resources.

I just think China is becoming opportunistic and that it's taking advantage of a very bad situation in order to have access to the resources. Really it's not that they care anything about the wishes or issues like good government or democracy or the will of the people. They're just turning a real blind eye to that.

So right now the way it's playing out is China gets access to resources by providing the kind of support and indirect nourishing to African governments, [creating what] I would call is a puppet regime. But you know these kind of dictators are becoming a disaster for their own people.

I think that that's the way China is now perceived. And I think that's a very difficult situation for a super power like China to be putting itself in.

ET: What do you think the world should do to help the people of Zimbabwe?

WT: The whole governmental system in Zimbabwe right now just does not have legitimacy that one can accept. To allow them to belong to any body, whether it's the African Union or United Nations, I think it's just like declaring their legitimacy. I think that's the first thing.

The second thing is to take some very drastic measures to put up an alert that if things don't change or people continue to be persecuted or it begins to look like there's some genocide in the making that the world would intervene. It's too bad the United Nations doesn't have an idea of its own. The [United Nations'] Security Council could be called in to intervene to protect the interests of innocent citizens of the country. I think that's where we are headed to at this stage of the game.

You saw what happened at the Security Council the other day. There was discussion on what should be done [in Zimbabwe]. But a strong world power like China does have veto power in the Security Council. So nothing is going to happen if China decides to use the veto to stop any kind of action. The more [China] plays that role, it becomes quite obvious to the world and the more [China] will expose its hand. I don't think they really want to play so overtly.

ET: Do you think South Africa could have done more to pressure Zimbabwe to have a fair election?

WT: I think so. I don't think it would be unheard of if South Africa, with all of its moral power, were to persuade and do whatever it takes to get Mugabe to accept that things could be done the right way and to abide by the out come.

I think that South Africa could play more of a proactive role and it would get the support and admiration of the world. I am just a little, I wouldn't say disappointed, but in a quandary why South Africa hasn't been more proactive in trying to calm the situation and push Zimbabwe to do the right thing the right way.

ET: At any point, did you ever think there would be a chance of fair elections in Zimbabwe?

WT: Not fair, fair as you would expect it. But there were elections that surprised Mugabe. He couldn't stop the results at the parliamentary level. The parliament is controlled by the opposition.

ET: Do you think there is the potential for a good outcome to this scenario in Zimbabwe or a possibility for a good future for the people there?

WT: Zimbabwe is a very rich country in terms of their natural resources. I think they have a well developed infrastructure. Just like what South Africa inherited. They are a very well educated work force, no question in my mind about it.

I think the situation in Zimbabwe is being exposed to the world right now, starting with the role of China, which I think right now is the main support system of Mugabe and his regime. Somebody should convince China that doing that will not get it to be respected as a world super power.