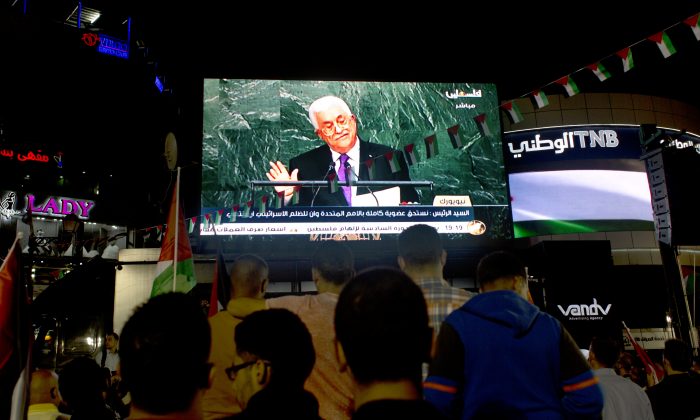 Palestinians watch a speech by Palestinian President Mahmoud Abbas at the U.N. General Assembly shown on TV in the West Bank city of Ramallah, Wednesday, Sept. 30, 2015. Abbas declared before world leaders Wednesday that he is no longer bound by agreements signed with Israel, and called on the United Nations to provide international protection for the Palestinian people. (AP Photo/Nasser Nasser)
Middle East

RAMLALLAH, West Bank— President Mahmoud Abbas seemingly made good on his threat to drop a “bombshell” in Wednesday’s speech to the U.N. General Assembly when he declared that the Palestinians cannot continue to be bound by 20-year-old security and economic agreements with Israel.

Yet his warning, while potentially a game-changer for Israeli-Palestinian relations, lacked a timetable and specifics, suggesting little will change on the ground for now and that Abbas hasn’t opted for full-on confrontation.

What agreements is Abbas talking about?

In the mid-1990s, Israel and the Palestine Liberation Organization signed interim agreements known as the Oslo Accords. They called for a transitional period of five years during which Palestinians would have limited autonomy in the Gaza Strip and parts of the West Bank, while Israel would retain overall security control.

By 1999, the two sides were to have negotiated a final peace deal culminating in the establishment of a Palestinian state. The Palestinians sought independence in the West Bank, Gaza and east Jerusalem, lands Israel captured in 1967.

Talks on a final deal broke down, and a major round of Israeli-Palestinian fighting erupted in 2000, ending only several years later. In 2007, Abbas’ main political rival, the Islamic militant Hamas, seized Gaza. Subsequent attempts at negotiating a final peace deal failed.

Have the Oslo accords survived?

Yes, to an extent, because they serve some interests of both sides.

The Abbas-led self-rule government, or Palestinian Authority, administers 38 percent of the West Bank. The rest of that territory and east Jerusalem are under full Israeli control, while Hamas runs Gaza. Israel continues to expand settlements in east Jerusalem and in the parts of the West Bank that remain under its sole control. Since the Oslo Accords were signed, the settler population more than doubled, from 231,000 to 570,000.

The Palestinian Authority, which was set up as a result of the Oslo Accords, is now the largest employer in the territories, with tens of thousands of families relying on government salaries. Abbas’ troops and the Israeli military coordinate efforts against a shared enemy — Hamas — and this cooperation has survived crises and uprisings.

The Israeli and Palestinian economies, the latter dwarfed by the former, are intertwined as part of the 20-year-old agreements, falling under the same customs envelope. The Palestinians have sought to renegotiate the economic arrangements, saying their territories have become a captive market for Israeli goods and a source of cheap labor.

What is Abbas’ complaint?

Abbas said Wednesday that continued Israeli settlement expansion and repeated military incursions into areas under Palestinian control violate standing commitments, including a pledge not to take steps that would prejudge the outcome of a final peace deal. He also cited Israel’s refusal to review the economic agreements that he said “control the ability of the Palestinian economy to develop and be independent.”

What was his warning to Israel?

Abbas said Wednesday that “we cannot continue to be bound by these agreements” as long as Israel is violating them and that “Israel must assume all of its responsibilities as an occupying power.”

How serious is Abbas’ threat?

Abbas did not provide a timeline, specifics or an action plan. He made no direct reference to resigning, dissolving the Palestinian Authority or even ending security coordination.

He referred to a set of decisions in March by a PLO body, the Palestinian Central Council, which called for ending security coordination. Abbas said these decisions are “specific and binding,” but did not elaborate.

By being vague, Abbas avoids immediate full-on confrontation with Israel and leaves himself room for diplomatic maneuvers, including the possibility of seeking a resumption of statehood talks with Israel under more favorable conditions.

Why did Abbas make the threat now?

Abbas appears to have lost the backing of the Palestinian public. A recent poll indicates that two-thirds want him to resign and that a majority no longer believe negotiations with Israel and a two-state solution are realistic.

At the same time, Abbas has failed to come up with an alternative to his long-standing strategy of negotiations. Analysts said they believe Abbas made a largely empty threat at the General Assembly on Wednesday to try to regain some of the lost support.

“This is a threat, not a plan,” said Palestinian analyst Hani al-Masri. “Abbas has no plan. Otherwise, he could have spelled it out in his speech.”