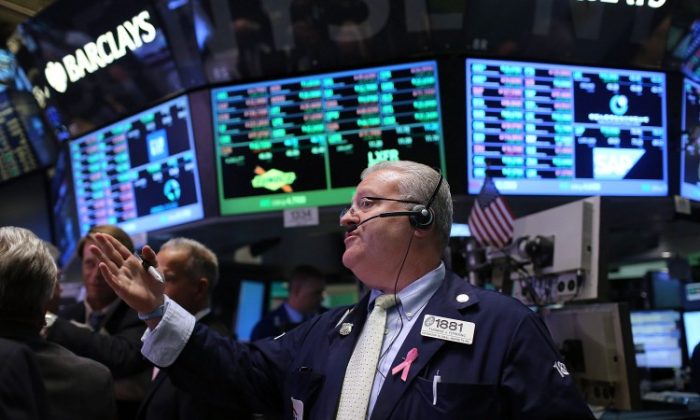 Traders work on the floor of the New York Stock Exchange during afternoon trading on Oct. 4. Third-quarter earnings season kicks off today with Alcoa, but S&P 500 companies are poised to register their first declines in earnings since 2009. (Spencer Platt/Getty Images)
Business & Economy

Third-quarter earnings season kicks off today with Alcoa, but S&P 500 companies are poised to register their first decline in earnings since 2009.

The decline will come off a streak of increasing earnings—setting all-time records in the process—and is likely to be modest, but for the stock market, turning points in corporate earnings are always important signals for the direction of the general market, which is trading at levels not seen since 2007.

“This will be the first time since the third quarter of 2009 that we are expected—based on estimates—to have a down year from an earnings standpoint,” Mark Litzerman, manager of proprietary equity strategy and research at Wells Fargo Private Bank, told The Epoch Times.

Analysts saw this slump in earnings coming and started revising their models lower as early as July, when they predicted third-quarter growth of 1.9 percent, according to calculations by the Financial Times. Now they are projecting a decline of 2.7 percent year over year (YoY). Overall, Mark Litzerman believes that analysts “sufficiently” downgraded their Q3 numbers.

As for the reasons for the decline, a weak global economy and compressing margins are the culprits, according to research by Morgan Stanley. “Roughly, 50% of the companies are expected to experience YoY contraction in net margins during the quarter, including heavyweights like Chevron, Microsoft, and Google. While revenue growth expectations have largely held up, earnings estimates for the quarter have seen sharp downward revisions in the last two months.”

This rough patch, however, should not worry investors too much says Litzerman, who has a year-end target on the S&P 500 of 1,500 points, giving it a valuation of around 14.5x 2012 earnings. The S&P closed yesterday at just under 1,466.

“The economy is still reasonable, earnings are still in an upward trend, we’ll still have positive earnings this year, even though they will be somewhat sluggish and we still think that earnings will be up for 2013. Clearly there is no catalyst in our view that’s going to suggest that earnings are going to take off rapidly and that we are going to have an expansion in valuation from here on out, we think things will continue to be reasonable.”

Alcoa, which is usually the first big company to report, is expected to report an EPS of $0.01 versus $0.05 last quarter. Three months ago, analysts were estimating a gain of $0.12 but continually lowered their numbers, as the European crisis intensified and the Chinese economy began to slow in earnest over the summer.

While the predictive record of some analysts is impressive, this quarter they merely have to follow company guidance, as there have been 91 negative preannouncements of earnings so far and many companies such as UPS and FedEx dramatically reduced their guidance when they reported results during the previous quarters.

Alcoa is the first big company to report Oct. 9, but 5 percent of S&P 500 companies have already reported earnings as of Oct.8, beating lowered estimates by around 1 percent on average, according to calculations by JP Morgan.

Banks Stocks to Save the Day

Litzerman also sees some reasons why bank stocks could outperform their peers this quarter in terms of earnings, as most of the “negative news is already out,” especially with respect to declining trading volumes and net interest margins.

Says Litzerman: “One of the things that could be a silver lining is in the mortgage side. The fact that we have seen mortgage applications tick up fairly significantly in the U.S. [and] the housing market is getting better. This is not to say that we are going to have earnings explode here because things are still sluggish, perhaps a better way to phrase it is that things are less bad from that standpoint.”

Litzerman thinks that small improvements in asset management, lending, credit quality and a lack of negative surprises, such as trading losses from big investment banks, helps to improve the outlook for financial company earnings.