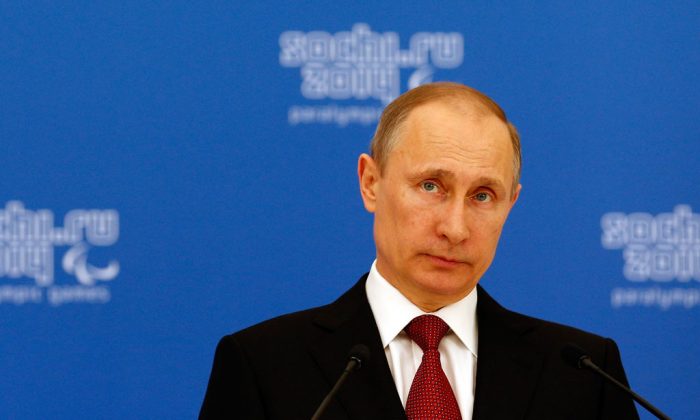 To understand why Russian President Vladimir Putin has been willing to escalate tensions in the Ukraine even after annexing the Crimean peninsula, it’s instructive to remember back to 2008 when he told George W. Bush that “Ukraine is not even a country.” This comment was broadly and accurately interpreted to demonstrate the contempt Putin has long held for Ukraine, and for the possibility of a strong Ukraine aligned with the West. But few in the West considered that Putin’s words might also reflect the genuine weakness of state formation and cohesion in much of the former Soviet Union. And that this current environment could either vindicate and empower Putin – should he invade eastern Ukraine – or deliver him a resounding defeat.

Russia’s actions in recent weeks reflect Putin’s enduring skepticism of Ukraine and his view of that country’s national aspirations and the strength of the now more than 20-year-old Ukrainian state. The Kremlin appears willing to test Ukrainian state cohesion by backing and inciting pro-Russian agitators and paramilitaries in eastern Ukraine-groups that have already clashed with security forces loyal to Kiev.

If it comes to it, a successful Russian invasion of eastern Ukraine, again under the flimsy pretext of protecting the ethnic Russian population, would guarantee that Ukraine would be unstable, divided and weak for a prolonged period of time. This alone would be a foreign policy victory for the Kremlin. But the downside for Russia is also potentially enormous: A Russian invasion of Ukraine could also lead to a long conflict and an anti-Russian insurgency. And even under the “best” of circumstances for the Russians, the result would be a dysfunctional, split neighbor that is an economic basket case. For Moscow this is preferable to a Ukraine aligned with the West, but it is hardly the solvent ally and reliable partner Russia should desire in a neighbor.

A Russian invasion of eastern Ukraine would put Putin’s assertions about Ukraine to the test; conversely, the Ukrainian state and society would be put to the test as well. If the Ukrainian people rise up in an insurgency, the occupation would fail, leaving Russia either stuck in a long and unwinnable conflict or forced to retreat. The outcome of such a conflict could also threaten Putin’s own hold on power within Russia. On the other hand, if there is no insurgency following the invasion, then Putin could claim vindication that, despite more than twenty years of de jure independence, Ukraine was never really a state.

Many of the post-Soviet states, including Russia for that matter, have failed to build cohesive national narratives, civic nationalism or a viable way to incorporate ethnic minorities into the national polity. Some have succeeded more than others, including the Baltic nations and the nationalist government of Georgia between 2004-2012 led by Mikheil Saakashvili – he built a national consensus around Georgian identity and western aspirations. But Ukraine has, to a substantial degree, failed in this regard, in part due to his far more intertwined history with Russia.

Then there is the profound east-west split within the country, with the western half of the country identifying strongly with Europe, while people in the east have long maintained a strong identification with Russia. The split is exacerbated by strong economic, cultural and familial ties between eastern Ukraine and Russia and the porous border between the two countries, but it also reflects a failure of leadership in Ukraine that goes back at least to 2004, and probably to independence in 1991.

No Ukrainian leader has succeeded in building a national consensus; and few have even tried. Electoral victories over the last decade or so were generally treated as victories for the region supporting the winner, while those out of power generally waited for the next election under the flawed belief that their victory would change everything. By late 2013, before the Euromaidan movement, to be a citizen of Ukraine had little binding meaning or symbolism across the nation. It is possible that the Euromaidan movement and subsequent Russian aggression changed this, but it is not at all clear how much. That failure has given Russia a stronger position, and reason to believe that an invasion of eastern Ukraine might just work.

A Russian takeover of eastern Ukraine would amount to a game of high-stakes poker for Putin. If he got away with it, it would bolster his position at home, and make the point, but leave him further ostracized on the global stage. He would have won an argument, but at a cost. On the other hand, if such a move did not work even in the short run, Putin would have lost both the immediate wager and his long-term strength. Critically, a loss would also justify the Western and Kievan view that the states of the former Soviet Union are independent and able to determine their own future.

One of the difficulties all parties face in the Ukrainian crisis – and even in separating the Crimean question from the larger Ukrainian question – is the degree to which this is a unique situation or one of broader principles. International law is rightly committed to the sanctity of current borders, no matter how many extenuating circumstances Moscow and its sympathizers within eastern Ukraine can create or point to, and so for better or worse the West is forced to stand firm and treat this as a challenge to global norms of acceptable behavior.

After all, many states from Central Asia to Central Africa have little raison d’etre, cohesive national narratives or unifying state institutions. If the collapse of Ukraine (or what would more accurately be a revelation that the state was never strong to survive) can be tolerated more than two decades after its independence, that doesn’t bode well for the stability of many states, or their ability to fend off aggressive neighbors.

Lincoln Mitchell is a scholar and consultant working on political development and the former Soviet Union. His most recent book is “The Color Revolutions” (Penn Press, 2008). This article was originally published in The Weekly Wonk, New America‘s digital magazine.