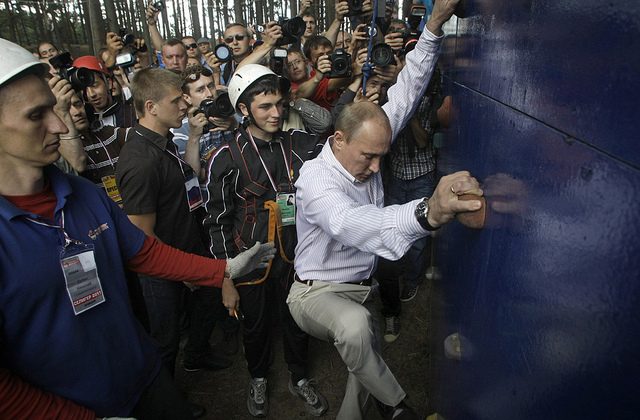 Forbes released its sensational annual list of the “most powerful” people in the world yesterday. Typically, the top spot is reserved for the sitting US president, but this year, for the first time ever, Russia’s Vladimir Putin has taken the coveted title. The last time the US president saw himself knocked off his pedestal was in 2010, when China’s President Hu Jintao edged ahead for a year.

According to Forbes, the jump from the No. 3 position to the top spot is largely due to the perceived increase of this power on the world stage. The year has come with a number of so-called victories for Russia’s top man, including the Snowden PR coup and his diplomatic maneuvering during the Syria crisis to help out his chum Bashar al-Assad.

At home, Putin’s power is unrivaled in Russia’s hollow democracy. While the US president may head the richest and most powerful country in the world, he has the inconvenience of having to contend with a complicated system of checks and balance. This year, the world looked on exasperated as a rancorous congress shut down the government in a ploy to kill the president’s signature healthcare legislation.

Putin, on the other hand, enjoys much wider powers within Russia. Since arriving in power in 1999, he has ruthlessly consolidated power within his own faction and quashed opposition. There aren’t many presidents in the world who can swap places for a few years with their Prime Minister and continue to pull all the strings. Even in China, the president must content with the extremely powerful nine-person Standing Committee of the Politburo.

He is seen as having brought stability and prosperity to a country on the edge of collapse when he came to power. Before the financial crisis put a damper on growth in 2008, the country enjoyed 7% average annual economic growth. With all the money flowing in to state coffers, Putin has lined his own pockets to the tune of some $40-70 billion, while also cutting in the country’s ruling class of corrupt oligarchs, his principal supporters.

At first glance then, it may come as little surprise that Putin comes out on top this year. What Forbes fails to take into account however, is the utter fragility of the power he has amassed. One figure can perhaps best sum up Putin’s perceived success at the reins of Russia: the price of oil. When Putin took over in 1999, a barrel of oil sold for under $40. Today, it’s well over $100.

The Russian government gets half of its revenues from its energy resources and they account for 70% of its exports and a third of the country’s total economic output. Oil money has allowed the regime to spruce up the country’s biggest cities with modern new buildings, but the rest of the country is quietly decaying with little economic activity outside the oil and gas industry. The only thing standing between Putin and political downfall is historically high oil prices.

One study conducted by Citi Group Russia found that Putin will need oil prices of at least $150 a barrel if he wants to make good on his extravagant campaign promises without saddling the government with debt. These promises include a generous $8,300 payment to expecting mothers and an $800 billion renovation of the Russian military. With only one thing standing between him and political and economic ruin, Putin’s international power plays in Syria and Eastern Europe that many tout as a sign of his power are actually little more desperate stop-gap measures.

The US may be wracked with debt, but the economy won’t collapse if oil prices fall and international investors tend to give the US the benefit of the doubt. Even if Americans are in debt up to their eye-balls, they have a dynamic and diverse economy to dig them out. The last time that Russia’s house of cards came tumbling down, however, the country quickly found itself with the sovereign debt rating of Djibouti.