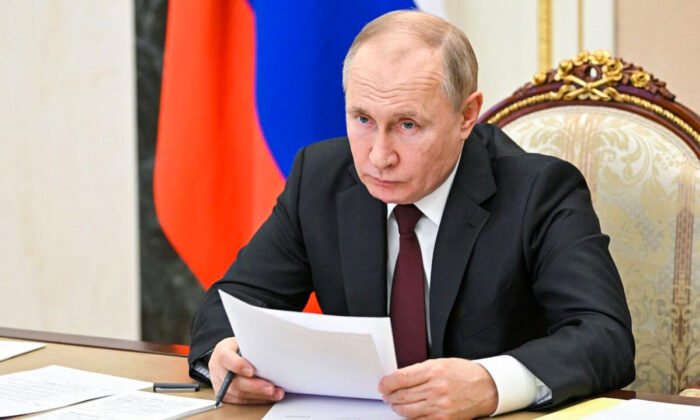 Putin’s Plan B is to Ramp up Attacks Against Ukrainian Civilians: UK Spy Chief

Russian President Vladimir Putin’s “Plan B” is to ramp up attacks against Ukrainian civilians and cities, Director GCHQ Sir Jeremy Fleming warned in a rare address on Thursday.

GCHQ is the UK’s Intelligence, Cyber, and Security Agency. Fleming said Putin’s initial plan is failing more than a month after he launched an “unprovoked and premeditated attack” on Ukraine.

“It’s been shocking in every sense of the word. But it wasn’t surprising,” he said in a speech in Canberra, Australia, according to a transcript released in London on Wednesday. “We’ve seen this strategy before. We saw the intelligence picture building.”

“And we’re now seeing Putin trying to follow through on his plan. But it is failing. And his Plan B has been more barbarity against civilians and cities,” he added.

“It’s clear he misjudged the resistance of the Ukrainian people. He underestimated the strength of the coalition his actions would galvanise,” he continued. “He under-played the economic consequences of the sanctions regime. He over-estimated the abilities of his military to secure a rapid victory.”

“We’ve seen massive bombardment of clearly civilian locations, and so that’s the tactic that has become more prominent as Russian forces have bogged down across the country,” Herbst, senior director of the Atlantic Council’s Eurasia Center, told the news outlet in an interview published Tuesday.

It comes as Russia announced Tuesday it will significantly scale back military operations near the city.

Russian Deputy Defense Minister Alexander Fomin said on Tuesday that Moscow had decided to “fundamentally … cut back military activity in the direction of Kyiv and Chernihiv” to “increase mutual trust and create conditions for further negotiations” amid ongoing negotiations between Ukraine and Russia.

Ukrainian authorities said Wednesday that Russian forces bombarded areas around Kyiv and another city just hours after pledging to scale back operations in those zones.

Fleming separately warned that Russia is hunting for cyber targets and bringing in mercenaries to shore up its stalled military campaign in Ukraine.

“That’s not to say that we haven’t seen cyber in this conflict. We have—and lots of it,” Fleming said.

He said GCHQ’s National Cyber Security Centre has picked up signs of “sustained intent” by Russia to disrupt Ukrainian government and military systems.

“We’ve seen what looks like some spillover of activity affecting surrounding countries,” Fleming said. “And we’ve certainly seen indicators which suggest Russia’s cyber actors are looking for targets in the countries that oppose their actions.”