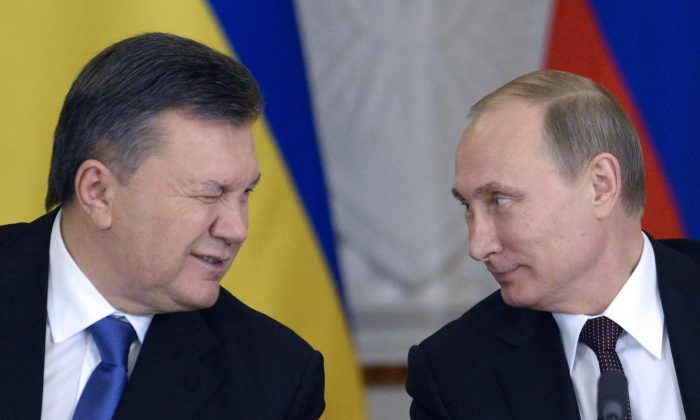 On Nov. 21, Ukraine announced it would not sign an Association Agreement with the European Union at the meeting a week later in Vilnius, Lithuania, of EU leaders and those of six Eastern Partners—Armenia, Azerbaijan, Belarus, Georgia, Moldova, and Ukraine. The agreement would have committed the EU and Ukraine to creating a Deep and Comprehensive Free Trade Area that would lead to more trade and investment between Ukraine and the 28 member states of the EU.

Given Russia’s long-standing economic, military, and cultural ties with Ukraine and President Vladimir Putin’s ambition to expand its customs union with Belarus and Kazakhstan and eventually create a “common economic space” and Eurasian Economic Union of the non-Baltic post-Soviet states, it was clear that Russia would do whatever it could to keep Ukraine from signing the agreement. In the months preceding the Vilnius summit, Russia imposed customs controls or quotas on imports from Ukraine, demanded payment of $1 billion in arrears for gas supplies, threatened to raise the price of gas this winter, and introduced restrictions on Ukrainians entering Russia for work.

Ukraine’s last-minute decision not to sign the EU agreement was thus, perhaps inevitably, cast in geopolitical terms, as the result of a struggle between Europe and Russia over the future alignment of Ukraine. But the scale of the bailout announced after a meeting in Moscow on Dec. 17 between Putin and Ukrainian President Viktor Yanukovych made it clear that, although the consequences may be geopolitical, the impetus for Ukraine’s decision was economic and the struggle one that Europe could have won.

Ukraine is—or at least was until the bailout was announced—on the brink of insolvency. In 2013, it had a current account deficit equivalent to more than 8 percent of GDP and a budget deficit over 6.5 percent. Its foreign reserves cover only three months of imports. It must repay $8 billion in foreign debt this year, including $3.7 billion to the International Monetary Fund on its 2008 loan. And it must pay Russia about $12 billion a year for gas. With a large current account deficit, a substantial budget deficit, few reserves, large hard currency debt repayments due, and even larger payments to Russia for gas, Ukraine was only months away from a default.

In the autumn, the EU and the IMF discussed a possible standby arrangement for Ukraine similar to the $15.5 billion arrangement provided in 2010. But it was clear from the outset that, both because of the severity of the economic crisis in Ukraine and the suspension of the 2010 arrangement after only $3.4 billion had been disbursed because it had refused to implement one of the conditions, any assistance would come with tough conditions.

However beneficial those conditions might be in the long run, it was also clear their immediate effect would be costly in political terms, not least for Yanukovych who faces re-election in early 2015. Greater exchange rate flexibility for Ukraine’s currency would cause it to depreciate against the dollar, thereby increasing the cost of imported oil and gas, both of which are priced in dollars. Ukraine would also have to phase out its substantial household subsidy for the cost of energy, the condition in the 2010 arrangement it refused to implement.

In early November, Putin and Yanukovych agreed in two lengthy secret meetings that, in return for not signing the EU agreement and resuming talks about closer trade ties with Russia, Ukraine’s disputed gas bill would be settled, the price of its future gas deliveries would be reduced, the recently imposed customs controls and import quotas would be ended, and Russia would provide additional financial assistance.

As the Vilnius summit drew near, it became apparent that any assistance from the IMF and EU would not only be accompanied by tough conditions but would fall far short of what Ukraine needed in order to avoid a default—assistance in the range of $15 billion to $20 billion. An IMF letter to the Ukrainian government on Nov. 20 formally offered $5 billion and noted it would have to repay the $3.7 billion due on the 2008 loan. The EU offered 610 million euros, about $840 million, with the IMF conditions. The next day Yanukovych announced Ukraine would not sign the EU agreement.

On one level, the decision was not surprising. There are, of course, many in Kyiv and western Ukraine who think of themselves as European, supported the Orange Revolution and its leaders—Viktor Yushchenko, elected president in 2004, and Yulia Tymoshenko, the now-imprisoned former prime minister and 2010 presidential candidate—and dream of someday joining the EU.

But there are many others, especially in the country’s predominantly Russian-speaking industrial heartland in the east and in southern Ukraine, who feel themselves linked by culture and economic interest to Russia, supported Yanukovych, a former governor of Donetsk oblast, in the 2004 and 2010 presidential elections, and favor closer ties with Russia, which remains, more than two decades after the demise of the USSR, Ukraine’s leading trade partner.

And there can be no doubt where Yanukovych’s sentiments lie. During the 2004 presidential election, Putin visited the country twice to campaign for him. His first major policy initiative after winning the 2010 presidential election was to extend Russia’s long-term lease on its port facilities at Sevastopol, the base for its Black Sea fleet. The second was legislation that prohibits Ukraine from entering any military alliance, thereby ruling out the possibility of future membership in NATO.

Nevertheless, the EU and the IMF could have provided Ukraine the needed financial assistance and moderated the short-term impact of its conditions. But for whatever reason—whether because of acute eurozone crisis fatigue, EU preoccupation with creation of a banking union, aversion to committing funds to a nonmember of the EU that had flouted the conditions of a previous standby, aversion to helping Yanukovych and his government, or knowledge of the early-November agreement between Putin and Yanukovych—and despite the fact that they committed hundreds of billions of euros to a handful of eurozone members over the past four years, they turned their backs on Ukraine and in so doing opened the door for Putin.

After Putin and Yanukovych met in Moscow on Dec. 17, it was announced that Russia will purchase $15 billion of Ukrainian government debt through its National Wealth Fund, which receives a portion of the state’s oil and gas revenues, and lower the price of gas supplied to Ukraine’s state-owned Naftogaz by one-third, equivalent to $4 billion on an annual basis.

They of course denied that Ukraine’s future membership in Russia’s Customs Union with Belarus and Kazakhstan was a condition for the bailout. But the bailout greatly increases the odds that Ukraine will, at some future time, join the Customs Union, if only because its economy will become even more closely tied to, and dependent upon, Russia’s than it is today.

If some day years hence, the world wakes up to the news that Ukraine has joined the Customs Union and committed itself to participating in the “common economic space” and Eurasian Economic Union that Russia envisions, historians will look back to late 2013 and ask why the EU and IMF didn’t have the foresight to assist Ukraine when it needed their assistance.

David R. Cameron is a professor of political science at Yale University and director of its program in European Union studies. Copyright 2014 The Whitney and Betty MacMillan Center for International and Area Studies at Yale.