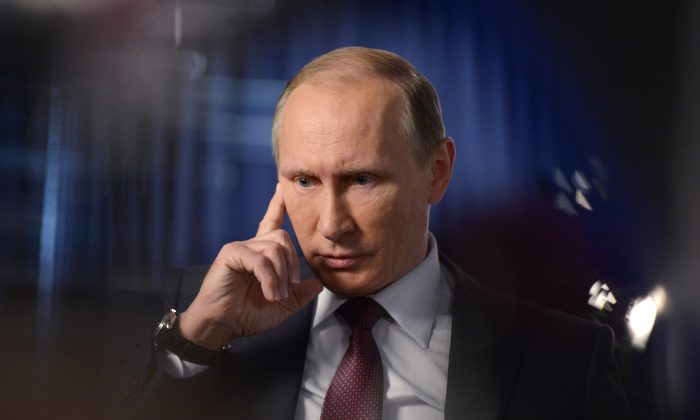 Putin moves to stabilize Syria, stop extremism and diminish US influence, but the strategy could backfire

Russian President Vladimir Putin is remaking the Middle East by boldly creating facts on the ground. The recent military buildup and the initial airstrikes against targets inside Syria mark Russia’s return as a major strategic actor for the first time since the Yom Kippur War of 1973 that pitted Arab nations against Israel.

The Kremlin is finding it hard to hide its self-satisfaction with its rapid military intervention in Syria. Tactically it took the United States by complete surprise—even today Washington professes not to know what Russia is up to—and Putin must be bemused as Washington flounders for a response while issuing empty threats and warnings backed up by no concrete action.

Putin stole the show at the United Nations General Assembly. Who remembers that Chinese President Xi Jinping, Indian Prime Minister Narendra Modi and a host of other world leaders had gathered to celebrate the 70th anniversary of the U.N. founding?

Putin boxed in President Barack Obama, compelling him to agree to a bilateral meeting on Syria and Ukraine, thereby making a mockery of the 18-monthlong U.S. effort to isolate him diplomatically. Contrary to earlier expectations, Putin escaped widespread scathing media criticism of his actions in Ukraine. Indeed, Western commentators write as if he holds the keys to stability in the Middle East and peace in Ukraine, even as many continue to demonize him. In short, Russia matters—and that matters much to Putin.

It also matters that Russia is now exercising initiative in Syria. The immediate goal is to bolster the beleaguered Assad regime, which Putin sees as a bulwark against extremist forces—and he is certainly right that the only possible alternative to Assad in Syria today is extremists of one sort or another. To that end, Putin has forged a coalition with Assad, Iran, Iraq, and the Lebanese Hezbollah and launched the first airstrikes against anti-Assad rebels, the U.S.-backed moderate opposition, which he considers terrorists and unacceptable partners in any political transition. Russia has also hit ISIS in Iraq and Syria targets, albeit with lesser intensity.

Russia’s immediate goal is to bolster the beleaguered Assad regime as a bulwark against extremist forces.

Russia will likely step up the tempo in coming days for ISIS does indeed pose a serious threat: More than 2,000 Russian citizens have joined ISIS in Syria; ISIS supporters can be found across Russia, including in and around Moscow; terrorist groups in the Russian North Caucasus have pledged loyalty to ISIS, which in turn has declared that region “awilayat,” or an ISIS province; and ISIS has extended its reach into the fragile Muslim-dominated Central Asian states along Russia’s southern periphery.

Russia’s actions are not simply about Assad and ISIS; they are, more importantly, about reshaping the geopolitical landscape in the Middle East. The military buildup is obviously intended to secure Russia’s foothold on the Eastern Mediterranean, including the naval facility at Tartus and the new airbase in Latakia. That ensures Russia a seat at the table in any future geopolitical reckoning in the Middle East.

Russia’s active military presence in and of itself necessarily entails a diminished US position.

At the same time, Russia’s active military presence in and of itself necessarily entails diminishment in the U.S. position. Putin drove the point home at the United Nations with a call for creating “a ‘genuine’ broad-based international anti-terrorist coalition,” [highlight added], while railing against U.S. actions in recent years that had, he argues, only fueled the rise of extremists including ISIS.

Moreover, that Putin has dramatically backed Bashar al-Assad, his ally, will not be lost on Middle Eastern leaders with doubts about America’s commitment to their security after the U.S.-supported ouster of Egyptian strongman and U.S. ally Hosni Mubarak, America’s waning presence in Iraq and, so far, its ineffective campaign against ISIS. Finally, key regional U.S. partners and allies—Egypt, Israel, Saudi Arabia, and Turkey—will now have to adjust to the new realities Russia is creating.

A flurry of diplomatic activity in recent weeks indicates that Moscow is working hard to reach accommodations with all of them at America’s expense. A show of power helps in a region that respects power. But Putin’s bold move, however satisfying to the Kremlin, comes with huge risks.

Domestic support is not guaranteed, despite the Kremlin’s formidable capacity to shape public opinion. Russians might like to see their country acting grandly on the global stage, but a recent poll suggests two-thirds are opposed to sending ground troops to support Assad.  The Kremlin has ruled that out for the time being, but that figure suggests there are limits to how far the nation can go in pursuing its goals, especially if the resistance proves stiffer than anticipated.

Nor is military success guaranteed. This is the first time Russian forces have been called upon to conduct sustained combat operations beyond the borders of former Soviet space since the Afghan adventure in the 1980s, which ended in sorrow and humiliation. This operation will have its share of setbacks—any sustained military operation does—which will lead to internal debates about its advisability. Those debates will come at a time when the Russian military is overstretched.

As the economy at best stagnates, the military must manage a continuing conflict in Ukraine, support stepped-up strategic reconnaissance against NATO, build up its presence in the Arctic, and prepare for a possible new anti-terrorist front in Central Asia as security in Afghanistan deteriorates—witness the Taliban’s temporary seizure of Kunduz, a key provincial center. Something has to give somewhere in the not-too-distant future.

Putin is not the master of this game. He inserted Russia into a dynamic conflict with no clear path to success.

Most dangerous, however, is that Putin is not the master of this game, despite the Kremlin’s bravado. He has inserted Russia dramatically into a dynamic conflict with no clear path to success. The risks of the war spreading or of Russia’s becoming bogged down in a quagmire are far from negligible.

Should the Russian offensive falter, Israel, Saudi Arabia, Turkey, and the United States will see an opening to contain and undermine Russia and its Shiite coalition, perhaps with greater assistance to anti-Assad rebels or bolder military action, such as enforcing limited no-fly zones and establishing humanitarian corridors and sanctuaries inside Syria. In addition, accidents are inevitable with major military forces operating in close proximity and, if not handled properly, could lead to open conflict. In short, the uncertainties abound.

What is certain is that Putin’s goal is to remake the Middle East. He doesn’t know how, and he has set in motion a dynamic he does not control. Other powers and forces will have a say, especially the United States. And Putin must know that the United States has greater capacity to shape developments than Russia does by orders of magnitude.

Putin is betting that the current U.S. administration lacks the skill to devise an effective counterstrategy and the will to act decisively. The next few weeks will tell if he is right. But no matter what the United States does or does not do, its response will be at least as influential in reshaping the Middle East as Putin’s actions.

Thomas Graham, a senior fellow at the Jackson Institute for Global Affairs, was senior director for Russia on the U.S. National Security Council staff (2004–2007). Copyright © 2015 YaleGlobal and the MacMillan Center. This article was previously published on Yaleglobal.yale.edu