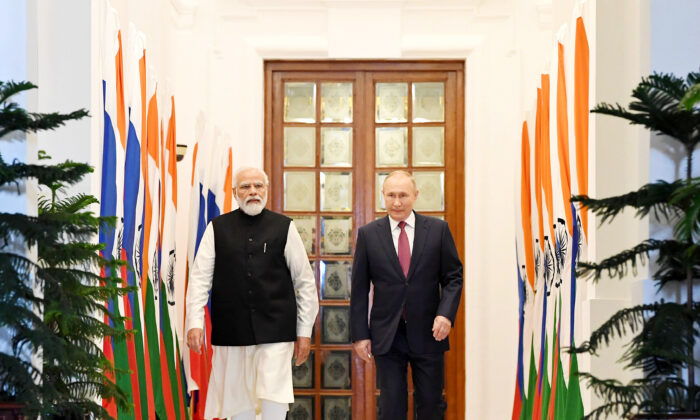 The brief Monday summit between Putin and Indian Prime Minister Narendra Modi took place hours after the inaugural 2+2 dialogue between the foreign and defense ministers of the two nations. In all, the two countries signed 28 deals that included government-to-government pacts in several areas.

In remarks after the summit, Modi said that there have been “fundamental changes” at the global level in the last several decades and that many “new geopolitical equations” have emerged.

“But India-Russia friendship has been a constant among all these variables,” Modi said. “Both the countries have not only cooperated with each other without any hesitation but have also taken special care of each other’s sensitivities.”

Aparna Pande, director of the Initiative on the Future of India and South Asia at the Washington-based Hudson Institute, told The Epoch Times that the talks indicate a significant strategic element.

“Indian officials may speak of a historical and close relationship with Russia, but there is a strategic dimension to these ties: India wants to ensure that Russia does not get too close to China, that Russia does not sell high-value military equipment to Pakistan, and that Russia continues to keep India’s interests in mind when it comes to the region.”

Harsh V. Pant, director of the strategic studies program of the Delhi-based Observers Research Foundation, told The Epoch Times over the phone that Putin’s visit to India shows that both India and Russia prefer “multipolarity” in the evolving world order.

“Neither wants to see a single country dominating the indo-pacific or world politics in any significant way,” said Pant. “They prefer diffusion of power and they prefer multipolarity in a polycentric world order. For that they are willing to work with each other as well as with other countries.”

“Xi Jinping’s assertive foreign policy is coming as a challenge for many countries including Russia and India,” Panda told The Epoch Times in an email. “Even though Russia’s relations with China are relatively stable; still Russia is facing a continuous challenge in dealing with the Chinese economic inroads in Central Asia and in the broader Eurasian region.”

Russia and China associate with India through the Shanghai Cooperation Organization, Association of Brazil, Russia, India, China and South Africa, and the Asian Infrastructure Investment Bank, and by strengthening its partnership with India at various multilateral platforms, Panda said Moscow wants to counterbalance the Chinese Communist Party’s influence and dominance.

“Putin’s visit to India in the post-pandemic period lays the groundwork for this multilateral cooperation,” said Panda.

Madhav Nalapat, strategic analyst and vice-chair of the Manipal Advanced Research Group, told The Epoch Times that Putin must maintain Russia’s “self-respect” by not accepting Chinese “diktat,” including its double-talk on terrorism.

“It is disappointing that Russia joined China in ensuring that LeT [Lashkar-e-Taiba] and JeM [Jaish-e-Mohammed] were not mentioned in the joint communique of India-China-Russia foreign ministers. China claims it opposes terrorism but strengthens the Pakistan military, which is the nursery of terror,” said Nalpat adding that India will stand by an independent Russia but cannot back a satellite Russia which is what Beijing wants Moscow to become.

The Foreign Ministers of India, China, and Russia met online for their 18th trilateral cooperation meeting on Nov. 26. LeT and JeM are international terrorist organizations based in Pakistan.

“Putin must ensure that Modi’s example of strategic autonomy gets followed by him as well. The visit to India will help that process,” said Nalapat.

India recently purchased Russia’s S-400 air defense system while China has already deployed the same system in its airbases in Xinjiang and Nyingchi in Tibet, allegedly to intercept India’s maneuvers and to keep its rival in check.

Pande said India’s purchase of the S-400 system from Russia is “heavily tied” into the threat it faces from China.

“There is a historical context as well: Till the Sino-Soviet split, the Soviet Union while positively disposed to India, supported China, not India (e.g. in the 1962 war). It is only after the split that the Soviet Union became closer to India,” she said.

“With the rising salami-slicing moves by China along India’s northern border, China’s presence among all of India’s South Asian neighbors and China’s penetration into India’s sphere of influence, the Indian Ocean region, Delhi would like to make sure that Russia is either neutral or in India’s camp, if and when any future conflict takes place,” said Pande. “One way to do that, again, is to purchase more from Russia.”

Putin held talks with U.S. President Joe Biden for two hours in a video conference on Tuesday and Nalapat said that by meeting Putin the day before the Biden-Putin talks, Modi has showcased India as independent of its closest security partner, the United States.

India, the United States, and Russia should understand that they face a common threat from China, said Nalapat.

Pande said the United States understands India’s concerns but both countries have differing views on Russia.

“The U.S. still views Russia as a threat both on the domestic and global front; India believes China is the bigger threat and that Russia can be weaned away from China,” said Pande.

“India is a close American partner and friend but it is not a military ally of the U.S., unlike many other countries in the Indo Pacific or the other members of the Quad. So India has a lot more leeway to continue with its policy of strategic autonomy and keep relations with countries like Russia, or even Iran, whom the U.S. views as threats.”

Panda said that the takeover of Afghanistan by the Taliban has forced Russia to look at the Afghanistan crisis afresh.

“Even though Russia in principle would like to see the Taliban holding power in Afghanistan, there is a realization in Moscow that the practical security imperative in Afghanistan and the wider region is not in favor of Russia. Hence, Russia needs India’s partnership to address the new security challenges that the region will be posing,” he said, adding that Putin’s visit to India offers a fresh context to think and plan on how India and Russia can cooperate on the Afghanistan issue.

Pande said India should work for a multi-faceted relationship with Russia similar to the one it enjoys with the United States and should continue with its defense and energy purchases.