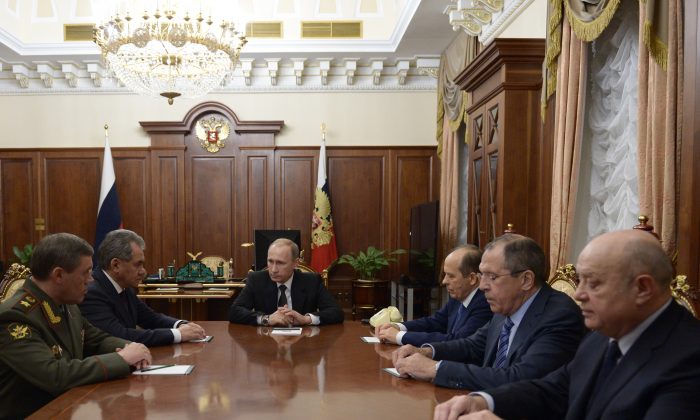 MOSCOW—A somber President Vladimir Putin vowed to hunt down and punish those responsible for a bomb that brought down a Russian passenger jet last month, “wherever they are hiding.” Intensified Russian airstrikes Tuesday hit the Islamic State (ISIS) stronghold in Syria that also is being pounded by the French military.

Russia’s FSB security service confirmed for the first time that a homemade bomb caused the Oct. 31 crash of the Metrojet Airbus 321-200 in Egypt’s Sinai Desert and killed all 224 people aboard in what it called “a terrorist act.” ISIS had already claimed responsibility, saying it was punishing Moscow for its air campaign in Syria.

With Russia striking ISIS targets in reprisal for the Metrojet downing, France hitting militants in response to the attacks on civilians in Paris last week and the ongoing U.S.-led coalition bombings, the extremists were facing a stepped-up assault from at least three military powers. But the Kremlin said it was too soon to call it a de facto alliance.

Putin heard the report on the Metrojet bombing at a late-night meeting of his security advisers in the Kremlin that was shown on national television. He and his advisers stood for moment of silence for those who died on the plane, mostly Russian vacationers flying from the Red Sea resort of Sharm el-Sheikh to St. Petersburg.

An unusually subdued Putin called it “one of the bloodiest crimes,” and promised retribution for “the murder of our people in Sinai.”

“We will not wipe away the tears from our souls and our hearts. This will stay with us forever,” he said.

The FSB offered a $50 million reward for information leading to the arrest of those responsible, and Putin said Russia would be relentless in its pursuit.

“We’re going to look for them everywhere wherever they are hiding. We will find them in any place on Earth and punish them,” he said.

FSB head Alexander Bortnikov said a bomb containing the equivalent of 1 kilogram (2.2 pounds) of TNT went off aboard the Airbus, causing it to break apart in the air, which explains why the fuselage was scattered over such a large territory. I can certainly say that this was “a terrorist act,” Bortnikov said.

He said tests showed the explosives had been produced outside of Russia, but gave no other details.

Egyptian Prime Minister Sherif Ismail said his government was informed only on Tuesday of the results of the Russian investigation, and he shied away from endorsing its conclusion that a bomb was to blame. Speaking in Sharm el-Sheikh following a Cabinet meeting there, Ismail said Egypt would “bear in mind” the Russian conclusion.

Aviation Minister Hossam Kamal, meanwhile, sought to cast doubt on the Russian declaration, saying the technical investigation into the crash by experts from Egypt, Russia, France and Ireland had not concluded.

Egyptian authorities opened an investigation into a possible security breach or infiltration by militants of the Sharm el-Sheikh airport staff, security officials said. The investigation has focused on baggage handlers, their security supervisors and also personnel involved in aircraft catering, according to the officials, who spoke on condition of anonymity because of the sensitivity of the case.

Egypt is concerned about the impact on its tourism industry. Sharm el-Sheikh was particularly popular with Russian tourists, who in 2014 accounted for nearly a third of the nearly 10 million visitors to Egypt.

Russia has suspended all flights to Egypt. Russia also has banned Egypt’s national carrier from flying to Russia.

Putin’s meeting at the Kremlin was held immediately upon his return from Monday’s summit with President Barack Obama and other world leaders in Turkey, where they vowed to work together to combat ISIS following Friday’s attacks in Paris that killed 129 people. ISIS has claimed responsibility for those bombings and shootings.

Putin ordered the Russian missile cruiser Moskva, currently in the Mediterranean, to start cooperating with the French military “as allies” on operations in Syria. He said a French aircraft carrier task force was to approach the Moskva soon.

The plane crash and the Paris attacks clearly have raised Russia’s determination to fight ISIS, although Western concerns remain that its airstrikes also are hitting rebels who oppose Syrian President Bashar Assad but are not affiliated with radical groups.

Putin said that Russia’s air campaign in Syria “should not only be continued but should be intensified so that the criminals realize that retribution is inevitable.”

The cruise missiles that hit the Aleppo and Idlib positions were fired from supersonic Tu-160 bombers and from Tu-95s, long-distance turboprop strategic bombers that started from Russian territory, he added.

French President Francois Hollande, who stayed away from the G-20 summit because of the Paris attacks, said he would travel to Moscow next week to help forge a military coalition against ISIS.

France also made an unprecedented demand that its European Union allies support its military action against ISIS. It invoked a never-used article of the EU’s Lisbon Treaty obliging members of the 28-nation bloc to give “aid and assistance by all the means in their power” to a member country that is “the victim of armed aggression on its territory.”

Le Drian said all EU partners responded positively, and they could help “either by taking part in France’s operations in Syria or Iraq, or by easing the load or providing support for France in other operations.”

Kremlin spokesman Dmitry Peskov was asked by reporters if Putin’s order about the Moskva cooperating with the French meant there was a de facto coalition on Syria involving Moscow and Paris. He replied: “For now, it’s premature to say this.”

Putin said Russia is “relying on all of our friends.”

“We will act in accordance with the U.N. Charter’s Article 51, which gives each country the right to self-defense. Everyone who tries to aid the criminals should understand that they will be responsible for giving them shelter,” he said.

An image posted on the Facebook page of Russian Foreign Ministry spokeswoman Maria Zakharova apparently sought to show solidarity between Russia and France. Similar to the popular meme of the Eiffel Tower inside a circle forming a peace symbol on the French tricolor, the image on Zakharova’s page shows a jet plane in a circle superimposed on the white, blue and red of the Russian flag.