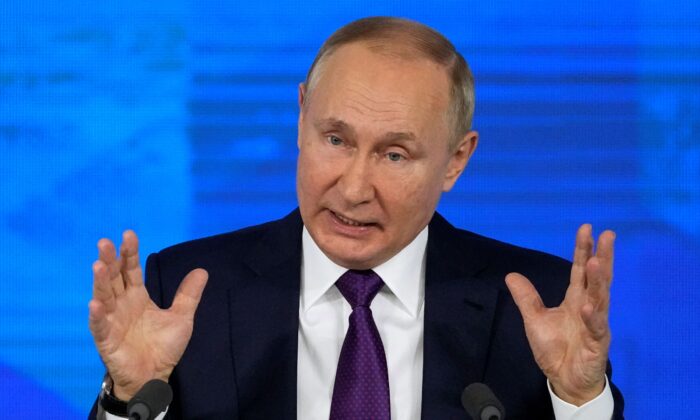 MOSCOW—Russian President Vladimir Putin urged the West on Thursday to move quickly to meet Russia’s demand for security guarantees precluding NATO’s expansion to Ukraine and the deployment of the military alliance’s weapons there.

Speaking during a marathon annual news conference, the Russian leader welcomed talks with the U.S. that are set to start in Geneva next month, but warned the discussion focused on Moscow’s demand needs to produce quick results.

“We want to ensure our security,” Putin said. “We put it straight: there must be no further expansion of NATO eastward.”

A key principle of the NATO alliance is that membership is open to any qualifying country. The United States and its allies have said they won’t give Russia the kind of guarantee on Ukraine that Putin wants. American officials are conferring with European allies in advance of the Geneva talks.

Moscow presented its demand amid soaring tensions over a Russian troop buildup near Ukraine that has stoked fears of a possible invasion. U.S. President Joe Biden warned Putin in a conference call earlier this month that Russia will face “severe consequences” if it attacks Ukraine.

During his annual news conference, Putin accused the West of trying to make Ukraine “anti-Russia, constantly beefed up with modern weapons and brainwashing the population.”

He argued that Western weapons could encourage hawkish forces in Ukraine to attempt to regain control over Russia-backed separatist regions by force and even try to reclaim Crimea, which Russia annexed from Ukraine in 2014.

Putin has denied having plans to launch an attack but has described a NATO expansion and weapons deployment in Ukraine as a “red line.”

Russia annexed Ukraine’s Crimean Peninsula in 2014 and shortly after cast its support behind a separatist rebellion in the country’s east. The fighting, which started more than seven years ago, has killed over 14,000 people and devastated Ukraine’s industrial heartland, known as the Donbas.