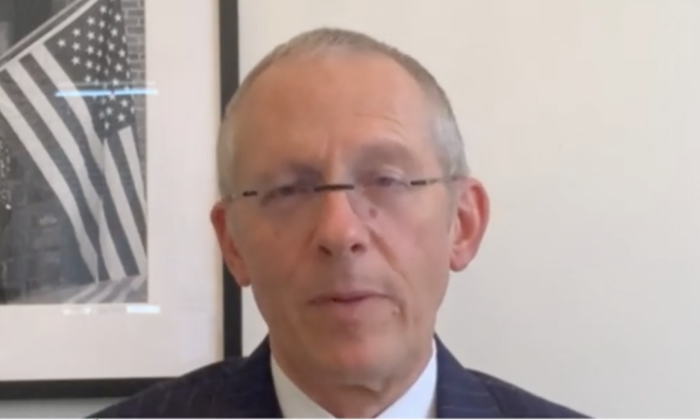 Author of “The Ukraine Hoax” Michael Caputo on NTD's "Capitol Report," on March 3, 2022. (NTD/Screenshot via The Epoch Times)
Russia-Ukraine War

Michael Caputo, who spent years in Russia during the Clinton administration, said that Russian President Vladimir Putin has underestimated Ukrainian President Volodymyr Zelensky and the resistance he would face when he invaded their country.

“Putin underestimated the Ukrainians, he underestimated Zelensky, he thought Zelensky would run like most other post-Soviet Ukrainian rulers would have … What happened when he didn’t run? Putin completely didn’t understand what to do next,” Caputo, who authored the book “The Ukraine Hoax,” told the host of NTD’s “Capitol Report.”

Caputo, whose in-laws are still in Ukraine, thinks the fighting will be prolonged because the Ukrainian people will continue to resist and will protect Zelensky from Russian assassination attempts.

“Unfortunately, the Russians seem to be dead set on assassinating him,” said Caputo. “I think Ukrainian people will fold around him to protect him.”

From the beginning of the invasion, Zelensky made it clear he would not leave even though Russia has marked him as its top enemy.

“It’s going to take a long time. And a lot of people are going to get killed in the meantime. And if the Russians take out Zelensky, I’m afraid they will create a martyr and Ukrainian people will never ever give up,” Caputo added.

Caputo said he met Zelensky on one of his trips to Ukraine and thinks he is a “good man” who has been attacked by his opponents as being corrupt.

“But nobody, even his biggest detractors, can put a finger on how he was corrupt,” said Caputo. “So in fact, he’s turned out to be a pretty straightforward leader, the leader that the Ukrainian people deserve.”

Given how Putin has dealt with past invasions and the level of resistance Ukrainians are showing, Caputo thinks this will only cause Putin to take more extreme measures, even beyond sacrificing his country’s young men.

“These soldiers that they’re capturing, that are getting killed, these Russian soldiers, these are what the Russians call cannon meat. We call it cannon fodder. Every day that Zelensky and Ukrainians hold on, Vladimir Putin is going to turn the volume up more and more and kill more and more civilians and commit more and more war crimes.”

Zelensky has shown no sign of conceding, and even turned down an evacuation offer from the United States on Feb. 26, according to the Ukrainian Embassy in the UK.

“The fight is here. I need ammunition, not a ride,” Zelensky told the United States, according to the embassy.

Caputo believes the war on Ukraine will mark the fall of Putin but will come at a high cost.

“In the end, I think this is going to show the end of Vladimir Putin’s presidency, but he’s going hold on every inch of his life, and I think the Ukrainian people are really going to suffer for it,” said Caputo.