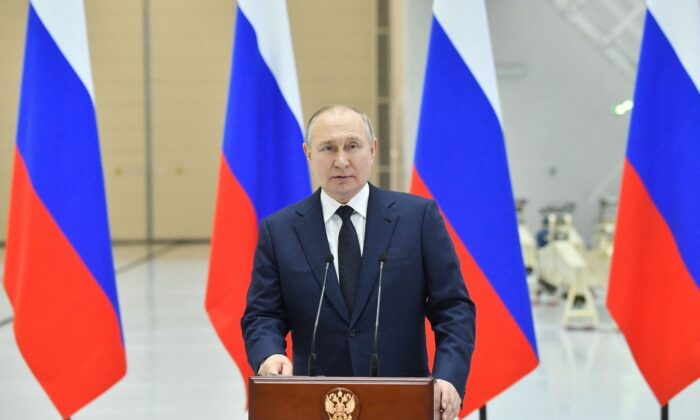 Putin’s Showdown with Ukraine on Crimea and Donbass

Russia-Ukraine Ceasefire Talks Slow Down as Both Sides Arrive at Heart of the Matter: Territory Disputes
By Allen Zhong

Russian President Vladimir Putin Tuesday clarified his stance on Crimea and Donbass, the disputed territories on the Russia-Ukraine border area.

He appears to be unhappy with Ukraine’s ambiguous stance on the separatist or disputed territories and clearly stated that Russia is demanding Ukraine recognize Crimea as Russian and so-called Donbass republics as independent.

Putin emphasized that these two points are the key topics that the two sides have made no progress on, Russian state media RT reported.

The ceasefire talks “returned to a deadlock,” he stated at the Vostochny Cosmodrome in Russia’s Far East.

Ceasefire talks have apparently slowed down as Russia and Ukraine get to the heart of the matter: territory disputes.

Ukrainian President Volodymyr Zelenskyy acknowledged in early April that the intention of Russia’s military operation is to occupy the corridor connecting Crimea and Donbass, with Mariupol being a key city along the corridor.

“Donbass, and the south of Ukraine, and the corridor to Crimea, and the Kherson region, and the Zaporizhzhia region,” he said. “We basically understand what they are doing.”

He also told Ukrainian media that it could cost thousands of soldiers’ lives to take back Donbass and Crimea.

Ukraine could also end up unable to take back those areas militarily, Zelenskyy said.

“Russia has its own vision of Donbass, and Ukraine has its own. So I had a simple suggestion. I believe that we will not be able to agree on all points at once. This is impossible, even if we have negotiations,” he said.

However, the former Soviet country insisted on setting aside the disputed areas in the ongoing potential ceasefire deal and demanded more time to solve it through negotiations.

During an interview with CBS on Sunday, Zelenskyy expressed a completely contrary viewpoint from what Putin had hoped for.

“Overall, we’re not ready to give away our country. I think we already gave up a lot of lives,” he responded when asked if he’s willing to give up any part of Ukraine for peace. “So we need to stay firm for as long as we can. But this is life—different things happen.”

He then specifically stated Ukraine’s stance on Crimea and Donbass.

“We understand the Russian side. We understand one of their provisions that is always talked about, is to recognize Crimea as Russian territory. I will definitely not recognize that,” he said.

Zelenskyy again reaffirmed that taking back Crimea and Donbass is not part of Ukraine’s plan for “victory.”

“I understand they will not withdraw from Crimea and will be arguing or negotiating one territory or another in the South of our country, the Donbass. I know exactly what has to happen after which we can say ‘this is victory [for Ukraine],'” he said.