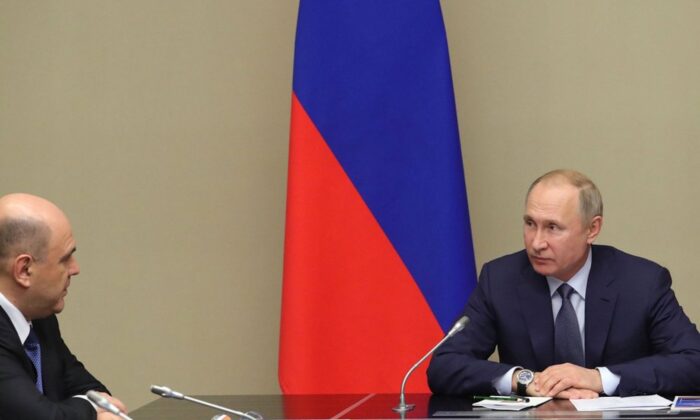 MOSCOW—Russian President Vladimir Putin on Monday submitted to parliament a package of constitutional amendments widely seen as an attempt to secure his grip on power well after his current term ends in 2024.

The Kremlin-controlled lower house, the State Duma, received a draft bill on constitutional proposals from the Kremlin and quickly scheduled the first of three required readings for Thursday.

Putin, 67, has been in power for more than 20 years, longer than any other Russian or Soviet leader since Josef Stalin, who led from 1924 until his death in 1953. Under the law now in force, Putin must step down as president when his current term ends.

Putin proposed that the constitution must specify the authority of the State Council, an advisory body that consists of regional governors and top federal officials. The Kremlin’s constitutional bill submitted to parliament empowers the Council to “determine the main directions of home and foreign policy,” its specific authority yet to be spelled in a separate law.

Observers say that the proposed changes could allow Putin to stay in charge by shifting into the position of the Council’s head.

While proposing to give parliament more say over Cabinet ministers’ appointment, Putin emphasized that the president should retain the power to dismiss the prime minister and Cabinet ministers and remain in charge of the Russian military and law enforcement agencies. That makes it unlikely that Putin could opt for shifting into the prime minister’s seat as some have speculated.

The Kremlin bill also modifies the constitution to limit a president to two terms altogether, unlike the current version containing a limit of two consecutive terms.

Putin served two presidential terms in 2000-2008 and then shifted into the prime minister’s position to observe the term limit but effectively remained in charge while his associate Dmitry Medvedev served as a placeholder president in 2008-2012. Medvedev obediently stepped down to allow Putin to reclaim the top job and move into the premiership after amending the constitution to extend the president’s term from four years to six.

Immediately after proposing the constitutional changes, Putin last week fired Medvedev, who had the job for eight years and named tax chief Mikhail Mishustin to succeed him. The Russian president is yet to appoint the new Cabinet.

Some commentators speculated that the proposed tweak of the term limit as a sign that Putin could be eyeing another swap with Medvedev and wants to limit his protege to just one term legally.

Putin’s amendments include a proposal to give the constitution a clear priority over international law—a tweak seen as a reflection of the Kremlin’s irritation over the European Court of Human Rights’ rulings that held Russia responsible for human rights violations.

Duma speaker Vyacheslav Volodin hailed the suggested constitutional amendments as “historic,” following Putin’s description of them as offering “more power to the people.”

Parallel to lawmakers, a working group created by Putin will also consider the proposed changes before they are put to the vote.

Putin said that the constitutional changes need to be approved by the entire nation, but it wasn’t immediately clear how such a vote would be organized.

Russia’s leading opposition politician, Alexei Navalny, and other Kremlin foes have denounced Putin’s move as an effort to extend his rule after his term ends. Still, it didn’t immediately trigger any significant protest. The vagueness of proposed changes helped mute the public response, and the dismissal of Medvedev, along with his Cabinet, also diverted attention from the suggested amendments.

Opposition activist Ilya Yashin called for a massive protest in Moscow on Feb. 29 to protest against the “usurpation” of power.