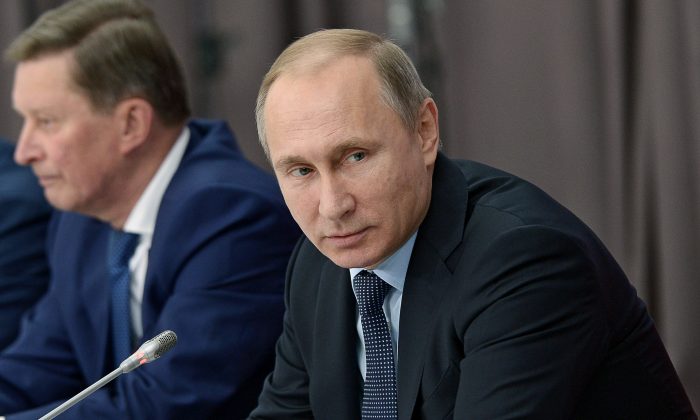 In a move raising the potential threat of a Russia-NATO conflict, Russia says it will deploy long-range air defense missiles to its base in Syria and destroy any target that may threaten its warplanes following the downing of a Russian military jet by Turkey.

The incident, the first time in half a century a NATO member shot down a Russian plane, may put Moscow and the alliance on the verge of a direct conflict. If Russia shoots down a Turkish plane, Turkey, a NATO member, could proclaim itself under attack and ask the alliance for military assistance.

The situation is even more alarming, as Russian and Turkish presidents are strong leaders reluctant to back down and seek a compromise. Most observers believe that while a direct military confrontation will be unlikely, the shooting down of the plane will further fuel the Syrian conflict and complicate international peace efforts.

The S-400 missiles, which Russian President Vladimir Putin ordered to be sent to the Hemeimeem air base in Syria’s coastal province of Latakia just 50 kilometers (30 miles) away from the border with Turkey, are capable of striking targets within a 400-kilometer (250-mile) range with deadly precision.

It will be ready to destroy any aerial target posing a potential danger to our aircraft.
— Sergei Shoigu, defense minister, Russia

“It will be ready to destroy any aerial target posing a potential danger to our aircraft,” Russian Defense Minister Sergei Shoigu said at a meeting with military officials. He added that from now on, Russian bombers will always be escorted by fighters on combat missions over Syria, and announced the severance of all military ties with Turkey.

The Russian plane’s downing marked a dramatic turnaround in relations between Russia and Turkey.

Ozgur Unluhisarcikli, director of the German Marshall Fund in Ankara, said the downing of a Turkish plane by Russia is also a possibility.

“Turkish planes violate the Syrian border daily, either for reconnaissance flights or for anti-IS operations,” he said. “In the same way that Turkey argues it has rules of engagement, Russia could also declare its own rules of engagement, saying it has right to protect the skies of its ally.”

The Russian plane’s downing marked a dramatic turnaround in relations between Russia and Turkey, who have proclaimed one another “strategic partners” in the past and developed booming economic ties despite differences over Syria.

Putin described the Turkish action as a “crime” and a “stab in the back,” and called Turkey an “accomplice of terrorists.” In a sign of escalating tensions, protesters in Moscow hurled eggs and stones at the Turkish Embassy, breaking windows in the compound. Police cleared the area and made some arrests shortly after the protest began.

Turkish President Recep Tayyip Erdogan, who has often been compared to Putin for his authoritarian ways, said Wednesday that his country doesn’t wish to escalate tensions with Russia.

If Russia-Turkey tensions escalate further, both countries potentially can inflict significant pain on one another in many areas.

Russia was the biggest source of Turkish imports last year, worth $25 billion, which mostly accounted for Russian gas supplies. Most Turkish exports to Russia are textiles and food, and Turkish construction companies have won a sizable niche of the Russian market.

Analysts said Turkey doesn’t have the option of closing the Turkish Straits to Russia, which has used the route to supply its forces in Syria. According to the Montreux Convention setting out international rules for using the straits, Turkey can only make the move if the two countries are formally at war.

Even if Russia downs a Turkish plane, Ankara can’t close the straits unless it formally declares war on Moscow, according to Giray Sadik of Ankara’s Yildirim Beyazit University.

Turkish Prime Minister Ahmet Davutoglu sought to ease tensions Wednesday, calling Russia Turkey’s “friend and neighbor” and insisting relations cannot be “sacrificed to accidents of communication.” He told his party’s lawmakers that Turkey didn’t know the nationality of the plane brought down Tuesday until Moscow announced it was Russian.

Before Tuesday’s incident, Russia and the West appeared to be inching toward joining efforts to fight the Islamic State group (ISIS) following the horrific Nov. 13 attacks in Paris and the Oct. 31 bombing of a Russian airliner over Egypt’s Sinai desert. ISIS claimed responsibility for both attacks.

The downing of the plane came as French President Francois Hollande was visiting Washington prior to a trip to Moscow set for Thursday in a bid to narrow the rift between the West and Russia and agree on a joint action against ISIS.

“On NATO’s side, I think there is a strong desire not to jeopardize the diplomatic mission of President Hollande,” said Bruno Lete, a senior analyst at the German Marshall Fund in Brussels.

Russian Foreign Affairs Minister Sergei Lavrov said that Russia remains committed to efforts to try to negotiate a Syria peace deal, but emphasized the need to take action against the group’s sponsors. He accused Turkey of helping ISIS by buying oil from the group, and said that terrorists used the Turkish territory to prepare terror attacks against other countries, which he didn’t name.