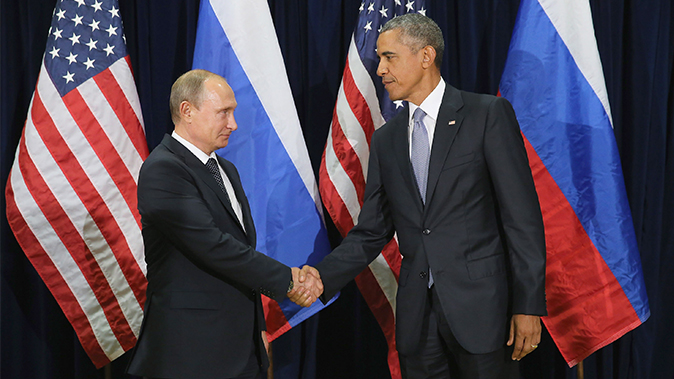 Putin: Russia, US Have Narrowed Their Differences on Syria

MOSCOW—President Vladimir Putin was both cordial and coarse in his year-end news conference Thursday, saying the U.S. and Russia have narrowed their differences on Syria and share the same view of how to settle the conflict.

He reserved his crudest language for Turkey, suggesting that some leaders of the NATO ally may have wanted to “lick the Americans in some of their private parts” by shooting down a Russian warplane on the Syrian border. That miscalculation by Turkey was now hurting its own interests, Putin said at his marathon meeting with Russian and foreign journalists.

The Russian leader even gave a shoutout to Donald Trump, calling the Republican presidential candidate a “very bright and talented man.”

Speaking with emphasis and gesturing energetically throughout a news conference that lasted more than three hours and was televised live, Putin also vowed that the killing of a Russian opposition leader gunned down near the Kremlin in February will be solved and no one will be immune from prosecution.

Putin said the Russian air campaign in Syria, which began Sept. 30, will continue until a political process begins, adding that Moscow would back the latest U.S. proposals for a peace process in the civil war.

Commenting on relations with Washington, Putin said that Russia backs a U.S.-drafted U.N. Security Council resolution on settling the crisis. The plan was presented by U.S. Secretary of State John Kerry during his visit to Moscow earlier this week.

“In general, it suits us,” Putin said. “I believe that the Syrian authorities should be OK with it, too.”

He added that while the Syrian government “may not like some of it … concessions must be made by both sides” to end the conflict that has killed more than 250,000 and turned millions into refugees since 2011.

The Russian plan for settling the conflict “strangely as it may seem, coincides with the U.S. vision in its key aspects: joint work on a constitution, creation of instruments of control over future early elections, holding the vote and recognizing its results on the basis of that political process,” Putin said.

“We will help settle this crisis in every possible way, and we will try to find solutions acceptable for all parties,” he said. At the same time, he reaffirmed Russia’s stance on the key issue dividing Russia and the West, the fate of Syrian President Bashar Assad, saying the Syrians themselves must determine who rules them.

Putin said he was unsure whether to keep a permanent base in Syria, because Russia’s new sea- and air-launched cruise missiles used recently in the country have given Moscow enough punch to strike from afar.

Addressing strained relations with Turkey, Putin said he “it’s practically impossible” to overcome tensions with Ankara under its current leaders after it shot down a Russian bomber.

Turkey said the aircraft violated its airspace for 17 seconds despite repeated warnings, while Moscow insisted the plane had stayed in Syrian airspace.

Putin said that Russia was particularly annoyed because instead of apologizing over what he called Turkey’s “hostile” action that killed one of the plane’s two pilots and a Russian marine, the country turned to NATO for help.

The Russian leader said he had previously agreed to accommodate Turkey’s concerns regarding Syria, adding that the Turkish leadership had never asked Russia to refrain from striking that specific area.

“Couldn’t they just make a call or warn the military via the communications channels that existed and say: ‘Look … there are our interests here, so please don’t hit it’?” Putin said.

“Did they think that we will run away? Russia isn’t that kind of a country,” he said. “We only have increased our presence there.”

Russia has sent more warplanes to a base in Syria and deployed long-range S-400 air defense missile systems there, he added, putting an end to what he called regular incursions by Turkish jets in Syrian airspace.

“Turkey had constantly violated Syria’s airspace, but let them try to fly over there now,” he added, menacingly.

Russia has introduced economic sanctions against Turkey, including a ban on the sale of tour packages that is estimated to cost the Turkish tourist industry billions of dollars a year.

“Someone in the Turkish leadership may have decided to lick the Americans in some of their private parts” in the hope that Washington would turn a blind eye to Turkey’s deployment of additional troops to Iraq if they down a Russian plane, Putin said. “I don’t know if the Americans wanted it or not,” he added.

But the Russian leader also said that Kerry’s visit to Moscow has shown that “the American side is ready to move toward joint settlement of the issues that can only be settled together.”

“We are ready and we want to develop our ties with the United States,” he said. “We are open, and we will work with any president the American people will vote for.”

As he was leaving the hall, Putin was asked about Trump. He called the GOP contender the “absolute leader” in the race, and a “bright and talented man.”

On other issues, Putin said Russia was working with Egypt to restore air links severed following the Oct. 31 crash of a Russian passenger in the Sinai desert that killed all 224 people aboard. Moscow has said that the crash was caused by a bomb on the plane, and the Islamic State group claimed responsibility.

The suspension of flights to Egypt wasn’t political, Putin said, and only intended to ensure the safety of Russian citizens. He praised Egyptian President Abdel-Fattah el-Sissi for his “remarkable personal courage” in the fight against terrorism and said the flights will resume once Russian and Egyptian officials work out the necessary safety measures, including the presence of Russian experts at Egyptian airports.

Turning to Ukraine, Putin said Russia was interested in seeing that conflict settled as quickly as possible. He urged Ukraine’s government to approve legislation on holding elections in eastern regions, where Russia-backed separatists have been fighting government troops since April 2014. More than 9,000 people have been killed.

While insisting Russia has no regular troops in eastern Ukraine, Putin acknowledged it has some personnel “performing some military tasks” there.

He also said Russia is eager to improve ties with Georgia, which were strained after a 2008 war, and could offer Georgians visa-free travel, an important move for a small ex-Soviet nation that has many citizens living and working in Russia.

Turning to other domestic issues, Putin vowed that the Feb. 27 shooting death of opposition leader Boris Nemtsov will be solved. Nemtsov, a former deputy prime minister, was slain in a brazen attack on a bridge near the walls of the Kremlin.

Investigators have arrested several suspects from the province of Chechnya, including a regional police officer who is suspected of pulling the trigger. But they haven’t yet determined who ordered the slaying.

Solving it is essential for ensuring political stability, Putin said, pledging “no one will cover up anyone.” He also said he hadn’t discussed the case with Ramzan Kadyrov, the leader of Chechnya.

In a rare peek at his personal life, Putin was asked about media reports that a woman who runs a foundation at Moscow State University, Katerina Tikhonova, was one of his two daughters. He responded that he wouldn’t say where his daughters work out of respect for their privacy.

“They never have been star children, they never liked the limelight, they are just living their lives and do it honorably,” Putin said. He added proudly that both speak at least three European languages and one speaks a couple of Asian languages.