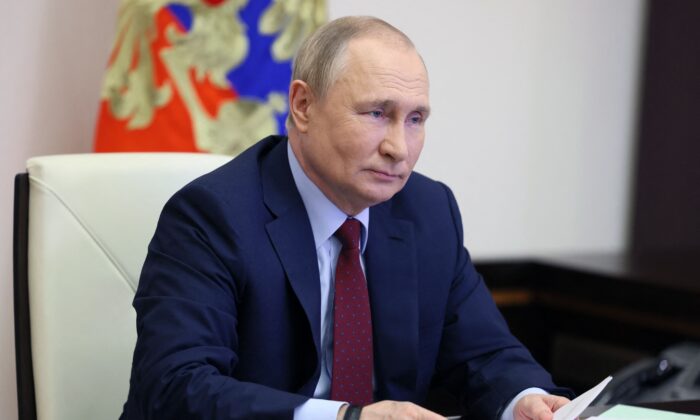 Russian President Vladimir Putin attends a meeting with families awarded Orders of Parental Glory via a video link at the Novo-Ogaryovo state residence, outside Moscow, on June 1, 2022. (Mikhail Metzel/Sputnik/AFP via Getty Images)
Europe

Russian President Vladimir Putin said last week that Moscow has “no problem” if Finland and Sweden join NATO, but he warned that the Kremlin would respond in kind if troops and infrastructure would be deployed in the two Nordic countries.

“In regard to Finland and Sweden, we don’t have problems with Finland and Sweden that, unfortunately, we have with Ukraine,” Putin said during a news conference on June 29 in the Turkmenistan capital of Ashgabat after completing talks with regional leaders in the central Asian ex-Soviet state.

“Please go ahead,” the Russian president said in reference to the two countries seeking to become NATO members, adding that Moscow doesn’t “have territorial differences.”

However, Putin noted that Helsinki and Stockholm should clearly understand that they didn’t face any threats prior to joining the military alliance. He warned last week that Moscow will respond to any kind of action that makes Russia feels threatened.

“If NATO troops and infrastructure are deployed, we will be compelled to respond in kind and create the same threats for the territories from which threats towards us are created,” the Russian president said.

“Everything was going fine between us, but now there will be tensions, there certainly will,” he added. “This is obvious and inevitable, I repeat, if there is a threat to us.”

Putin made his comment a day after NATO member Turkey lifted its veto over the bid by Finland and Sweden to join the alliance after the three nations agreed to protect each other’s security.

The move means Helsinki and Stockholm can proceed with their application to join NATO, marking the biggest shift in European security in decades.

On July 5, NATO ambassadors signed an accession protocol for Finland and Sweden that will allow them to join the nuclear-armed alliance once parliaments ratify the decision, its most significant expansion since the 1990s.

NATO Secretary-General Jens Stoltenberg said it was a historic day “for Finland, for Sweden, for NATO, and for Euro-Atlantic security.”

The protocol means Helsinki and Stockholm can participate in NATO meetings and have greater access to intelligence but will not be protected by the NATO defense clause—that an attack on one ally is an attack against all—until ratification. That is likely to take up to a year.

The move for Helsinki and Stockholm to become members of the alliance was accelerated following Russia’s attack on Ukraine, prompting Russian neighbors to appeal for NATO’s additional security guarantees.

Finland, which has a population of 5.5 million, shares the EU’s longest border with Russia, an 833-mile frontier. The two Nordic countries were traditionally military nonaligned, but the ongoing war in Ukraine has triggered a surge in support for joining NATO.

Russia, for its part, has previously warned the countries against joining NATO, with Kremlin officials saying it wouldn’t contribute to stability in Europe. Moscow said in the past it would respond to such a move with retaliatory measures that would cause “military and political consequences” for Helsinki and Stockholm.