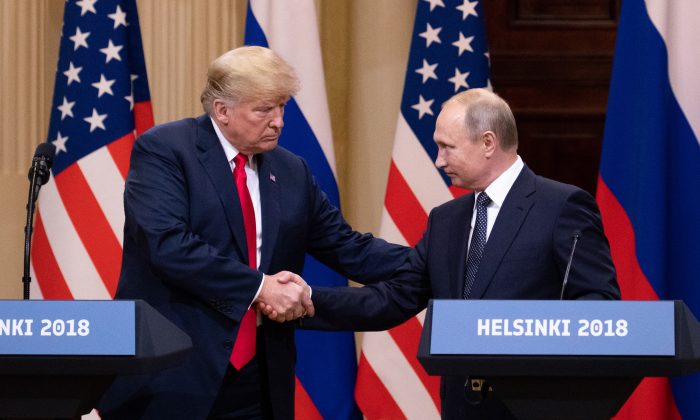 “Regarding our meetings, I understand very well what President Trump said. He has a desire to have further meetings,” Putin said in South Africa while attending a summit of five major emerging national economies, or BRICS nations (Brazil, Russia, India, China and South Africa.)

“I am ready for that. We need for the appropriate conditions to exist, to be created, including in our countries,” Putin told the news conference on Friday. “We are ready for such meetings. We are ready to invite President Trump to Moscow. Be my guest. He has such an invitation, I told him that.”

Referring to the proposal for a meeting in the United States, Putin said: “I am ready to go to Washington. I repeat once again, if the right conditions for work are created.”

White House spokesperson Sarah Sanders said on Friday morning that “President Trump looks forward to having President Putin to Washington after the first of the year.”

“He is open to visiting Moscow upon receiving a formal invitation,” she added.

He said that, in the meantime, it’s possible that he and Trump would meet during the G20 summit in Argentina in November.

Putin said that in their recent meeting, they discussed topics that “concern very many countries around the world and, including, all of Europe,” NBC reported.

The Russian leader said that it would be good if the two nuclear powers have better ties and are talking to one another.

“In Helsinki, we talked about the issues in which our states have a real stake. In 2021, the New START treaty expires,” he said, referring to a nuclear arms control treaty. “Are we going to extend it or not? Russia and the United States have a stake in that, the whole world has a stake in that, in not starting an arms race. If we don’t start talks in 2021, the treaty will cease to exist.”

The New START treaty is a nuclear arms reduction treaty between the United States and Russia that was signed in April 2010.

“Yes, we have contacts on a working level, but sometimes that’s not enough, we need contacts at the highest political level,” Putin said.

On July 16, Nezavisimaya Gazeta, a Russian daily paper, ran an article titled, “The U.S. Offers to Unite with Russia Against Iran and China,” concluding from hints at the Helsinki summit that Trump plans to enlist Russia to help counter China’s threats in trade and geopolitics.

After the meeting, Russian media highlighted three social problems in China: the behavior of Chinese tourists, the illicit drug trade, and corruption in China’s railway system. The criticism was by no means an accident, according to Li Hengqing, an independent analyst at an NGO in Maryland, in an interview with the The Epoch Times’ Chinese-language edition.

“The friendship between Putin and the Chinese regime is based on personal gain,” Li said. “So when Putin saw an opportunity to improve its relationship with the U.S., Europe, or NATO countries, he would naturally abandon his vested interests with China.”

After the meeting last week in Helsinki, the Trump administration invited Putin to Washington.

In Helsinki, @POTUS agreed to ongoing working level dialogue between the two security council staffs. President Trump asked @Ambjohnbolton to invite President Putin to Washington in the fall and those discussions are already underway.

But the president’s national security adviser, John Bolton, said that a Washington-based meeting between Trump and Putin wouldn’t happen until 2019 due to special counsel Robert Mueller’s “witch hunt.”

“The president believes that the next bilateral meeting with President Putin should take place after the Russia witch hunt is over, so we’ve agreed that it will be after the first of the year,” he said in a statement to Fox News.