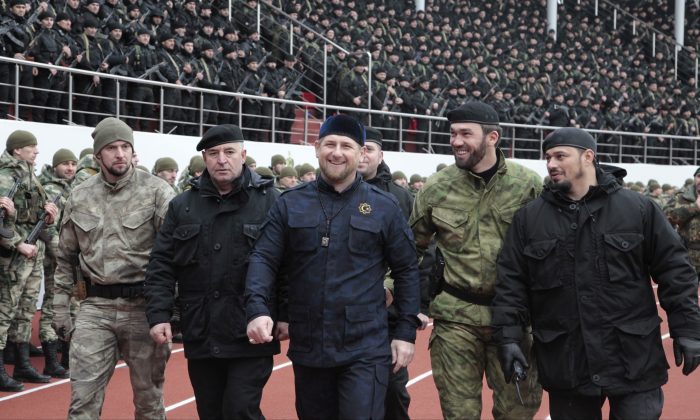 In this file photo taken on Sunday, Dec. 28, 2014, Chechnya's regional leader Ramzan Kadyrov, center, and other Chechen top commanders inspect Chechen special forces during a a rally at the Dinamo stadium in Chechen capital Grozny, Russia. Russian President Vladimir Putin bestowed a state award Monday on the leader of Chechnya, the North Caucasus strongman who hailed the suspected killer of an opposition politician as a "true patriot."Kadyrov drew criticism Sunday from government opponents after praising Zaur Dadayev, a Chechen suspect in the murder of Kremlin foe Boris Nemtsov. (AP Photo/Musa Sadulayev, file)
Europe

MOSCOW—Chechnya’s strongman on Tuesday reaffirmed an unwavering loyalty to President Vladimir Putin after receiving a medal seen by some as a move to assuage the feisty Chechen leader after one of his officers was arrested as a suspect in the slaying of a Russian opposition figure.

Ramzan Kadyrov thanked Putin for awarding him the Order of Honor, one of Russia’s highest decorations, saying that it would be “the lightest task” for him to sacrifice his life for the Russian leader. “We are infantrymen of the president of Russia!” he added.

Some observers say the arrest of five suspects accused of involvement in the Feb. 27 slaying of Putin’s prominent critic, Boris Nemtsov, could strain Kremlin’s relations with Kadyrov, who has run Chechnya like his own fiefdom while relying on federal subsidies.

One of the suspects, Zaur Dadaev, was a senior officer in Chechnya’s police force. A judge said during Saturday’s hearing that he confessed to the crime, but Dadaev said in comments carried by the daily Moskovsky Komsomolets Tuesday that he was not guilty. The newspaper quoted him as telling rights activists who visited him in prison that he hadn’t been given a chance to plead innocent.

Following his arrest, Kadyrov praised Dadaev as a brave soldier and a deeply religious man. The Chechen leader also hailed another suspect, who blew himself up with a grenade when police came to arrest him at his apartment in Chechnya’s regional capital, Grozny.

Kadyrov’s comments reflected a degree of defiance following the arrests, a rare occasion when federal law-enforcement agencies dared to prosecute those loyal to the Chechen strongman.

Oleg Orlov, the head of Memorial, a respected Russian human rights group, said the arrests and the subsequent award were a message to Kadyrov.

“They show Kadyrov that he’s not quite his own boss, and some members of his entourage will be punished,” Orlov told The Associated Press. “It’s a signal: we will clean the field around you so that you know your place, but you are personally not in trouble yet.”

Alexei Malashenko, a Caucasus expert with the Carnegie Endowment’s Moscow office, said that by awarding Kadyrov with a medal Putin assured him of his personal trust despite strong anti-Kadyrov sentiments in the Russian law-enforcement agencies.

“Some people in security services of the Russian Federation don’t like Ramzan Kadyrov because it’s permitted to him to do everything he wants,” Malashenko said.

But Putin, Malashenko added, apparently “understands that at the moment it’s necessary to use Islam as a political instrument for Ramzan Kadyrov.”

“They are like Siamese twins: Kadyrov will certainly not survive without Putin, and it would be difficult for Putin to do without Kadyrov,” Malashenko told the AP.

Kadyrov has used generous Kremlin funding to rebuild Chechnya after two separatist wars and has relied on his feared security force of former rebels like himself to stabilize the North Caucasus province. International human rights groups have accused Kadyrov of rampant abuses, including arbitrary arrest, torture and extrajudicial killings.

The Kremlin has counted on Kadyrov to pacify Chechnya, turning a blind eye to his campaign to enforce Islamic rules, including mandatory headscarves for women. In the wake of the attack on Charlie Hebdo in Paris, which published cartoons of the Prophet Muhammad, Kadyrov called those who defended the French satirical magazine his “personal enemies.” He also staged a massive rally in Grozny to press the point.

Russia’s top investigative agency has said that Nemtsov’s criticism of the Charlie Hebdo attackers could have been a motive behind his killing. Echoing the claim, Kadyrov said on his Instagram account Saturday that Dadaev was shocked by the magazine’s cartoons and commentaries in their support.

Malashenko said he didn’t believe that Nemtsov was targeted for his comments related to Charlie Hebdo because he was far less outspoken than others.

His view was shared by many other observers, who have remained skeptical about the official version, saying that while Nemtsov criticized the Charlie Hebdo attackers, he made no comments against Islam. Many continued to insist that his killing just outside the Kremlin was likely rooted in his criticism of Putin.