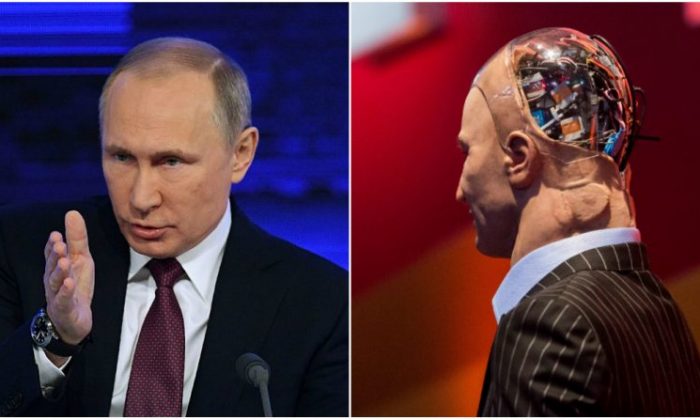 Putin Reveals Fears That Artificial Intelligence Will ‘Eat Us’

Russia’s president revealed his fears over artificial intelligence when he asked Russia’s largest technology firm a question—how long will it be until AI technology will “eat us.”

President Vladimir Putin was reportedly speaking to Arkady Volozh, the chief of internet firm Yandex during a tour of the company’s headquarters in Moscow, the DailyMail reported.

At the time of the question, Volozh was discussing the potential of AI. According to state-funded Russian media RT, Volozh reportedly seemed baffled over the president’s question.

He replied simply with, “I hope never.”

Then after a pause, Volozh explained that other machines are “better than humans” in certain areas. He gave the example of an excavator performing better at digging than a person digging with a shovel.

He added, “But we don’t get eaten by excavators.”

The answer did not impress Putin. He interjected saying, “They don’t think.”

Elon Musk, the founder of Tesla, has repeatedly warned about the dangers of artificial intelligence. However, Facebook founder Mark Zuckerberg seemed to disagree with Musk’s warnings, comparing it to fear mongering.

“With AI especially, I’m really optimistic,” Zuckerberg said during a Facebook Live broadcast. “I think that people who are naysayers and kind of try to drum up these doomsday scenarios — I just, I don’t understand it. I think it’s really negative and in some ways I actually think it is pretty irresponsible.”

In July Musk hit back on Twitter saying, “I’ve talked to Mark about this. His understanding of the subject is limited.”

I've talked to Mark about this. His understanding of the subject is limited.

Back in early September, Putin said that whoever reaches a breakthrough in developing artificial intelligence will come to dominate the world.

Putin, speaking on Friday, Sept.1, at a meeting with students, said the development of AI raises “colossal opportunities and threats that are difficult to predict now.”

He warned, “The one who becomes the leader in this sphere will be the ruler of the world.”

“It would be strongly undesirable if someone wins a monopolist position,” and promised that Russia would be ready to share its know-how in artificial intelligence with other nations.

The Russian leader predicted that future wars will be fought by drones, and “when one party’s drones are destroyed by drones of another, it will have no other choice but to surrender.”

Putin’s remarks confirmed the fears of AI experts around the world who sent a letter to the United Nations last month warning that time is running out to avert a robotic warfare disaster.

“We do not have long to act,” the experts wrote, with unprecedented bluntness and alarm. “Once this Pandora’s box is opened, it will be hard to close.”

The world’s superpowers are all racing to develop AI weapons systems, according to a Human Rights Watch report titled Banning Killer Robots in 2017. The United States, China, Russia, Britain, Israel, and South Korea are all vying to top each other in what the letter states may “become the third revolution in warfare.”