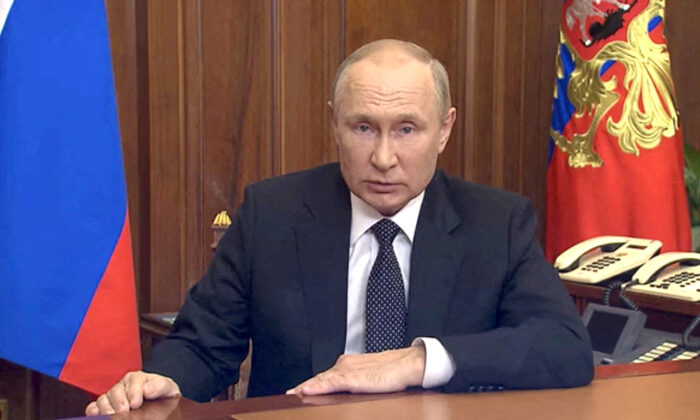 Russian President Vladimir Putin makes an address on the conflict with Ukraine, in Moscow on Sept. 21, 2022, in this still image from video. (Russian Presidential Press Service/Kremlin via Reuters)
Russia-Ukraine War

Putin Mobilizes More Troops, Hints at Nuclear Weapon Use in Conflict Over Ukraine

Russian President Vladimir Putin on Sept. 21 accused Western powers of engaging in nuclear blackmail and put his country onto an enhanced wartime footing, ordering a partial military mobilization and vowing to use “all means available” in the event of a threat against Russia and its people.

Putin made the remarks in a televised address, in which he said that some high-ranking representatives of Western powers had expressed “the possibility of using nuclear weapons of mass destruction against Russia,” according to a translation of his remarks by The Scotsman.

“Those that allow such statements shall be reminded that our country also has various weapons of mass destruction,” including some that are more advanced than those in NATO’s arsenal, he added, according to a translation of his remarks by Sky News.

“If there is a threat to the territorial integrity of our country and for protecting our people, we will certainly use all means available to us,” Putin continued, adding, “I’m not bluffing.”

Accusations Against the West

Putin accused the West of seeking to “weaken, divide and ultimately destroy” Russia, according to an official Kremlin translation of part of his speech, which was posted on the Kremlin website.

Claiming that Western powers had concocted these plans long ago, Putin said they fomented anti-Russia terrorist activity in the Caucasus, moved “NATO’s offensive infrastructure” near his country’s borders, nurtured “hatred for Russia for decades,” and intended to set up Ukraine as an “anti-Russia bridgehead.”

Putin on Sept. 21 signed an executive order calling for a partial military mobilization of Russian citizens, which comes as a Ukrainian counteroffensive has dealt Russian troops a series of defeats.

Russia’s Defense Minister Sergei Shoigu told Russian state television that Putin’s mobilization order would encompass reservists but wouldn’t include students or anyone without prior military service.

The Russian leadership has been reluctant to order a broad military mobilization, portraying the invasion of Ukraine as a “special military operation” that’s limited in scope.

Putin’s order marks the first time since World War Two that a military mobilization of Russian citizens has been invoked.

His declaration came after the announcement of referendums that would pave the way for formal annexation by Russia of parts of Ukraine.

Bridget Brink, U.S. Ambassador to Ukraine, took to Twitter to describe Putin’s order as a sign of “weakness” and “failure.”

“Sham referenda and mobilization are signs of weakness, of Russian failure,” Brink said in her statement. “The United States will never recognize Russia’s claim to purportedly annexed Ukrainian territory.”

Britain’s Defense Secretary Ben Wallace was cited by The Scotsman as saying that Putin’s order amounts to an admission of failure.

“Putin’s breaking of his own promises not to mobilize parts of his population and the illegal annexation of parts of Ukraine, are an admission that his invasion is failing,” Wallace said.

“No amount of threats and propaganda can hide the fact that Ukraine is winning the war, the international community are united, and Russia is becoming a pariah,” he added.