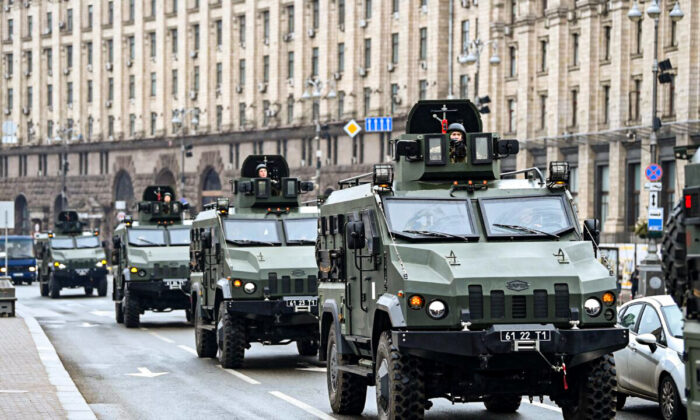 Russia’s invasion of Ukraine has been a “rude awakening” for political leaders who thought the global rules-based order could be maintained through treaties and not armed force, according to a defence expert from the Australian Strategic Policy Institute.

“The big thing that a whole lot of Western leaders and societies are having demonstrated to them is that we’re not living in some ‘post-force’ world where wars just can’t happen,” Defence Director Michael Shoebridge told The Epoch Times.

“Armed force is a present and used tool of states, particularly of the two powerful authoritarian outfits led by Vladimir Putin and Xi Jinping,” he said. “Armed force in their eyes is not some anachronism from history. It’s an active tool to be used to pursue their goals.”

Shoebridge called it a “crystallising moment” for the democratic world, which should galvanise greater global action.

“The sanctions response is the first tangible indicator of a much larger collective response against this aggression. While it’s not sufficient to deter Putin, the unity of action is something that will carry on into the bigger responses beyond this immediate crisis,” he said.

“This is now not a political hypothetical. This is now a manifest reality that they need to rebuild European military power, and they need to do it faster at a greater scale.”

On Feb. 24, Russian President Vladimir Putin announced a “special military operation” in response to the alleged threat of ‘nazism’ from the Ukrainian government before sending troops into the former Soviet country.

For months, European, U.S., and NATO leaders have appealed for Putin to back down, yet Moscow still launched a multi-pronged attack via land, sea, and air into Ukraine from the east, south, and north.

Ukrainian President Volodymyr Zelensky reported 137 casualties on early Feb. 25, while issuing a decree ordering the mobilisation of the population to defend the country. As a result, Ukrainian males aged 18–60 are prohibited from leaving, according to an announcement from the State Border Guard Service.

Meanwhile, Shoebridge said the invasion highlights the increasing division between Russia, China, and the rest of the world.

He noted however that it was harder for authoritarian regimes to “form deep, close partnerships.”

“But in a larger sense it complicates China’s strategy in the Indo-Pacific,” he added. “This is joining European and Indo-Pacific security into one strategic system, where nations (in both regions) face a common challenge from the joint partnership of Russia and China.”

“In a way, it brings more power to bear on Russia and China through the combination of European and Indo-Pacific powers … And that’s a net advantage for the powerful democratic world.”

Since the invasion began, multiple nations have imposed several tranches of sanctions against Russian banks, politicians, individual oligarchs and their families, and the company behind Nord Stream 2—the major pipeline set to provide gas from Russia to Germany.

Putin was not named in any sanctions in what could be an attempt to create internal pressure on the Russian leader.