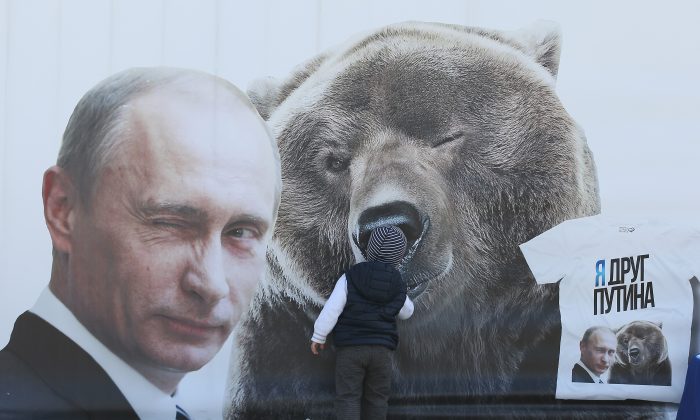 A boy inspects a billboard showing a winking Russian President Vladimir Putin and a bear at Victory Park on May 8, 2015 in Moscow, Russia. Chinese leader Xi is heading to Russia for events celebrating the 70th anniversary of the victory over Nazi Germany and the end of World War II. (Sean Gallup/Getty Images)
China

The Chinese regime is turning on the charm offensive as its Party head Xi Jinping readies to meet with Russian President Vladimir Putin in Moscow. The two will attend a military parade for the 70th anniversary of the end of World War II.

Just ahead of Xi’s visit, a film studio that appears to focus exclusively on videos promoting Chinese leaders, has produced a video praising Putin.

“He has massive muscles,” says a young man in the video.

“Putin is a big brother as handsome as Xi Jinping,” says a young woman.

Around four minutes of the five-minute video feature brief clips of Chinese people talking about their impressions of Russia and Putin.

Some statements are not-so-subtle attempts to butter up their Russian neighbors, from a young man praising Russia’s plentiful “beautiful women,” to a man praising its “bread and vodka,” to a kindergartener noting “It’s even bigger than China.”

There are also a few statements that come off as political hints.

“The ancient Chinese people have always held good intentions toward their neighbors,” an older man says. “Please believe this.”

A smiling young woman says, “I think Russians are good. I will think they are better if you treat China better.”

The video is made by “Studio on Fuxing Road,” which is best known for political cartoons praising Chinese leaders. It was posted on the YouTube channel of the Chinese regime’s official mouthpiece, Xinhua.

It also features a few songs. Young women sing a Russian pop song from the 2000s in admiration of Putin. A chorus also sings two Soviet-era songs, including 1938 battle song “Katyusha” and another about relations between the Soviets and Chinese.

It ends with a video of Xi and Putin shaking hands.

From a propaganda perspective, the video takes advantage of the macho image Putin has been trying to create. The Chinese regime may be trying to further reel in Russia as an ally by pumping up an image that Russians desire, and by feeding Russian pride at a time when Russia is being heavily criticized in the press and by leaders in the United States and Europe.