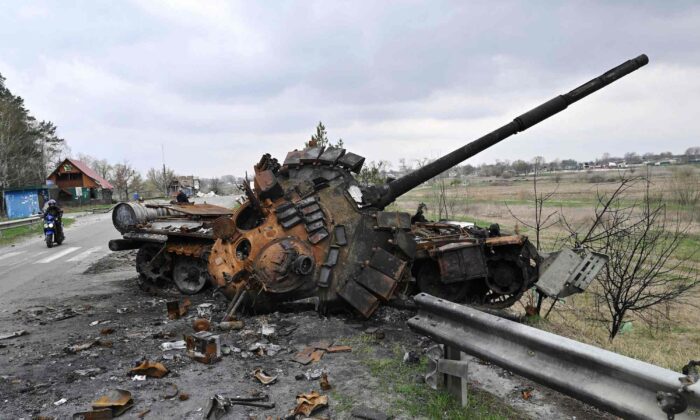 A man rides a motorbike past a destroyed Russian tank on a road in the village of Rusaniv, near Kyiv, Ukraine, on April 16, 2022. (Genya Savilov/AFP/Getty Images)
Russia-Ukraine War

Russian President Vladimir Putin has fired military commanders who have “performed poorly” during his country’s conflict with Ukraine, according to the UK Ministry of Defense in a May 19 update.

“In recent weeks, Russia has fired senior commanders who are considered to have performed poorly during the opening stages of its invasion of Ukraine,” the Defense Ministry wrote on Twitter. “A culture of cover-ups and scape-goating is probably prevalent within the Russian military and security system.”

Russia hasn’t issued a public comment on the allegation. It’s not clear where the ministry obtained its information.

Two generals were named by the ministry, although in its post it suggested that others may have been relieved in recent days as well. Lt. Gen. Serhiy Kisel, who commanded Russia’s 1st Guards Tank Army, was fired for not being able to capture Kharkiv, a city in eastern Ukraine located near the Russian border. Vice Adm. Igor Osipov was possibly fired after Russia’s Moskva ship sunk in the Black Sea last month, according to the UK.

Russian officials disputed claims that Ukrainian forces had sunk the ship, and they instead blamed it on an ammunition explosion and fire.

The UK Defense Ministry also speculated that Russian chief of general staff Valery Gerasimov still “likely remains in post,” but it’s not clear whether Putin has confidence in him.

“Many officials involved in the invasion of Ukraine will likely be increasingly distracted by efforts to avoid personal culpability for Russia’s operational set-backs,” the ministry wrote. “This will likely place further strain on Russia’s centralized model of command and control, as officers increasingly seek to defer key decisions to their superiors. It will be difficult for Russia to regain the initiative under these conditions.”

Several weeks ago, after about a month of trying to encircle Kyiv, Ukraine’s capital, Russian forces were pulled back to the eastern and southern parts of the country. Heavy fighting has raged around Mariupol and the Azovstal steel plant, sparking the surrender of hundreds of fighters in recent days.

Russia’s Ministry of Defense said on May 19 that 1,730 militants, including fighters with the Azov battalion, had surrendered over the previous 24 hours.

“Over the past 24 hours, 771 militants of the nationalist Azov battalion blocked at the Azovstal plant in Mariupol have surrendered. In total, 1,730 militants have surrendered since May 16, including 80 injured,” ministry spokesman Maj. Gen. Igor Konashenkov said on May 19, according to state-run media.

The International Committee of the Red Cross told Reuters that it has now started registering hundreds of prisoners of war from the Mariupol steel plant. The operation to track fighters leaving the plant, including the wounded, started on May 17 and was continuing on May 19.