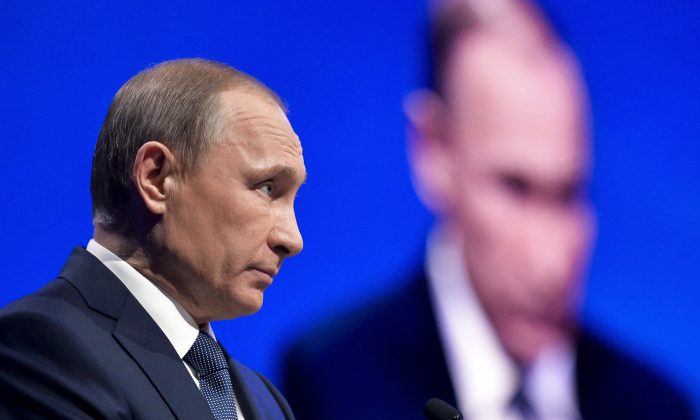 Russian President Vladimir Putin at a regional meeting of the pro-Kremlin United Peoples' Front in Stavropol, on Jan. 25, 2016. Putin has criticized Soviet founder Vladimir Lenin for placing a “time bomb” under the state and denounced brutal repressions by the Bolshevik government. (Alexei Druzhinin/Sputnik via AP)
Europe

MOSCOW—Russian President Vladimir Putin on Monday criticized Soviet founder Vladimir Lenin, accusing him of placing a “time bomb” under the state, and sharply denouncing brutal repressions by the Bolshevik government.

The harsh criticism of Lenin, who is still revered by communists and many others in Russia, is unusual for Putin, who in the past carefully weighed his comments about the nation’s history to avoid alienating some voters.

At the same time, he signaled that the government has no intention of taking Lenin’s body out of his Red Square tomb, warning against “any steps that would divide the society.”

Putin’s assessment of Lenin’s role in Russian history during Monday’s meeting with pro-Kremlin activists in the southern city of Stavropol was markedly more negative than in the past.

Putin denounced Lenin and his government for brutally executing Russia’s last czar along with all his family and servants, killing thousands of priests and placing a “time bomb” under the Russian state by drawing administrative borders along ethnic lines.

As an example of Lenin’s destructive legacy, Putin pointed at Donbass, the industrial region in eastern Ukraine where a pro-Russia separatist rebellion flared up weeks after Russia’s March 2014 annexation of Ukraine’s Crimean Peninsula. More than 9,000 people have been killed in the conflict since April 2014, and clashes have continued despite a February 2015 peace deal.

He said that Lenin and his government whimsically drew borders between parts of the U.S.S.R., placing Donbass under the Ukrainian jurisdiction in order to “increase the percentage of proletariat” in a move Putin called “delirious.”

Putin’s criticism of Lenin could be part of his attempts to justify Moscow’s policy in the Ukrainian crisis, but it also may reflect the Kremlin’s concern about possible separatist sentiments in some Russian provinces.

Putin was particularly critical of Lenin’s concept of a federative state with its entities having the right to secede, saying it heavily contributed to the 1991 breakup of the Soviet Union. “It was a time bomb under our state,” he said, adding that Lenin’s was wrong in a dispute with Josef Stalin who advocated a unitary state model.

In the past, Putin has denounced Stalin for massive purges that killed millions, but noted his role in defeating the Nazis in WW II.

In Monday’s comments, Putin also blasted the Bolsheviks for making Russia lose World War I in their quest for power, making Russia suffer defeat by Germany and cede large chunks of territory just months before it lost World War I. “We lost to the losing party, a unique case in history,” Putin said.

Putin said he sincerely believed in Communist ideology when he served in the KGB, adding that while promises of a fair and just society in the Communist ideology “resembled the Bible quite a lot” but the reality was different. “Our country didn’t look like the City of the Sun,” envisaged by socialist utopians, he said.