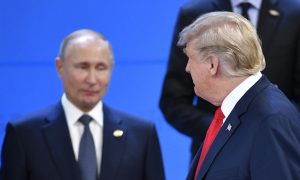 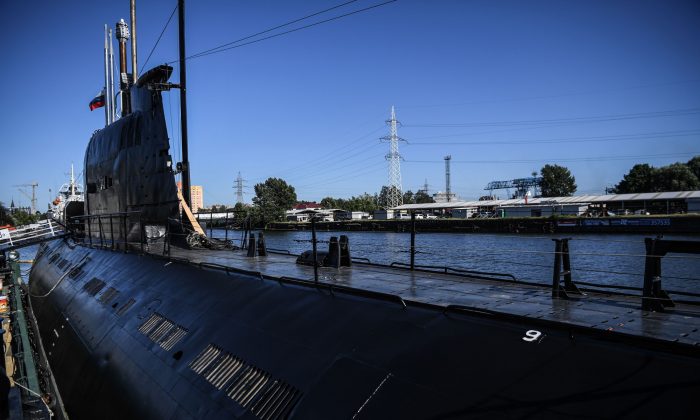 A retired B-413 Soviet submarine docked next to the naval museum in Kaliningrad, Russia on June 20, 2018. (Ozan Kose/AFP/File Photo via Getty Images)
World

Russian President Vladimir Putin disclosed on July 4 for the first time that a secret military submarine hit by a fatal fire three days ago was nuclear-powered, prompting the defense minister to assure him its reactor had been safely contained.

Putin revealed that the submarine had been nuclear-powered by asking Defence Minister Sergei Shoigu during a Kremlin meeting about the reactor’s condition after the fire.

“The nuclear reactor on the vessel is completely isolated,” Shoigu told Putin, according to a Kremlin transcript. “All the necessary measures were taken by the crew to protect the reactor, which is in complete working order.”

The Defense Ministry said the 14 seamen were killed by toxic fumes from Monday’s blaze, the navy’s worst accident in more than a decade. It said some others survived the blaze, but there was no information on how many crew members have been rescued. The ministry didn’t name the vessel, and the Kremlin refused to divulge any details about it, saying the information is highly classified. Russian media reported that it was the country’s most secret submersible, a nuclear-powered research submarine called the Losharik intended for sensitive missions at great depths.

Replying to questions from President Vladimir Putin about the nuclear reactor’s condition, Shoigu said the vessel was designed so that its reactor is fully isolated and autonomous.

“The crew also has taken all the necessary action to safeguard the reactor, and it is fully operational,” he said. “That gives us hope that the vessel could be repaired quickly.”

Shoigu, who traveled to the navy’s main Arctic base of Severomorsk Wednesday to oversee a probe into the fire, said the blaze erupted at the vessel’s battery compartment and spread further.

He praised crew members for “heroic” actions, saying those who died sacrificed their lives to rescue a civilian expert and to save the ship.

Hundreds of sailors gathered Thursday at Russia’s main naval cathedral in Kronshtadt just off St. Petersburg in the Gulf of Finland to mourn the dead.

The business daily Kommersant reported that most of the seamen were resting and a team of five was on duty when the fire erupted. It said the men were apparently poisoned by toxic fumes from the fire that spread through the ship’s ventilation system.

The fire has crippled a vessel that observers have described as a unique asset with unmatched capability.

The Losharik is named after a Soviet-era animated cartoon horse made up of small spheres—a reference to the unique design of its interior hull, reportedly made of interconnected titanium spheres capable of withstanding enormous pressure at great depths.

Media reports speculated that it has claws, manipulators and bottom wheels for rolling on the seabed similar to the U.S. deep submergence vessel, the NR-1, which was mothballed in 2008 after nearly 40 years of service.

Some observers speculated the Losharik was even capable of going as deep as 6,000 meters (19,685 feet), but the claims couldn’t be independently confirmed. Analysts suggested that one of its possible missions could be disrupting communication cables on the seabed.

Such sensitive missions required an elite crew made entirely of officers, most of them senior.

The deadly fire is the most serious Russian naval accident since 2008, when 20 crew members died aboard the nuclear-powered Nerpa submarine in the Pacific Fleet after a firefighting system was accidentally initiated.

In Russia’s worst submarine disaster, the Kursk nuclear submarine suffered an explosion and sank during naval maneuvers in the Barents Sea on Aug. 12, 2000, killing all 118 crewmembers.

By Vladimir Isachenkov. Reuters contributed to this report.