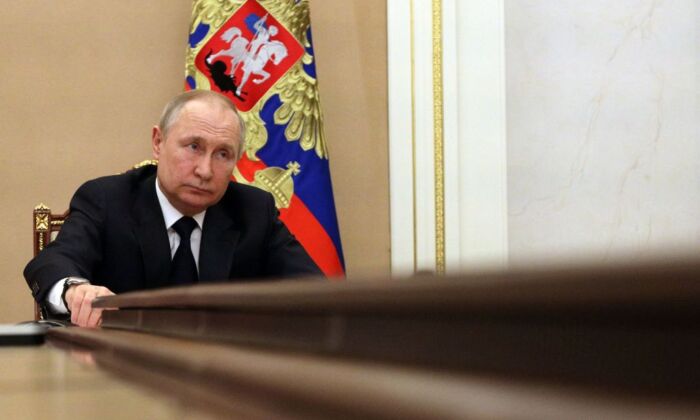 Russian President Vladimir Putin chairs a meeting with members of the Russian government via teleconference in Moscow on March 10, 2022. (SputnikAFP/Getty Images/Mikhail Klimentyev)
Australia

Russian President Vladimir Putin’s ability to absorb economic punishment outstrips that of democratic leaders, who will face pressure from voters from rising living costs in the wake of the invasion of Ukraine, according to the former head of Australia’s Department of Defence.

“That’s not just a reference to what we see in Australia today. The United States will face mid-term elections in November—between now and then they have their driving season and the summer holiday—petrol prices are already starting rise there,” he said.

The former diplomat said that in the longer-term, liberal democracies were stronger, but in the short to mid-term, he expected the bevy of sanctions—over 460 so far aimed at Russian oligarchs and state-owned enterprises—to have little effect.

Fellow speaker at the Press Club, Professor Paul Dibb, former director of the Defence Intelligence Organisation, also could not see the sanctions being effective.

“They will bite now these sanctions, but can the oligarchs actually get their heads together and overthrow him? I could be terribly wrong. I hope I am. (But) I don’t think so,” he said.

Along with sanctions from democratic nations, some of the world’s largest corporations have engaged in major boycotts of the Russian market to bring pressure on Putin.

The Russian leader has responded in part by signing into law on March 14, a new initiative to re-register foreign-owned aircraft for Russian domestic use, according to state-run news outlet TASS.

The new law will aim to ensure the “uninterrupted functioning of activities in the field of civil aviation.”

As Russian troops edge closer to the Ukrainian capital Kyiv, President Volodymyr Zelensky said it was unlikely the country would be joining NATO.

“We have heard for many years about the open doors, but we also heard that we can’t enter those doors,” he said. “This is the truth, and we have simply to accept it as it is.”

In response to the invasion, a 2015 video of U.S. political scientist John Joseph Mearsheimer has circulated online in which he criticises successive U.S. foreign policy experts and presidents for misreading the Ukraine–Russia relationship and oversimplifying the situation by blaming Putin without considering his strategic interests.

“NATO expansion was driven by 21st-century men and women. They believe ‘balance of power’ politics is dead, that’s what happened here. [But] Putin is a 19th-century man. He does view the world in terms of the balance of power politics,” Mearsheimer said, in reference to Russian concerns that a westernised and militarised Ukraine would pose a threat.

“We thought we could drive right up to his doorstep, and it wouldn’t matter. We should create a neutral Ukraine, which is a buffer state between NATO and Russia.”