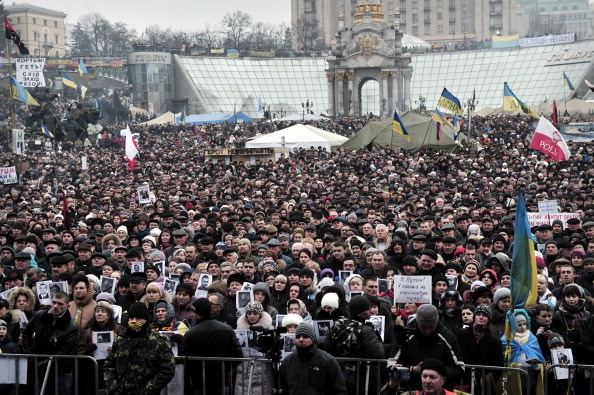 People gather for a rally against Russian intervention in Ukraine on central Kyiv's Independence square on March 2, 2014. Ukraine said on March 2 that it would call up all military reservists after President Vladimir Putin's threat to invade Russia's neighbour drew a blunt response from President Barack Obama. (Louisa Gouliamakai/AFP/Getty Images)
Crisis in Ukraine

Putin Calling All the Shots in Ukraine: What Next for Relations Between Russia and the West?

After days of heightening tensions and increasingly aggressive rhetoric, Russian President Vladimir Putin requested, and was promptly granted, authorization to deploy Russian troops in Ukraine until the situation there had “normalized.” Yet, after further diplomatic efforts, including a 90-minute telephone call between presidents Obama and Putin, there has so far been no actual military escalation, even though the increased presence of Russian troops in Crimea an Ukraine’s announcement to call up military reservists have heightened the potential for serious violence.

With much focus on Crimea in recent days, this is not only a serious escalation in military terms but also geographically as it raises the specter of Russian military forces on the Ukrainian mainland. This would most likely occur in the eastern provinces of the country which have seen demonstrations and clashes between pro-Russian and pro-Ukrainian protesters and security forces in major cities, such as Donetsk, Kharkov, and Dnipropetrovsk.

The Ukrainian government, so far, has resisted being drawn into a military conflict that it could not win. Western capitals, too, have ratcheted up their verbal responses, threatening costs and consequences if Russia persists in pouring more oil onto the fire.

Yet, Western options are limited. There may be some economic sanctions that could be imposed against Russian companies and economic interests outside Russia. Individuals may find themselves on a visa ban list. President Obama and other Western leaders may choose not to attend the upcoming G8 Summit in Sotchi. None of these actions would be without cost for the West, and their impact on Russia, at least in the short term, is questionable. Put differently, the West can irritate Russia, but hardly to such an extent that it would stop doing what it is doing in Ukraine at the moment.

Therefore, a longer-term perspective needs to be adopted, and this raises two questions.

The first question to ask is where Russia might “go” next. It already controls Belarus, has severed Abkhazia and South Ossetia from Georgia, and struck a deal with Armenia that ties this country in the long term to Russia. The Kremlin has a well-established presence in Central Asia, but also needs to tread carefully there to avoid confrontation with China.

One key strategic asset that Moscow still has significant influence over is Transnistria, a break-away region of Moldova to the west of Ukraine. But already in geographic terms, Russia is in a much weaker position there. Even though there are significant and ostensibly pro-Russian forces in Moldova as well, even among communists and Russian-speakers the idea of a European future has gained significant traction. The country’s economic problems, political divisions, and social tensions, though significant, are nowhere near the scale of Ukraine’s, and consistent and constructive EU engagement has created a strong foundation for the country to move decisively into the EU’s orbit and away from Russia–with or without Transnistria.

Beyond Moldova, or more precisely Transnistria, Russia has nowhere else to go in the former Soviet empire that would pose a major threat to Western interests that could not be effectively countered or preempted. And the leverage that Russia can exercise through Transnistria is far more limited than in the case of Crimea.

And Russia has its own vulnerabilities, too. Kaliningrad is an exclave wedged between two NATO member states, Poland and Lithuania. Russia, where exports of oil and gas make up roughly 50 percent of the federal budget, remains highly dependent on access to international, including Western markets. In turn, the country lags behind technologically, so much so that President Putin had to approve the import of weapons technology. As noted earlier, using any of these potential pressure points is not cost-free for the West and unlikely to have immediate effects, but they constitute significant leverage in the longer term, as does the gradual build-up of NATO’s missile defense shield.

The second question relates to the consequences of what may well turn out as another Cold War with Russia. If there is no short-term prospect of cooperation with Russia on other international crises, what does this mean for Western strategic interests in relation to the ongoing civil war in Syria and the increasing danger of the Balkanization of the Levant or the on-going negotiations with Iran on its nuclear program?

Yet Russia, too, has a stake in these crises, and while Russian and Western interests are hardly ever completely aligned, neither side can really afford to let bilateral relations deteriorate to such an extent that international diplomacy and crisis management become completely impossible for a prolonged period of time.

The next days will determine how willing either side is to pay that price.