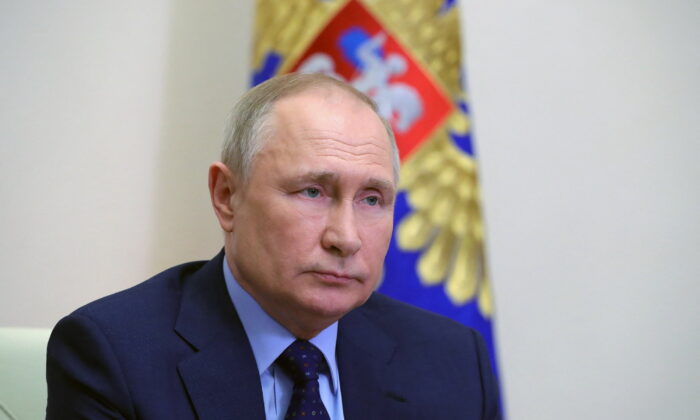 Russian President Vladimir Putin chairs a meeting with members of the Security Council at the Novo-Ogaryovo state residence outside Moscow, Russia, on April 7, 2022. (Sputnik/Mikhail Klimentyev/Kremlin via Reuters)
By Jack Phillips

President Vladimir Putin on Tuesday said that Russia would triumph in its conflict with Ukraine, delivering his first remarks in several days about the weekslong war.

“That Blitzkrieg on which our foes were counting on did not work,” Putin claimed of the West’s crippling sanctions imposed after Putin’s Feb. 24 order to invade the country, according to state-run media outlet TASS. Putin made those comments alongside Belarusian President Alexander Lukashenko, an ally, at Vostochny cosmodrome in the Amur region.

Russia’s economy is on track to contract by more than 10 percent in 2022, the biggest fall in gross domestic product since the years following the 1991 fall of the Soviet Union, former finance minister Alexei Kudrin said on Tuesday, reported Reuters. Russia is facing soaring inflation and capital flight while grappling with a possible debt default following the sanctions.

Putin, who had been ubiquitous on Russian television in the early days of the war, had largely retreated from public view since Russia’s withdrawal from northern Ukraine this month.

The Russian leader, despite setbacks, claimed that the operation in Ukraine is going according to plan, saying that a collision with Ukraine was inevitable due to nationalist factions operating within the country.

“We will not stop military operations in Ukraine until they succeed,” Putin said, adding that Ukraine has “deviated” from agreements that were made during previous rounds of talks, according to state-run RIA Novosti.

The goals of the conflict are “absolutely clear and noble,” Putin also said, state media reported. “There is no doubt that the goals will be achieved.”

“The main goal is to help the people of Donbass [region in eastern Ukraine], whose independence we recognized. We were forced to do so because the Kyiv authorities, pressed by the West, refused to comply with the Minsk agreements aimed at a peaceful solution of the Donbass-related problems,” Putin continued.

Also Tuesday, Ukrainian officials said they are checking reports of possible chemical weapons usage in Mariupol and other areas. They also urged civilians to flee eastern areas ahead of the anticipated offensive, while the battle for the southern port city of Mariupol was reaching a decisive phase, with Ukrainian marines holed up in the Azovstal industrial district.

“There is a theory that these could be phosphorous munitions,” Ukrainian Deputy Defence Minister Hanna Malyar said in public remarks.

It came hours President Volodymyr Zelenskyy said on Monday night that Russia could resort to chemical weapons as it massed troops in Donbass for a new assault. He did not say if they actually had been used. The United States and Britain said they were trying to verify the reports.