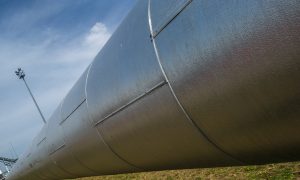 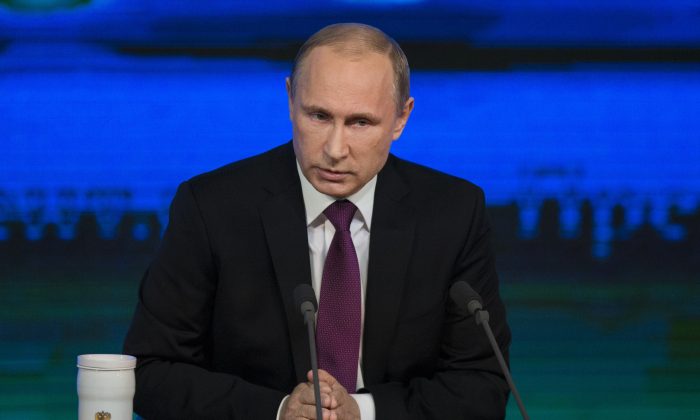 MOSCOW—Sternly warning the West it cannot defang the metaphorical Russian bear, a confident-looking President Vladimir Putin promised Thursday to shore up the plummeting ruble and revive the economy within two years.

While he issued a litany of sharp rebukes against the West, Putin struck a conciliatory note on Ukraine, saying that the rebellious east should remain part of the country, backing a quick exchange of war prisoners and praising his Ukrainian counterpart.

The mixture of blistering anti-Western rhetoric and constructive signals appeared to indicate that Putin is eager to negotiate a face-saving solution to the Ukrainian crisis, but has no intention of conceding defeat in his standoff with the West.

In his first public appearance since the crash of the ruble’s value this week, Putin accepted responsibility for the economic crisis.

He said Western sanctions accounted for at least 25 percent of the ruble’s fall, but the main reason was Russia’s failure to ease its overwhelming dependence on oil and gas exports.

In his speech, the man who has led Russia for 15 years sought to soothe market fears, saying the country has sufficient currency reserves and would not resort to administrative controls, such as fixing exchange rates or obliging exporters to sell non-Russian currency.

Following Putin’s performance, the Russian currency traded between 60 and 62 rubles to the dollar, roughly the same level as late Wednesday, when it rallied 12 percent after plummeting to a historic low of 80 rubles per dollar. The currency has lost about half its value since January.

In Brussels, the EU beefed up its sanctions against Russia with a ban Thursday on investment in Crimea and other economic penalties, including measures aimed at keeping tourists away.

Putin shrugged off speculation that some members of his inner circle hurt by Western sanctions could rebel against him in a “palace coup.” He cited strong public support.

An Associated Press-NORC Center for Public Affairs Research poll released Thursday backed up that view, recording his approval rating among Russians at 81 percent, a level far above typical ratings for world leaders.

The poll was conducted before the ruble’s slump this week, which spurred many Russians to withdraw bank deposits and buy Western currencies or durable goods in an attempt to protect the value of their savings.

Audi was the latest major company to suspend deliveries in Russia amid the ruble’s turmoil. Apple halted online sales earlier this week.

If the Kremlin fails to stabilize the ruble soon, panic could spread, triggering an even more massive run on banks and a sharp surge in inflation that could swiftly erode Putin’s support.

The president argued that the nation’s hard currency reserves are sufficient to keep the economy stable. He said the Central Bank should not “thoughtlessly burn” its $419 billion in reserves.

“Our economy will overcome the current situation. How much time will be needed for that? Under the most unfavorable circumstances, I think it will take about two years,” he said.

Chris Weafer, senior partner at Moscow-based Macro Advisory, said Putin’s comments reflected a greater political will to push overdue reforms, but acknowledged that the government lacks a clear strategy. He summed up Putin’s message as, “We’re definitely in a world of pain here and there is no obvious solution.”

Putin struck a defiant note against the United States and the 28-nation European Union, saying the sanctions they slapped on Russia after it seized the Black Sea region of Crimea in March were part of a historical campaign to weaken Russia.

To get his point across, he raised the metaphorical Russian bear.

“Sometimes I think maybe it would be better for our bear to sit quietly, rather than chasing around the forest after piglets. To sit eating berries and honey instead. Maybe they will leave it in peace,” Putin said.

“They will not. Because they will always try to put him on a chain, and as soon as they succeed in doing so, they tear out his fangs and his claws.”

Putin said he was referring to Russia’s nuclear arsenal, which protected its valuable natural resources.

“Once they’ve taken out his claws and his fangs, then the bear … (will) become a stuffed animal,” he said. “The issue is not Crimea. The issue is that we are protecting our sovereignty and our right to exist.”

Putin said he wanted a political solution to the crisis in Ukraine, where pro-Russian insurgents have battled Ukrainian government troops since April, leaving more than 4,700 dead.

He said Ukraine must remain one country and the two sides should hold a prisoner swap before Christmas.

Yet he defended Russia’s increased military activities, including Baltic air patrols that NATO says are putting civilian flights at risk, as a necessary response to what he described as Western aggression.

Putin said he was sure that Ukrainian President Petro Poroshenko wanted a peaceful solution but other forces in Ukraine did not. He urged the Ukrainian government to grant amnesty to the rebels and offer broad rights to eastern residents.

Despite his strong criticism of the West, Putin still held out hope for normalizing ties, saying Russia wants to restore full-scale economic and security cooperation if its interests are respected.

“Yes, we want equal relations,” he said, “but with full respect for our security and economic interests.”

Turning to domestic issues, the Russian leader seemed to soften his rhetoric against his liberal critics, whom he previously dismissed as Western stooges.

In an apparent goodwill gesture hours before the press conference, a Russian tycoon under house arrest since September, Vladimir Yevtushenkov, was released. Shares in Yevtushenkov’s company Sistema shot up more than 100 percent on Moscow’s stock exchange as Putin expressed hope that it would regain its market strength.

One of Sistema’s most lucrative assets — the oil company Bashneft — was transferred to government ownership this month, but Putin said money-laundering charges against Yevtushenkov have been dropped.

From The Associated Press. AP reporter John-Thor Dahlburg in Brussels contributed to this report.