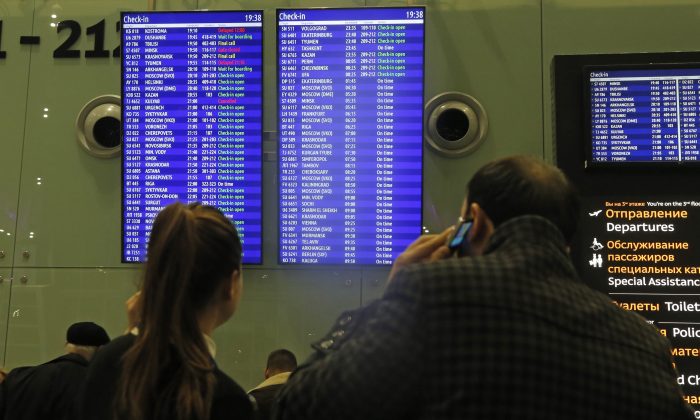 People look at an indicator board displaying flight information, at Pulkovo airport outside St.Petersburg, Russia, Friday, Nov. 6, 2015. Russia announced Friday it will suspend all flights to Egypt until security is improved at its airports, the first sign of wariness from Moscow after days of resisting British and American warnings that a bomb planted by the Islamic State group may have brought down a Russian plane in the Sinai Peninsula last week. (AP Photo/Dmitry Lovetsky)
International

MOSCOW—In an abrupt turnaround, Russia on Friday suspended all passenger flights to Egypt after days of resisting U.S. and British suggestions that a bomb may have brought down a Russian plane in the Sinai Peninsula a week ago.

The move dealt a sharp blow to both countries’ tourism sectors amid fears about security in Egypt. It foretold weeks of chaos as tens of thousands of travelers struggled to return home from Red Sea resorts including Sharm el-Sheikh, where the doomed flight originated.

Within hours of the Oct. 31 crash of the Metrojet Airbus 321-200 that killed all 224 aboard — mostly Russians — a faction of the Islamic State militant group claimed to have downed the plane in retaliation for Moscow’s airstrikes that began a month earlier against fighters in Syria. The claim was initially dismissed on the grounds that the IS affiliate in Egypt’s troubled Sinai region didn’t have missiles capable of hitting high-flying planes.

British and U.S. officials, guided primarily by intelligence intercepts and satellite imagery, suggested a bomb might have been aboard the aircraft. The Russians and Egyptians called that premature, saying the investigation had not concluded.

After Britain suspended its flights to and from Sharm el-Sheikh, Prime Minister David Cameron said Thursday it was “more likely than not” that the cause was a bomb. President Barack Obama also said the U.S. was taking “very seriously” the possibility that a bomb brought down the plane in the Sinai, where Egyptian forces have been battling an Islamic insurgency for years.

As the suspicions grew, Russia appeared unwilling to countenance the possibility, and Egyptian officials played down terrorism as a cause of the crash, with President Abdel-Fattah el-Sissi calling the IS claim “propaganda” designed to embarrass his government.

But on Friday, the head of Russian intelligence, Alexander Bortnikov, recommended a suspension of all flights to Egypt “until we determine the real reasons of what happened,” and President Vladimir Putin quickly agreed.

Kremlin spokesman Dmitry Peskov said the flight suspension order would last until “a proper level of aviation security is in place,” denying it run until the investigation was completed. He added that it “definitely doesn’t mean” Russia regards terrorism as the main theory.

Wreckage from the plane was brought to Moscow to be tested for any trace of explosives, according to Emergency Situations Minister Vladimir Puchkov. The samples came “from all parts where traces of explosives could be,” he said in televised comments.

France 2 TV, citing an investigator who had access to one of the Metrojet plane’s flight recorders, reported that “the sound of an explosion can be distinctly heard during the flight.” France’s BEA accident investigation agency said it could not confirm the report.

There was chaos, confusion and frustration at the Sharm el-Sheikh airport as Britain struggled to bring home some 20,000 of its nationals stranded since London halted its flights earlier in the week.

London approved the resumption of British flights to Sinai starting Friday and planned a wave of flights to retrieve its stranded nationals, but it banned passengers from checking luggage on the flights. Instead, any checked-in bags were to be brought later on cargo planes.

But the pileup of checked-in luggage overwhelmed the airport and disrupted flight operations, said Egyptian Civil Aviation Minister Hossam Kamal. So Egypt limited the number of incoming British flights to pick up the tourists, reducing them to eight Friday instead of the planned 29, he said.

Several flights that took off from London had to turn around or go elsewhere after Egyptian authorities told them they couldn’t land at Sharm el-Sheikh.

Hundreds of British tourists were brought to the airport for flights out, only to be told they didn’t have one. More confusion was caused by the checked baggage ban.

“When are we going home?” one irate tourist shouted at British Ambassador John Casson when he appeared in the departure hall trying to reassure beleaguered travelers.

Early in the morning, the Egyptians carried out expanded security checks as dozens of buses ferrying British and Russian tourists waited outside the airport, the line stretching up to a kilometer (half mile) as police inspected each vehicle.

Standing in a crush of people waiting to go through security, British tourist Terrance Mathurian said hotel staff told him and his family in the morning to head to the airport despite the conflicting information.

Besides Britain, Ireland also suspended flights to Sharm el-Sheikh on Wednesday. Since then, countries including Belgium, the Netherlands and France have told citizens not to travel to the Red Sea resort. Several carriers have stopped flying to Sharm, including German airlines Edelweiss and Eurowings and Slovenia’s Adria.

Dutch carrier KLM imposed a hand-luggage-only policy on flights out of Egypt, while Air France said it was reinforcing screening procedures in Cairo but still accepting checked-in luggage.

Russia’s suspension of passenger flights was more sweeping than the others, covering all of Egypt.

No plans were immediately announced for how to bring home the crowds of Russian tourists in Egyptian beach resorts, whose number was estimated as at least 40,000. Such an evacuation could take weeks, Russian tourism experts said.

Egypt is one of the most popular destinations for Russian tourists, especially in the winter when the sun and clear seas lure them away from gray, frigid winters.

Eastern European visitors are a crucial part of Egypt’s tourism market, making up 45 percent of all arrivals in June, according to Egyptian government statistics.

He said the packages averaged 1,000 euros ($1,100) per person — a quarter-billion-dollar blow. Egypt’s tourism sector has been staggering for years, and Russia’s has been hit hard in the past year by the fall of the ruble.

Tourism, which represents 11 percent of Egypt’s economy and almost 20 percent of crucial foreign currency revenues, is making a gradual recovery after years of political upheaval since the 2011 uprising that deposed autocrat Hosni Mubarak,

It was unclear when the Russian suspension would take full effect. Russian flagship carrier Aeroflot said its evening flight to Cairo took off empty, aiming only to bring passengers back.

While Russia still underlined that no conclusion had been reached about the cause of the Metrojet crash, it joined Britain in demanding stricter security at Egyptian airports.

Egypt maintains there is nothing wrong with the Sharm el-Sheikh airport, the main entry to Sinai beach resorts.

But a former senior official in Egypt’s Tourism Ministry, Magdy Salim, said “airport security procedures in Egypt are almost (all) bad” and marred by “insufficiencies.”

Salim said searches are sometimes lax, adding: “We understand why people are scared.”