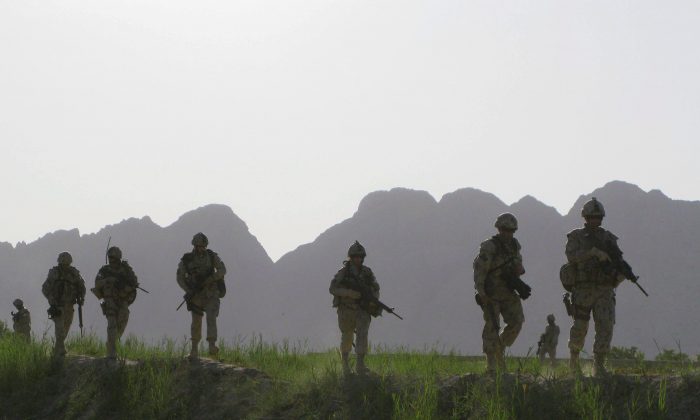 Canadian soldiers patrol an area in the Dand district of southern Afghanistan on June 7, 2009. The government is drafting a letter of assurance it hopes will end a class-action lawsuit by Afghan veterans related to an overhaul of their benefits and entitlements initiated 10 years ago. (The Canadian Press/Colin Perkel)
Canada

OTTAWA—The Trudeau government is drafting a letter of assurance it hopes will end a class-action lawsuit by Afghan veterans angry about a 10-year-old overhaul of their benefits and entitlements.

The legal challenge, which became a lightning rod under the Conservative government, was put in abeyance over a year ago in the B.C. Supreme Court, where it was filed on behalf of six complainants.

The legal time-out was intended to give the Harper government an opportunity to introduce a series of improvements to the so-called New Veterans Charter, which, among other things, replaced lifetime pensions for serious injuries with lump-sum awards and a patchwork of stipends.

Don Sorochan, the lawyer for the soldiers, says those changes—along with new measures introduced in the Liberal budget and the promise of a return to the lifetime pension—may be enough for them to drop the case.

He says a meeting earlier this month involving the minister, senior Veterans Affairs officials, and lawyers for the Department of Justice brought them close to a settlement, but the ex-soldiers want to see the federal government acknowledge its commitments in writing.

“We told the minister that we didn’t need another Rotary Club meeting where he goes around and shakes hands and says how nice everybody is,” Sorochan said. “We wanted to get a firm commitment from them about what their intentions are to implement the (minister’s) mandate letter.”

After being sworn in last November, Veterans Affairs Minister Kent Hehr was ordered, in writing, by Prime Minister Justin Trudeau to implement the Liberals’ campaign promises and Sorochan says the measures outlined in the mandate letter satisfy the grievances of his clients.

The Liberal budget poured $5.6 billion into veterans programs over six years, but it did not restore lifetime pensions.

Since there are thousands of veterans who come under the umbrella of the new system, Sorochan says it’s only natural that the government is trying to figure out how to straighten out the system in a way that’s fair to everybody.

The Liberal budget poured $5.6 billion into veterans programs over six years, but it did not restore lifetime pensions.

“My guys are quite happy with the way it is going,” Sorochan said, referring to both the regulatory changes and the amount of consultation federal officials have done with the veterans.

Indeed, Trudeau’s commitment to wounded soldiers was on full display May 2 in Toronto as he joined Prince Harry for events marking the countdown to the 2017 Invictus Games. He underlined the government’s recent commitments.

“Our soldiers deserve the greatest attention and much compassion from their nation,” Trudeau said. “They embody the best of the Canadian identity and have won our respect and our gratitude forever.”

Aside from embarrassing Conservatives among their core political constituency, the way federal lawyers defended the lawsuit three years ago caused enormous political damage.

Their statement of defence made clear that the federal government believed it had no special obligation to soldiers and that promises of care for the wounded, dating back to the First World War, were political statements not binding on present or future governments.

Sorochan says the language has since been modified, but he believes the debate strikes at the heart of the Constitution in the sense that it would be impossible for a nation to raise a citizens’ army during war—or even a peacetime volunteer force—without some kind of assurance that the wounded and the families of the fallen would receive special attention.