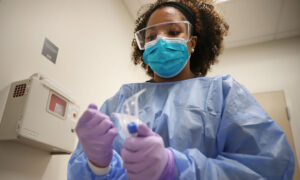 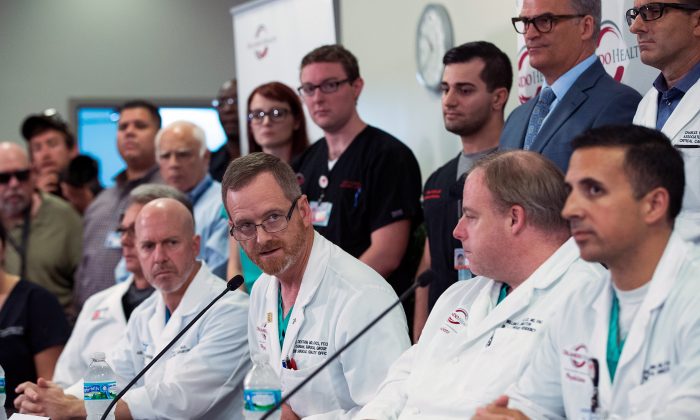 Pushed to the Limit, Medical Staff Emerge as Heroes After Orlando Terror Attack

Man who was shot, then trampled on, thanks hospital staff: "I will love you guys forever"
By Denisse Moreno

Dr. Gary Parrish was scheduled to leave at 3 a.m. on Sunday when the first wave of victims poured in.

“We didn’t quite know what was about to hit us,” said Parrish, the ER medical director for Orlando Regional Medical Center.

Within 30 minutes, surgeons, nurses, and other hospital staff who were off that night, rushed in to help.

“We’re used to gunshot wounds,” said trauma surgeon Dr. William Havron. “But this was somewhat of a surreal experience.”

A health official said she saw five victims brought in and thought that would be it—but patients kept coming, not only by ambulance, but by truckloads. Vehicles carrying victims were driven by police and ordinary citizens.

Havron recalled seeing patient after patient come in as operating teams rushed from one operating room to another.

The doctors and a victim spoke at a media conference at the hospital on Tuesday.

Angel Colon was not among the first wave of victims, he was playing dead on the nightclub floor.

“It’s still fresh to me,” said Colon, while sitting in a wheelchair Tuesday morning.

Colon, 26, said he was at the club on Sunday enjoying dancing and having fun with his friends. It was about 2 a.m. and he was saying goodbye to his friends, ready to go home.

“Out of nowhere we just hear a big shotgun,” he said. Gunman Omar Mateen, 29, opened fire in the nightclub, eventually killing 49 and injuring 53.

Colon was shot three times in the leg and fell to the floor.

As people tried desperately to escape from the shooter, Colon was trampled on and his bones were shattered.

He heard “people screaming, people yelling for help” as more shots were fired.

“I could see him shooting at everyone,” said Colon.

Related Coverage
Report: Wife of Orlando Shooter Tried Talking Him Out of Attack

A girl next to him was also shot.

But he says that “by the glory of God,” the attacker did not shoot him in the head and struck his hand and hip instead.

Colon said he played dead so the attacker didn’t shoot him again.

The victim said he saw Mateen going to another room, then coming back and shooting everyone that was already dead. Colon said he heard from others that Mateen was laughing while shooting people.

“This person had to be heartless, had to be ruthless,” said Colon, “to see all these bodies everywhere and he was enjoying it.”

Patrons told authorities that they had said Mateen at the club numerous times in the past.

“I have not seen him, but it scares me,” said Colon.

Gunman Inside Texas Walmart Has Been Shot Dead By Police; Hostages Reported Safe

Colon said a police officer rescued him by dragging him out in front of a Wendy’s restaurant, where many other survivors were left while the shooter engaged in a gunfight with authorities.

“There’s just bodies everywhere, we’re all in pain,” said Colon, who thanked the officer who helped him get out.

“If it weren’t for you guys I definitely wouldn’t be here,” he said about those who helped him, including the hospital staff.

“I will love you guys forever for doing that to me.”

Dr. Parrish said it was difficult because ambulance staff usually alert them about incoming patients so the hospital can prepare.

But these victims, who were just a couple of blocks away from the hospital were rushed in without any warning. The hospital staff had no idea what injuries they would be dealing with until the patients arrived.

Smith recalls calling in more surgeons at 2 a.m. and 3 a.m., including residents and a pediatric surgeon who wanted to help. Supplies were also brought in from other hospitals. Smith was visibly emotional on Tuesday as he remembered how loved ones waited to hear information about victims in the hospital.

Dr. Michael Cheatham said disasters are something the hospital planned for, but it’s difficult to prepare for adequately.

He also noted that the proximity of the nightclub to the hospital made a difference in saving lives.

“The victims three or four blocks away made a huge difference,” said Cheatham, “many were here within minutes.”

Hospital staff said they got two waves of victims. The first wave was at around 2 a.m., and the second was when police rescued other club goers, including Colon.

“This is the largest disaster we probably could have ever imagined,” said Cheatham.

“We have the best nurses in the world,” he said, pointing out that doctors only see patients for about 15 to 20 minutes, but that nurses take care of patients for 24 hours.

One of the nurses, Megan Noblet, who treated Colon, recalled getting the call at 3 a.m.

“He was very brave,” she said about Colon as other nurses were in tears.

“I cannot be more proud of this team,” Havron said about the hospital staff.

Orlando Regional Medical Center is currently treating 27 victims from the mass shooting on Sunday—six of them are in critical condition, staff said in a press conference on June 14.

The hospital admitted a total of 44 victims from the shooting on June 12.

Nine victims were dead after arriving at the hospital. Eleven other victims were transported to sister hospitals.

Hospital staff say the death toll may rise, and although the critically ill victims may survive, their injuries will have a lasting impact on their functionality.

Dr. Cheatham said the survivors are steadily improving, and 16 of them are in stable condition. Many victims are also still being operated on, he said. Eight operations were completed Monday, and eight were scheduled for Tuesday.

The hospital is now offering its staff emotional support. Programs from Boston, which helped during the Boston marathon bombing, and from Oklahoma, who aided during the Oklahoma City bombing, have reached out to the hospital in Orlando.