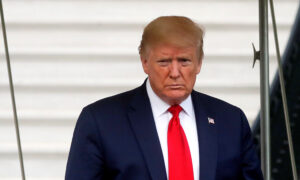 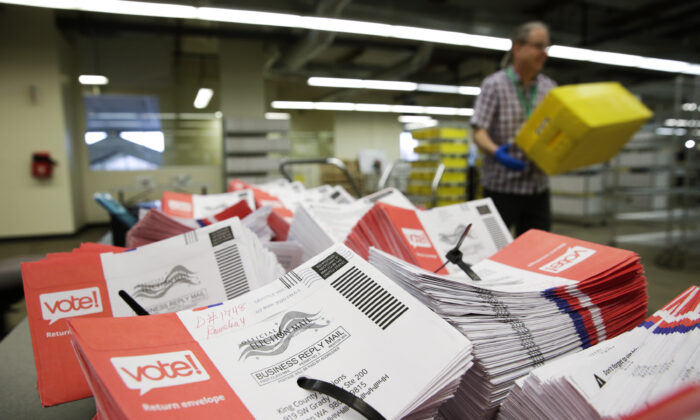 Empty envelopes of opened vote-by-mail ballots for the presidential primary are stacked on a table at King County Elections in Renton, Wash., on March 10, 2020. (Jason Redmond/AFP via Getty Images)
Politics

Push for Mail-In Balloting During Pandemic Is Partisan and Political, Experts Say

Republicans are growing increasingly concerned about the fresh push for voting-by-mail as prominent Democrats lobby for universal mail-in balloting nationwide.

On May 15, the Democrat-controlled House passed the $3 trillion Health and Economic Recovery Omnibus Emergency Solutions (HEROES) Act, which would give states and localities $3.6 billion to make their election systems safe for voters and poll workers while pandemic conditions persist. The measure seems unlikely to be approved by the Republican-dominated Senate.

Democratic National Committee Chairman Tom Perez told MSNBC on March 16 that states should allow residents to vote by mail in the remaining Democratic presidential primaries to help reduce the spread of the CCP virus.

Former Democratic Party presidential nominee Hillary Clinton said in a tweet March 18 that the virus is giving greater urgency to calls to “make voting by mail the norm.”

But President Donald Trump has made it clear he’s not enamored with expanding mail-in voting. He expressed his opposition to Michigan and Nevada augmenting their mail-in voting services over concerns about the pandemic.

In a tweet about Nevada on May 20, Trump wrote that he “can hold up funds to the State. Sorry, but you must not cheat in elections.”

Addressing Michigan, Trump wrote on Twitter that the state sent out absentee ballots “illegally” and that he would “hold up funding to Michigan if they want to go down this Voter Fraud path!” Michigan officials replied that ballot applications, not actual ballots, have been sent out.

With mail-in voting, paper ballots are sent to voters, marked by voters, and then mailed to a predetermined address or deposited at a secure drop box. Typically, a mailed envelope bearing a ballot must be post-marked no later than the scheduled election day. Somewhere along the way, one or more government officials have to view the marked ballot to process it, which means, unlike with in-person voting, it’s not a secret ballot.

Oregon, Washington, Colorado, and Hawaii carry out their elections wholly by mail.

California Gov. Gavin Newsom, a Democrat, signed an executive order this month declaring that in light of the pandemic, all registered voters in that state will receive ballots in the mail for the November election. Californians will still retain the option of voting in person. Other states are also considering adopting mail-in balloting regimes before the election.

Over the past two months, several states have delayed their presidential primaries, saying in-person voting heightens the possibility of CCP virus transmission.

Case law on voting during a pandemic is developing.

U.S. District Judge Fred Biery of Texas, who was appointed by then-President Bill Clinton, granted a temporary injunction May 19 allowing all voters in the state to vote by mail in upcoming elections.

“Any eligible Texas voter who seeks to vote by mail in order to avoid transmission of COVID-19 can apply for, receive, and cast an absentee ballot in upcoming elections during the pendency of pandemic circumstances,” Biery wrote.

Texas Attorney General Ken Paxton, a Republican, said he would appeal the ruling, and Gov. Greg Abbott, also a Republican, predicted the case would find its way to the U.S. Supreme Court “pretty quickly.”

Last month, the Supreme Court refused to halt voting in the Wisconsin April 7 primary based on fears that in-person ballot would spread the CCP virus. The election went ahead.

For years, the opinion among conservatives has been that the left tries to make it unduly easy to vote in order to promote voter fraud and allow activists to vote on behalf of the unmotivated and uninformed.

Mail-in voting makes it arguably too easy to vote, making the key act by citizens in the democratic process less solemn and serious, and is particularly susceptible to fraud, some experts say.

“The consensus, among people who study fraud carefully, is that voting by mail is a much more fertile area for fraud than voting in person,” Charles Stewart, the Kenan Sahin distinguished professor of political science at the Massachusetts Institute of Technology, told NPR in 2018.

In addition, more than 28 million mail-in ballots have reportedly gone missing since 2012, and this figure excludes, according to the U.S. Election Assistance Commission, ballots that were “spoiled, undeliverable, or came back for any reason.” Left-wing activists say that just because a mail-in ballot comes back unvoted, that doesn’t necessarily mean a crime was committed.

Widespread mail-in balloting is “a terrible idea,” said Richard P. “Pete” Hutchison, president of the Leesburg, Virginia-based Landmark Legal Foundation. The foundation recently battled the ACLU in court in an effort to preserve the integrity of elections in Virginia.

“It’s a power grab that the Framers would have been appalled at,” he told The Epoch Times. “Systemically, there are so many problems with voter rolls in most states, if not all states.

“They not only want mail-in balloting, but they want mass mailing of ballots, and you can be sure that they’d oppose any effort ahead of time to clean up voter rolls,” he said. “Democrats oppose that, every time, everywhere.

“It’s a recipe for disaster.”

But conservative activist Donny Ferguson said Republicans don’t understand how mail-in balloting can help them. Ferguson is a campaign consultant, former congressional aide, and president of Americans for a Better Economy, an Alexandria, Virginia-based nonprofit organization.

“Mail-in voting has long been a gold mine for Republican turnout. This is a case of Republicans cutting their own throats because of internet misinformation. Any GOP candidate can boost turnout by sending ballot applications directly to their supporters and following up with phone calls and visits. In many states, Republicans can even pick up the ballots and deliver them directly.

“Mail-in voting requires a signature match, and the records of who voted are public, so you can identify any voter fraud almost instantly.

“‘Vote harvesting’ only became a conspiracy theory because some California Republicans didn’t put any effort into a voter mail program in 2018, so when the voter mail came back, it was mostly from Democrats. There’s no evidence whatsoever the mail-in votes were fake, and there aren’t thousands of people who had fake votes cast in their name.

“Mail-in voting is just as secure as in-person voting, and Republicans could be using it to defeat Democrats if they were willing to put in effort.”

He said as a former Justice Department attorney, he litigated a Noxubee County, Mississippi, case from 2007 called U.S. v. Ike Brown in which he was able to prove that mail ballot fraud took place.

“Notaries would snatch ballots from mailboxes and end up voting the ballots for the voters.”

Dealing with a pandemic is no excuse for violating the sanctity of the electoral process, Adams said.

“Liberia conducted an in-person election during the worst part of the Ebola epidemic. … If Liberia can mitigate Ebola in an election, we can do it, too.”