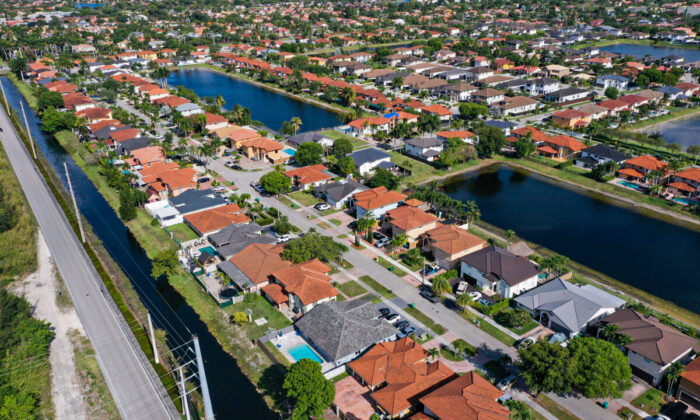 Single family homes are shown in a residential neighborhood in Miami, Fla., on May 10, 2022. (Joe Raedle/Getty Images)
Policies & Impacts

The Biden administration is encouraging local municipalities across the nation to change zoning rules to create higher-density neighborhoods. The plan has elements of the racial and environmental agendas Biden has been advancing on most fronts.

The Housing Supply Action Plan, announced in May, aims to ease housing costs by increasing the housing supply in every community.

“One of the most significant issues constraining housing supply and production is the lack of available and affordable land, which is in large part driven by state and local zoning and land use laws and regulations that limit housing density,” a May 16 White House statement announcing the plan said. “Exclusionary land use and zoning policies constrain land use, artificially inflate prices, perpetuate historical patterns of segregation, keep workers in lower productivity regions, and limit economic growth.”

Under the plan, the administration will pressure jurisdictions to rewrite zoning and land-use policies to increase density, by tying federal grant applications to zoning.

For example, this year, the U.S. Department of Transportation (DOT) gave higher scores for competitive grants totaling nearly $6 billion to jurisdictions that have implemented land-use policies to promote higher density. And, the U.S. Economic Development Administration (EDA) evaluates grant applications in part by EDA’s environmentally sustainable development investment priorities, which already include “infill development”—that is, new construction on land between existing buildings. Now it will add prioritization of projects that increase density in other ways.

Connecting Zoning to Racism and Climate

The Zoning laws are intertwined with climate change and racial justice, according to Sara Bronin, a professor at Cornell University’s Department of City and Regional Planning and associated faculty at Cornell Law School who specializes in land use and sustainable development.

She is the founder of Desegregate Connecticut, a self-described pro-home coalition of neighbors and nonprofits advocating for more equitable, affordable, and environmentally sustainable land-use policies in Connecticut and focused on expanding diversity in the housing stock.

Minimum lot reform could foster more equitable, sustainable communities, according to Desegregate Connecticut, because building closer together reduces consumption of resources, reliance on automobiles, and climate risks of sprawl and deforestation.

Bronin advocates for government-owned, multi-family housing buildings that would cut down greenhouse gas emissions by minimizing car use.

Bronin did not respond to The Epoch Times’ request for comment on Biden’s announcement.

According to Noah Kazis—a nonresident senior fellow with the left-leaning Brookings Institution, a Washington-based nonprofit public policy organization—current zoning, which he calls “exclusionary zoning,” not only harms the environment, but it also reduces the supply and drives up the cost of housing, hurting individuals looking for homes, as well as the overall economy.

“Restrictive zoning fuels racial and economic segregation, serving as the mechanism for exclusion and ‘opportunity hoarding’ by wealthy, white communities,” Kazis writes in an article for the Brookings Institution.

“Zoning changes will benefit builders because if you have a four-acre lot and you can put four houses on there, one per acre, you’ll make more money than if it’s sold where you could only put one house on four acres. There are places in the country where the zoning requirements are such that you have to have very, very large building lots,” Jerry Howard, CEO of the National Association of Home Builders, told The Epoch Times. “That’s not the most efficient way to do it, and some of those places aren’t even in rural America; they’re in suburban America areas that are just trying to preserve what they call ‘their way of life.’ Zoning is an issue that is very much a linchpin for what the cost of housing will be in any location.”

No matter how homebuyers feel about fewer single-family homes and more apartments and duplexes in the housing market, higher density is profitable for those in the housing industry, who are fully behind the zoning changes.

“For too long, land-use restrictions have driven up the cost of housing for too many,” NAR said in a statement in May in response to the announcement of the Housing Supply Action Plan. “NAR supports policies encouraging states and localities receiving federal dollars to explore high-density zoning and other land-use rules that lock out families. We also support new grant programs for localities to enact pro-housing policies.”

But Tom DeWeese, president of the American Policy Center and an advocate of individual liberty and property rights, warns that this “smart growth” is a political agenda designed to control people.

“If they get you living in a high-rise apartment instead of in your own single-family neighborhood, they can control your transportation—where you go. Smart meters can control the energy that you use in your apartment building. Smart meters will tell them all of your habits, how many people are living there, all kinds of information like that comes through them being able to read how you’re using energy,” DeWeese told The Epoch Times. “What you’ll end up having, as time goes by, is energy curfews—that at 10 o’clock at night, the energy will be shut off. I know this sounds nuts, but this is behind it.”

Even now, DeWeese says, apartment complexes are being built without parking spaces. The goal, he says, is to have stores and jobs within walking distance and eliminate the need for cars.

“Every single program that’s being put in place now, in a major or minor way, is all based on cutting back on that carbon footprint,” DeWeese said. Most apartments have private landlords, but more regulations are harming them. “Landlords are going out of business like crazy. Ultimately what will happen is, all housing will be government housing.”

Biden’s plan says it will ensure a greater supply of government-owned homes, and it offers several funding mechanisms to encourage more multifamily housing.

DeWeese says government-owned housing would lower the standard of living.

“Think about the low-income people who are already living in government housing, and you hear the horror stories of what they’re living with,” DeWeese said. “The heat and air conditioning doesn’t work. Broken windows aren’t fixed. There are gangs and all kinds of drug dealers and criminals that are hanging out. Danger everywhere. Why? Because the landlord there is a government bureaucrat who can care less. If you have a private landlord, he cares about his property.”

The government should want people to own their own homes, DeWeese says, because private ownership is how people build wealth and stimulate a healthy economy.

“How does the average person build their own personal wealth? Working a job every day isn’t going to make you rich. It’s sustenance. To build wealth, so that you have money to enjoy and to retire on, private property ownership is the means,” DeWeese said. “You start with a smaller home, you end up buying a bigger one. They always gain in value. And that’s how you build personal wealth. And when you begin to cut that out, then people are just subjects.”

“People living in single-family homes and people living in rural areas are both independent people, “ DeWeese said. “These create the middle class. And if people are independent, they’re independent of [government] control. You have to look at this as to, who is doing this and what their motivation is. We’re dealing with people working on government control in every aspect of our lives. Radical statement, I understand. Prove me wrong.”