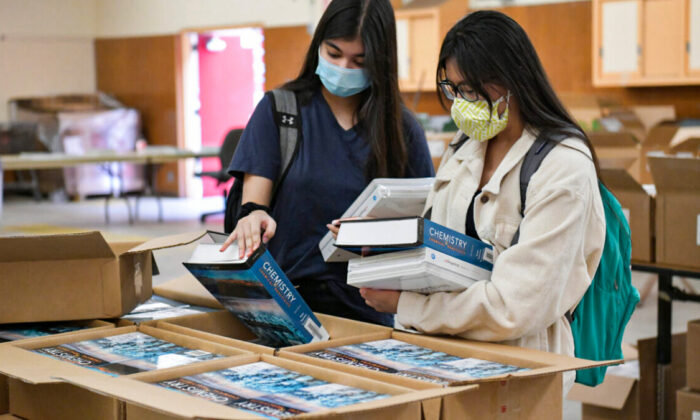 A global push to provide students with much more than just education under the banner of “community schools” has left many parents wondering what the program is all about, who’s behind it, and why its agenda is centered around the concept of “equity.”

A full-service community school strives to “meet the social, emotional, physical and mental health, and academic needs of students,” according to the U.S. Department of Education.

It’s “the next generation of coordinated school health,” says the National Education Association (NEA), the largest teachers union in the country, in response to a model for these schools developed by the U.S. Centers for Disease Control (CDC) and an organization once called the Association for Supervision and Curriculum Development that now goes by ASCD.

The CDC calls them “healthy schools” and has developed a 10-part framework for addressing all aspects of a child’s health on campus called the Whole School, Whole Community, Whole Child (WSCC) model.

But community schools don’t only address students’ health. The NEA describes a community school as “a network of partnerships offering services that remove barriers to learning, like trauma, hunger, homelessness and the myriad of other problems faced by families living in poverty.”

On the NEA’s website, Cindy Long recounts an example in Las Cruces, New Mexico that offered mental health services to a 13-year-old boy who witnessed the murder of his uncle, then days later lost his father to suicide.

“[T]he full-time community school coordinator spent hours researching and applying for a grant to pay for his father’s and uncle’s funerals, a time-consuming effort that would be impossible for staff at a regular public school to handle on top of regular workloads,” wrote Long.

Long said the hope is that these services can be expanded to address “the needs of a student’s siblings, parents, grandparents, and neighbors. The idea is that lifting up a student isn’t possible unless her community is lifted up, too.”

However, some parents and community members disagree with schools taking on these far-reaching responsibilities.

Taking on ‘the Role of the Parent’

Kelly Schenkoske, a California parent who has extensively researched community schools and hosts a podcast called “A Time to Stand,” told The Epoch Times the CDC and ASCD are working together “to turn every school into a community school,” and that while the schools may sound wonderful, there are legitimate concerns.

“The schools are trying to take on the role of the parent and remove the parent from their relationship with the child. This is a complete obstruction and an assault on the family,” said Schenkoske, who homeschools her two children. “For me, the biggest concern with all of this is having the school be the nucleus of every community and handing over more control to the government and all of these ‘experts’ who are going to invade the home and tell families how to parent.”

Schenkoske became especially concerned when she learned the California Teachers Association (CTA), one of the largest teachers unions in the state, and the NEA have fully backed the WSCC model and that state educators recently held a conference in Los Angeles where they discussed community schools and multiple plans centered around equity, she said.

The United Nations (UN), the World Health Organization, most U.S. states, teachers and many non-government organizations also support the push for community schools.

California has already invested $4.1 billion in the Community Schools Partnership Program, including about $649 million in grants to 268 school districts across the state. The Los Angeles Unified School District (LAUSD) received more than $44 million.

The state program offers various grants to partners ranging from $100,000 to $2 million, and the U.S. Department of Education is also offering grants through its Full-Service Community Schools (FSCS) program.

CTA Vice President David Goldberg did not respond to inquiries, but he said at a virtual press conference on June 6 the teachers union is “all in” for community schools.

He applauded the state’s “deeper investment” in the community schools model, stating that “academic learning does not exist separately from social emotional learning.”

Echoing California Gov. Gavin Newsom’s recent assertion that democracy itself is under attack in the United States, Goldberg touted the community schools model as a way of “developing democratic processes” to include the voices of parents, students, educators, and administrators at the table.

Former teacher Ingrid Villeda said she left her position at the 93rd Street Academy in south Los Angeles to become the community school coordinator at the elementary school. She told The Epoch Times that most of the new funding will go to pay salaries for the next five years for community school coordinators, parent representatives, and employees with the Healthy Start program, another initiative that was designed to increase the health of women and children.

Community schools differ from other schools because they get input from “community stakeholders,” Villeda said.

“Traditionally, a principal arrives at a school, and it’s their vision that is rolled out, and when those principals change or go to other schools, the school goes through this trajectory of change until another leader comes in, and then it stabilizes again,” she said. “With community schools, and all stakeholders having a voice, you create a vision that includes everyone, so it’s not dependent on me or the principal, but on our needs … and the vision is there for the long term.”

Villeda has worked with the community to provide free vision and dental screenings for children. Out of 925 students at the school, 350 were able to get free eyeglasses, she said.

In LAUSD, some high schools have health centers on campus. Her school has a partnership with nearby Fremont High School which is equipped with a full-service health center.

“So usually, if parents tell me they need to take their kid to the doctor … we call directly and we actually make an appointment for them, and show them how to get there,” Villeda said.

Currently, there are about 30 community schools operating in Los Angeles and six in San Diego with plans to convert 10 additional schools this year and more in the future, according to Villeda.

The NEA and the CTA say there are about 5,000 community schools nationwide.

Equity: Who Decides What a Child Needs?

Villeda, a self-described Democrat and “lefty” union activist, said that although equity means different things to different people, to her it means having access to services and opportunities.

“Equity to me is not that we all have the same, but that everyone has what they need,” she said. “And there are some of us that need more than others.”

If children don’t have everything they need, then it becomes the problem of the schools, Villeda said. The schools are then forced to find solutions, and that’s what they’re doing through community schools, she said.

However, James Lindsay, author of “Race Marxism” and co-author of other books such as “Social (In)justice,” and “Cynical Theories,” told The Epoch Times that to understand the new education lingo, parents should first be aware that “equity means socialism.”

Equity is the “rebranding of socialism,” he said. “It’s the adjustment of shares so that individuals and groups are made equal.”

This means the proponents of equity, including the World Economic Forum (WEF), want to dismantle and rebuild “the whole system” of food distribution, transportation, and housing so the outcomes are made more equitable, Lindsay said.

He claims the WEF is also trying to create a bottom-up demand for health equity among the youth and ultimately change those systems in ways that may not appeal to everyone.

“They’re redesigning the whole system to create better so-called health outcomes, and they use it to justify bringing in things like ‘affirmative’ trans health care, as they call it,” he said.

“People need to understand that there is a purpose behind this, and it’s largely controlled by a few people who want to reshape what’s going on in the world according to what they think is necessary or that they want,” Lindsay said.

The WSCC model “mirrors the Soviet model where a council of appointed individuals make all the decisions with the schools,” he said.

A University of California, Los Angeles (UCLA) document lists Planned Parenthood, which has actively supported “gender-affirming care,” as a potential partner of community schools. But schools and the medical community have recently come under fire for using this policy to encourage the use of puberty blockers, cross-sex hormones, and surgery on minors who identify as transgender.

Lindsay contends that these transgender medical interventions are “not care,” but are instead “amputating children’s genitals and sterilizing them.”

Planned Parenthood is the single largest provider of sex education in the U.S., reaching 1.2 million people with education and outreach each year and promoting Comprehensive Sex Education as well as programs for LGBT youth.

In Dec. 19, 2019, Planned Parenthood of Los Angeles (PPLA) issued a press release announcing its instrumental role in the opening of 50 “Wellbeing Centers” in L.A. high schools, billed as the “first-of-its-kind collaboration between local partners to address the social, emotional, and sexual health needs of young people throughout Los Angeles County.”

According to the CDC’s virtual healthy school tour, under the WSCC model, school-based health centers can refer students and families to the public health department “for family planning, prenatal care, and concerns about sexually transmitted diseases,” and health educators will “frequently collaborate on activities and training for children and adolescents in the community.”

Planned Parenthood did not respond to an inquiry about whether its role in sex ed would be expanded under the community schools model nor whether it has applied for or received grant money as a community partner.

Meanwhile, Kimberly Ells, author of “The Invincible Family: Why The Global Campaign To Crush Motherhood and Fatherhood Can’t Win” and a policy advisor for Family Watch International, said she’s opposed to the WSCC model.

More and more parents are opting for homeschooling and realizing they may be better at educating their own children than the public school system they’ve trusted in the past, she said.

Ells wrote an article earlier this year for The Daily Signal, condemning “Communist-Style Community Schools” which she views as a globalist attack on the traditional role of parents and families.

“It’s like the worst example of cutting off the branch that you’re sitting on that I’ve ever seen. To try and undercut the family is to undercut civilization, because societies can’t thrive without strong families,” she told The Epoch Times.

A chapter in her book exposes the UN’s push to make Comprehensive Sexuality Education (CSE) a “human right” of all children, while the program focuses heavily on gender theory and advocates for abortion, Ells said.

Another chapter focuses on the UN’s Convention on the Rights of the Child, and how it exploits health to include many of these controversial medical practices, she said.

“We need to wake up to the fact that there is a global agenda,” Ells said. “Even in the Sustainable Development Goals, one of the goals is health, but then it depends on what you believe ‘health’ to be.”

The California Department of Education, CTA, and NEA did not respond to inquiries.