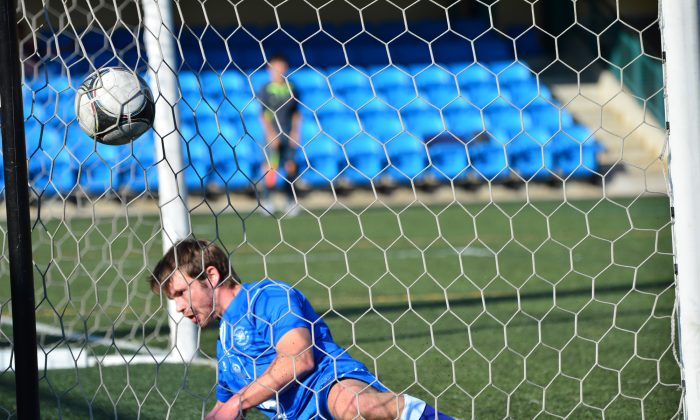 Hat-trick hero ... HKFC Albion’s Tom Taw follows the ball into the net after heading his second of the game against Antonhill in Divsion One of the Yau Yee League on the weekend. (Bill Cox/Epoch Times)
International

Three games again featured in the Hong Kong Football Association Championship this weekend where challengers tried to put some pressure on First Division leaders Kitchee. Meanwhile, in the Yau Yee League the past week generally saw the leaders extend their leads in the standings in most of the competitions’ divisions, though Division One remains tight.

In Saturday’s (Nov 30) action in the HKFA First Division, Sun Pegasus won an exciting game to end the weekend six points behind leaders Kitchee, and one point behind South China, with a game in hand.

Sun Pegasus won 4-3 against Eastern Salon in a match that went down to the wire.

Sun Pegasus equalised in the 48th minute when a header from Admir Rascic was forced in by Paulo Cesar.

Jaimes Mckee gave Sun Pegasus the lead after 60 minutes and went two goals in front after 66 minutes when Admir Rascic fired in a penalty.

Tse man-wing reduced the deficit for Eastern Salon in the 75th minute when he took a pass from Manoel Santos before scoring.

Giovane Da Silva equalised for Eastern Salon in the 83rd minute, only for Sun Pegasus to snatch the three points from a thrilling game when Paulo Cesar drove home the winner in stoppage time.

Tsuyoshi Yoshitake restored Yokohama’s lead from a penalty after 30 minutes, only for Sunray Cave JC Sun Hei to equalise through Jean Kilama after 36 minutes.

Reinaldo Peres scored what proved to be the decider after 79 minutes to win the game for Sunray Cave JC Sun Hei.

In Sunday’s late game, South China moved into second place on the table, five points behind Kitchee after a 2-0 win against BC Rangers. South China took the lead after 30 minutes, at the Hong Kong Stadium, when Ko Kyungjoon headed past goalkeeper Leung Hing-kit. South China doubled their lead in the 43rd minute when Diego Martins finished from Jack Sealy’s cross.

In the HKFA Second Division over the weekend, the leaders all maintained their positions and extended their leads over the rest of the division with convincing wins. Woo Foo Tai Po won 3-0 against Lucky Mile; HKFC thrashed Wing Yee 7-0; and Wong Tai Sin won 5-1 against Tai Chung. This means that Woo Foo Tai Po lead the division on 26 points; with HKFC second just one point behind; and Wong Tai Sin third a further point back.

The Third Division saw Yau Tsim Mong retain their leadership position after defeated Fire Services 3-1. They lead the table on 34 points with Metro Gallery Sun Source second on 31 points after their 4-1 win against Mutual.

USRC retain the lead with a 4-2 win over KCC Dragons, while HKFC Wanderers won a tight game with Interglobo Colloids 1-0 to stay 2 points behind the leaders. The two leading contenders for the league championship meet this week for a decisive game at the half-way point and prior to the Christmas break.

In the early game at Sports Road, Albion took an early lead after just over a minute when a right wing cross was not cleared and Tom Taw rifled into the left-hand corner from eight yards.

Albion doubled the score soon after in the 6th minute when a long ball down the right touchline was taken by Richard Maton, where he crossed from the six yard box to the far post, where it was headed into the corner of the net by Taw. This was his and Albion’s second goal.

In the 40th minute a cross from the right wing by Masayuki Sakai was parried by the Antonhill goalkeeper straight to the feet of Taw, who slotted the goal from 6 yards for his hat-trick. Albion took this 3-0 lead into the half-time break.

Albion failed to add to their score in a scrappy second half and the score stayed the same until the final whistle.

In Division Three, HKU70’s remained joined in the leadership with WYFC06 after the former’s 9-2 win over Grasshoppers and the latter’s 2-1 win over HKUSA.

In the Division Four, IES maintained top spot after a 5-0 win over WYFC84 to extend their lead at the top of the table.