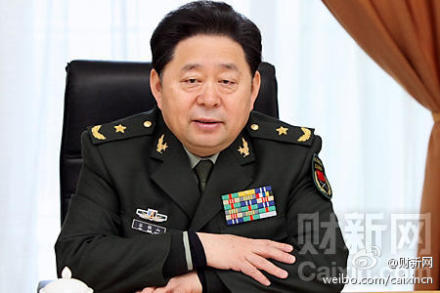 Gu Junshan sits in a military meeting before his purge. Gu reportedly hired an assassin to take down a rival military leader, according to unconfirmed Chinese reports. (Screenshot via Caixin.com)
China

Gu Junshan, a former deputy chief of logistics in the People’s Liberation Army, was reported to have sought the services of an assassin to take out a leading general in the force, according to reports in the Chinese press.

The details of the case were touched on by Phoenix Weekly, which ran a number of articles about the Gu takedown recently. Phoenix is a Hong Kong-based media company, which runs a satellite television station and other media properties, and which usually hews closely to the Party line.

“A person familiar with the matter said that… Gu Junshan used substantial funds to pay off a triad-linked assassin, in preparation for murdering a high-level general,” a report by Phoenix Weekly said. The report was later deleted from the magazine’s website, but was stored elsewhere online.

Gu reportedly gave detailed instructions about where the general stayed near the Summer Palace, a former royal park with lakes, gardens, and temples, as well as details of the general’s daily travel schedule. He even provided the assassin with a weapon, the report said.

“He directed the assassin to strike when the car pulls up to the compound and honks the horn,” the report said, adding that the account had not been verified.

Other reports indicated that the likely target of the alleged assassination plot was none other than Liu Yuan, the son of Liu Shaoqi, who was once Mao Zedong’s right hand man, before he was purged and later died in isolation and misery. Liu Yuan, a general and the political commissar of the General Logistics Department, is said to be close to Party leader Xi Jinping, and is being considered for a position on the Central Military Commission, which presides over the armed forces.

Liu has been outspoken about corruption in the military, and is believed to have helped Xi Jinping take down key military officials Gu Junshan, and his powerful ally Xu Caihou. Both men ran immensely corrupt empires within the armed forces.

According to Oriental Daily, a Hong Kong-based pro-Beijing newspaper, Gu’s military ally, Xu Caihou, former vice chairman of the Central Military Commission, was also said to have tried to assassinate Liu Yuan four times in the months of March, July and September 2012. The attempts reportedly included a fire in the fuel tank of his car, a bomb thrown at his vacation suite, an attempted shooting, and a gas explosion in his bathroom. The veracity of such reports is, as usual, quite unclear.

Before the 18th National Congress of the Communist Party in November 2012, when the Party’s generational leadership change took place, Liu Yuan came out in public support of Hu Jintao, the former Party leader, and Xi Jinping, the incoming leader, while helping with the removal of Gu, Xu and others in that camp.

During a Central Military Commission meeting from Dec. 25 to Dec. 28, 2011, Liu Yuan is said to have revealed the scope of corruption related to Gu in front of the top Chinese military commission leaders including Hu Jintao, Guo Boxiong, Xu Caihou and Liang Guanglie.

“You three military representatives, having been in your posts for years, are responsible for serious corruption in the military,” Liu spoke while pointing to Guo, Xu and Liang, according to quotes widely attributed to him in overseas media that specialize in such insider reports. Again, it the veracity of such accounts is indeterminate—though it squares with what later took place.

After the meeting, Hu Jintao began looking into Gu Junshan; and once he was pinned down, he was said to have revealed the details of corruption of the others, especially his patron Xu Caihou.