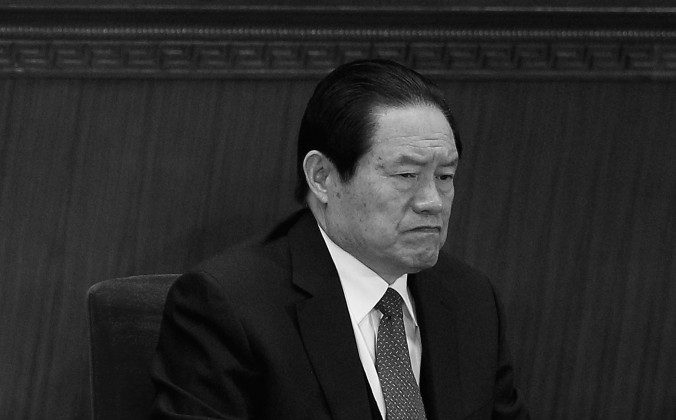 Zhou Yongkang in the Great Hall of the People on March 3, 2011, in Beijing. (Feng Li/Getty Images)
China

Chinese authorities announced a major shuffling, and purge, of key personnel in the domestic security system in provinces around the country recently. The move was explained in the media in predictable terms: strengthening the rule of law and building a fair and professional legal system. A closer examination, however, shows that many of the men targeted had significant ties with Zhou Yongkang, the former head of the security system who now sits in prison.

That such significant personnel changes would still be taking place in 2016—over two years after Zhou was first formally put under investigation, and after several major rounds of reorganizations and arrests—seems to hint at the breadth of the political network of which he was a leading member.

The changes affected nine provinces—Zhejiang, Jiangsu, Guangdong, Hubei, Heilongjiang, Yunnan, Guangxi, Jiangxi and Qinghai—the two “autonomous regions” of Xinjiang and Ningxia, and the cities of Beijing and Shanghai: 14 new heads of courts and Procuratorates (China’s version of a public prosecutor, though it is also endowed with investigatory and other powers), and three new heads of public security bureaus took office, reported state-run media Legal Weekly on Feb. 17.

The most prominent changes took place in Zhejiang Province and Beijing, the former with the new chiefs of the provincial Supreme Court, Procuratorate, and Public Security Bureau, the latter with new presidents of the Supreme Court and the Procuratorate.

According to Legal Weekly, 8 of the 17 individuals were transferred to a new location. An example is Wang Zhengsheng, originally the head of public security in southwest Ningxia, who was moved to the same post in Qinghai, which is nearby. Of the 14 heads of courts and Procuratorates who stepped down, 11 resigned because they had exceeded 63 years of age. Age limits as exercised by the Party, however, are often flexible mechanisms for either excluding political enemies, or face-saving explanations for those on the losing end of a power struggle.

What is clear, however, is that many of those who resigned enjoyed close ties with Zhou Yongkang, named the head of the Political and Legal Affairs Committee (PLAC) of the Communist Party in 2007.

The PLAC oversees China’s secret police, its domestic security and surveillance apparatus, most kinds of detention facilities—including prisons, labor camps, black jails, brainwashing centers—and judicial and prosecuting agencies. Its budget in recent years has exceeded $100 billion, making it, with the exception of the military, the most powerful bureaucracy in the country.

Network of Loyalists of Former Chinese Security Boss Rooted Out

In June 2015, Zhou was sentenced to life imprisonment on charges of receiving bribes, abuse of power and leaking state secrets.

The glue that bound Zhou to his own patron—the former Party leader Jiang Zemin—and unites many of the officials who have been removed recently, is their active roles in executing the signature political mobilization of the Jiang Zemin era: the persecution of Falun Gong. Falun Gong is a spiritual discipline that became popular in the 1990s, but was the target of an intense and violent suppression ordered by Jiang in July 1999. Political analysts at the time understood that Jiang was putting his stamp on the Party system by creating an enemy and forcing the Party to swear allegiance to him. He is known to have actively promoted those who were most committed to carrying out the campaign.

Chen Xu, who resigned as the top prosecutor in Shanghai, was named by the World Organization to Investigate the Persecution of Falun Gong, a human rights research and advocacy group, for crimes against Falun Gong practitioners.

Liu Liwei, who stepped down from his post at the head of public security in Zhejiang Province, was also highly active in pursuing anti-Falun Gong policies, according to Minghui.org, a Falun Gong website that acts as clearinghouse for first-hand reports from China. Liu was also the director of a provincial committee designed engender hatred toward Falun Gong in communities and villages, where Chinese would previously had performed the meditative exercises together in a park.

Mu Ping, the former head of high court in Beijing, recalled in a meeting how dishing out “punishment” to Falun Gong practitioners was one of his contributions to “stability” in China’s capital before the Beijing Olympics, according to Chinese news portal Sina in November 2008.

In Guangxi, Luo Dianlong, the retired high court president, hosted a meeting in November 2011 on how the court should carry out Zhou Yongkang’s orders, reported the official website of Guangxi High Court. In a mid-year meeting, Luo spoke of how fighting the “heterodox religion” (i.e. Falun Gong) was a prerequisite for “maintaining social stability,” according to Chinacourt.org, a website established by the Supreme Court in China.

“For Xi’s administration, it’s necessary to purge the political and legal organs, because Jiang Zemin’s faction had created many different problems through these Party apparatuses,” remarked the independent political commentator Li Shanjian in an interview with the Chinese-language Epoch Times.

Zhou Yongkang’s rule of the security apparatus saw harsh methods of security enforcement expanded to broader groups in society, including petitioners, those who protest the forced demolition of their homes, and any who take action considered threatening by the Party, according to Li Shanjian. “This has resulted in a lot of anger among the people and has become a social time bomb.”