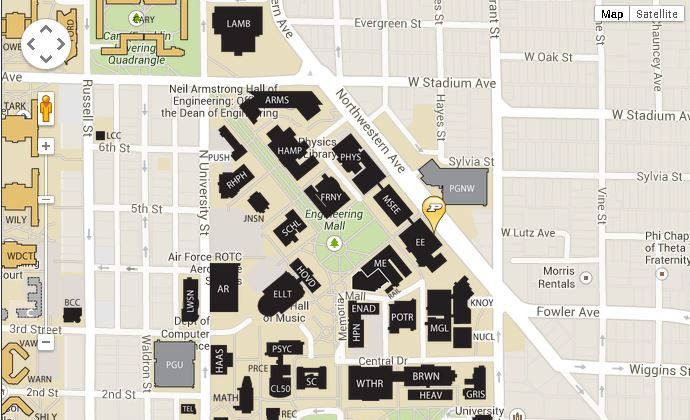 The electrical engineering building at Purdue University is highlighted by the "P" symbol.
Crime and Incidents

A shooting on the Purdue University campus on Tuesday prompted a partial lockdown and left one male student dead.

The shooting happened inside the Electrical Engineering building. One suspect is in custody, said Tim Sands, provost of the university.

Sands says he didn’t immediately know the identity of the person killed or the person’s connection to the university. But local reporters said that the victim was a teacher’s assistant.

Campus police chief John Cox says the suspect is in custody after surrendering outside the EE building.

Cox says the person appeared to have targeted the victim.

Two students told Justin Mack, a reporter with the Lafayette Journal & Courier, that the heard what sounded like two gunshots, and saw someone who possibly had blood on his hands.

At least one person was taken from the building via ambulance.

Guns are prohibited an Purdue’s campus.

Campus-wide activities were resumed several hours after the shooting, but the university then announced that classes are cancelled tonight and all day Wednesday. In addition, a  candlelight vigil is scheduled for 8 p.m. between Hovde Hall and the Engineering Fountain.

Police cleared the building after over an hour of searching. Students told Mack that police were inside the building with assault rifles drawn. Dozens of police and Department of Homeland Security vehicles were on the scene during the search.

Purdue is in West Lafayette, Indiana and has about 40,000 students.