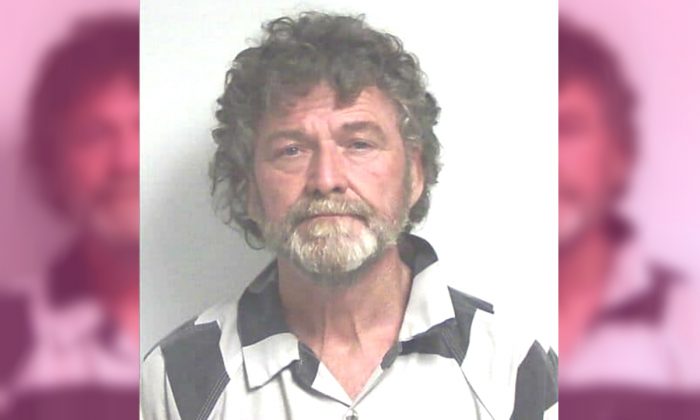 A puppy rescued from a cramped puppy mill didn’t know how to sleep lying down, so stood swaying on his feet with his face in a soft dog bed, in a video that quickly went viral.

The owner of the puppy mill in Georgia, Reason Craig Gray, currently faces charges of animal cruelty and obstruction, the Berrien County Sheriff’s Office said in a statement on March 8.

In total 700 animals were found at a puppy mill in conditions that police described as “out of control and inhumane.”

But the plight of one particular puppy, a poodle rescuers have named Knight Jordan, went viral after a video taken by his foster carers showed the puppy on his first night outside the puppy mill.

The organization that shared the video, Releash Atlanta, wrote on its Facebook page,  “Let this sink in … he is beside a dog bed but has no idea what to do with it but he’s completely asleep.”

This is Jordan Knight last night, the first night in his foster home… he is one of the puppy mill dogs. Let this sink in… he is beside a dog bed but has no idea what to do with it but he’s completely asleep. He has likely lived his entire life sleeping like this, learning to get comfortable standing, which is why even their toenails grow straight out versus curling. This is what pure greed did to this dog. He is so unfamiliar with a home and his surroundings that he’s living as if he was still in those cages piled on top of other dogs just trying to stay alive and get comfortable any way he had to. We will share the good, the bad and the ugly on their progress because they deserve their reality to be shared. We also see a few organizations have their mill dogs already available for adoption and we think that’s a mistake. Sure, some may be ahead of the game and may be ready sooner than others, but to give them 4 days and throw them out into the world to set them up for failure is just cruel. Please, if you’re considering adopting one of them this soon, expect to need a lot of patience. We will do better by our mill kids, we owe that to them ❤️*UPDATE* His foster mom went over there after this 20 second video, scooped him up, put him in the bed with the blanket and he slept okay his first night. If we don’t show the reality, there would be no change. So this is how he was when he got to her, it is not how she left him. Please understand we have incredibly loving foster homes and he is in one of the best. But without exposing the reality of what these dogs have been through, this man likely wouldn’t be in jail. Follow along our Facebook page to see all of their updates ❤️Visit 👉🏼 https://www.facebook.com/760605314005538/posts/2204367346295987?sfns=mo to see our recent on Jordan Knight

“He has likely lived his entire life sleeping like this, learning to get comfortable standing, which is why even their toenails grow straight out versus curling,” the organization continued.

The video quickly earned Jordan many concerned hearts gaining over 1.5 million views in a week.

The organization later wrote, “His foster mom went over there after this 20-second video, scooped him up, put him in the bed with the blanket and he slept okay his first night.”

Some of the 700 dogs were taken to the Atlanta Humane Society.

“These dogs have been living in crates their whole lives—one tiny crate stacked on top of another,” wrote the society in a statement. “They’re matted, covered in feces and have never been held or walked.”

This morning, our team is bringing some of the 700 dogs found living on a property in South Georgia into our…

The owner of the puppy mill, Gray, 58, of Nashville, is a licensed pet dealer, according to the county sheriff.

Gray initially voluntarily surrendered 630 of the dogs. He admitted to later bringing puppies back onto the property. An additional 85 dogs were rescued on March 7 after a search warrant was obtained.

“There are many questions yet to be answered,” Berrien County Sheriff Ray Paulk said in a statement. “One huge one is how this licensed pet dealer was allowed to have an operation with this many beautiful creatures to be able to populate to the point of being out of control and inhumane.”

“The homeowner, I believe loved the animals, but the situation got so out of control that the sheer numbers, he couldn’t handle any longer,” Tim Hill of the Humane Society of Valdosta Lowndes County told local station 11Alive.

Hill said the animals seemed to have been fed and watered.

A week later, and Jordan is now used to sleeping on a comfortable bed, according to Releash.

With great interest in Jordan sparked by the first video, a video of the puppy learning to play with other dogs for the first time also quickly went viral.

“For the first couple minutes (not pictured) he just stared at the other dog quizzically, wondering why he was wiggling, wagging, bowing down, and barking at him,” wrote Releash. “Then at the end, he really gets the hang of it and starts imitating the other dog!!”

We’ve had a lot of people messaging us for updates on Jordan Knight (the NKOTB former puppy mill pup that was sleeping standing up), and we’re happy to report that he’s doing GREAT and making progress every day!!! Here’s a cute video of Jordan learning how to play! 😍 For the first couple minutes (not pictured) he just stared at the other dog quizzically, wondering why he was wiggling, wagging, bowing down, and barking at him. Then at the end he really gets the hang of it and starts imitating the other dog!! We’ll be sure to post an update every few days for all his fans. In the meantime, his foster mom, Melissa Lentz, posts daily updates on him on her personal page for anyone that needs a little more Jordan Knight in their lives (the posts are public so no need to friend request). ❤️🐶🐾

But there is a long road to recovery for the dogs, which on top of being physically neglected, are also traumatized emotionally and mentally scarred, explained the organization. “To expect them to suddenly change overnight is impossible, but we are doing our best to erase their past and replace it with love, attention, and comfort while they learn this whole new world of theirs.”