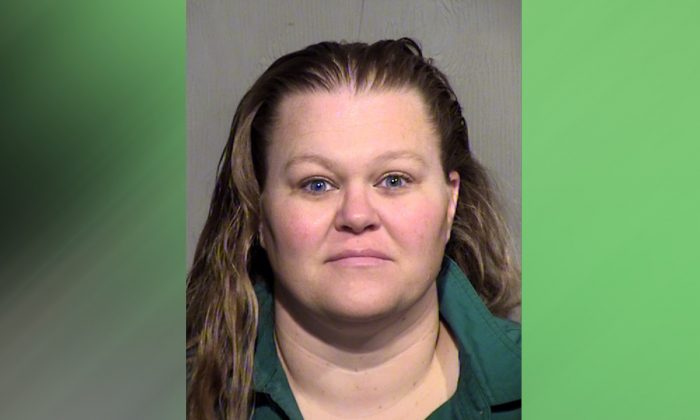 Puppy Dies After Being Left Outside Without Water in Phoenix

A Phoenix woman allegedly left four puppies and one adult dog outside without enough water in hot temperatures, causing the death of one of the puppies on July 2.

Police said the Arizona Humane Society was notified about the dogs, which were located at a home near 16th Street and Southern Avenue, reported ABC15 Arizona.

The responder took one of the puppies to an animal hospital before it died. The other puppies are now being treated for ticks and other health issues.

The high temperature that day was 107 degrees, and the dogs were reportedly found outside the home with a dry bowl that had no water.

The owner Ruby Maude Marlow, 38, was arrested and charged with animal cruelty.

According to the Maricopa Public Records, she’s detained on charges of “Count of ANIMAL-CRUEL-NEGLECT-PHYS INJ, (4) Counts of ANIMAL-CRUEL NEGLECT/ABANDON.”

She told investigators that she saw the dogs in the morning and they had about a gallon of water in their bowl.

She also said the dogs often knocked over their containers of water. “What am I supposed to do?” Marlow told investigators when asked about the puppies, according to ABC15.

The responders suggested that since the dogs often knock over their bowls she should have kept multiple bowls of water for them.

The Arizona Humane Society told the media outlet that the dogs may be put up for adoption after the investigation concludes and the dogs are treated.

PD: Puppy dies after being left with no water outside of #Phoenix home, woman arrested: https://t.co/qf6BORSA0T #abc15 pic.twitter.com/DPwaUgatBI

In another case of animal cruelty, a 19-year-old woman in Murray who bound her 3-month-old pup’s mouth to keep her from barking faces felony charges for “torturing a companion animal.”

Alexis Marie Callen tortured her dog, Shadow with an elastic hair tie and was charged with a third-degree felony on June 18, reported the Gephardt Daily.

Shadow’s case first came to light in a social media post by a rescue organization. The pup was taken to Cottonwood Animal Hospital and the organization sought a donation for her.

“Urgent donations needed! We just got in this sweet little puppy. At this time we do not know what happened to him but he needs medical attention ASAP,” said a Facebook post by Celestial Zoo.

Pictures of the Black Labrador retriever-German shepherd mix showed him to be severely disfigured around the snout.

A Murray Police officer responded to the case and said that Callen admitted to intentionally placing her elastic hair tie around the dog’s snout for 48 hours to keep her quiet.

“Alexis had sole custody of the companion animal,” the police statement said, according to Gephardt Daily.

“Alexis acted in a heinous and cruel manner by inflicting an extreme amount of physical pain to the 3-month-old companion animal (black Labrador mix type dog). Alexis denied the dog essential care by refusing to seek veterinarian care,” it said.

Celestial Zoo confirmed the arrest on its Facebook page. “Shadow had to go back to the vet today for a cone, but even though she is not happy about her cone, she is happy to report that thanks to the quick action of the Murray Animal Control officers, an arrest has been made on felony animal abuse charges. We are thrilled at the quick action and hope that justice is found,” said the post.

Fox35 reported that Shadow’s injuries are so severe that her surgery will cost $2,000 and the veterinarian says that it will take her two weeks to recover.

“Left side [of her nose], it’s completely open even with her mouth closed,” Caylla Facemyer, Shadow’s new foster owner, said to Fox 13. “You can see into her mouth. It’s pretty bad.”