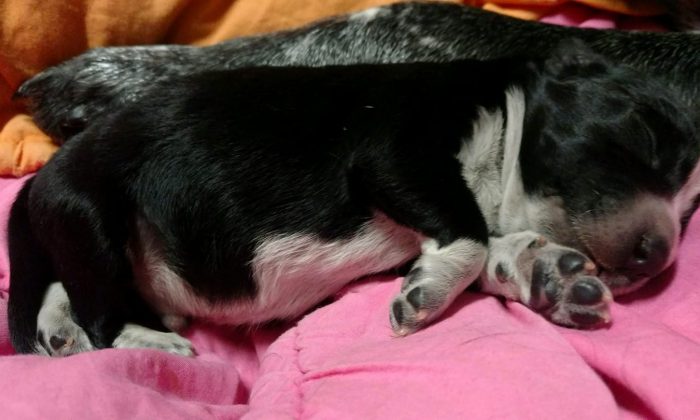 The only surviving puppy from a litter born in the snow on Dec. 26 in Knoxville, Ill. (Image via Knox County Humane Society)
US News

Eight puppies out of a litter of nine froze to death in the snow, in Illinois.

A black lab mix gave birth outside in the snow, in below freezing temperatures. The owner kept the dog outside and did not realize it was pregnant, according to WQAD.

“It is sad when you lose animals like that, to know that they probably would have been saved if they would have been inside or somewhere where it was warmer out, rather than just outside,” said Curt Kramer of the Knox County Humane Society, via WQAD.

The Humane Society took the frigid surviving pup and mother into a shelter to warm up. The mother dog barely survived.

Kramer doesn’t think much of the owner.

“I think it was just one of those unfortunate things where the dog just lived there and was just fed daily, and that was about it,” said Kramer.

The Knox County Humane Society reminded people of the law related to pets and cold weather, 510 ILCS 70/ Sec. 3.01, via its Facebook page:

(1) results in injury to or death of the animal; or
(2) results in hypothermia, hyperthermia, frostbite, or similar condition as diagnosed by a doctor of veterinary medicine.
(c-5) Nothing in this Section shall prohibit an animal from being impounded in an emergency situation under subsection (b) of Section 12 of this Act.

The Humane Society also posted on Facebook that the dogs were now in its care, but would not be put up for adoption until “her baby is much stronger and at legal age to be adopted.”