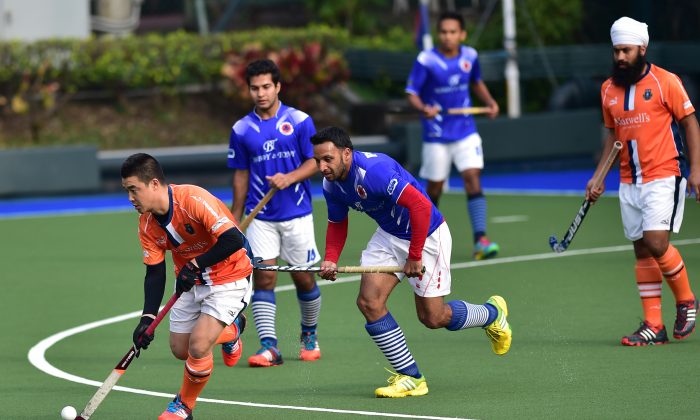 Khalsa-A’s Lu Peng did not have his usual success in setting up his forwards in this HKHA Premier division match against Punjab-A as many passes were intercepted by fast moving Pinjab player at King’s Park on Sunday Feb 1, 2015. (Bill Cox/Epoch Times)
HK Hockey

Punjab Turn on the Style Against Khalsa

HONG KONG—With 3-players in their side (Gagandeep Singh, Asad Bashir and Khurram Shazad) that will soon travel to Canada to play in the Canadian summer league, Punjab-A gave Khalsa-A, considered to be the current top team in Hong Kong, a real test in the HKHA Premier division on Sunday Feb 1, 2015.

Khalsa-A are not used to being the underdogs but the Punjab side was in top form – matching Khalsa with fast tackles, persistent defending and superb stick-work and ball control. Punjab made great pass interceptions to change the direction of play setting up fast attacking moves. Khlasa-A almost did not know what had hit them or how to cope with the superb play both in attack and defence. With the two ex-Olympians (Waseem Ahmad and Sukhwinder Singh) playing in conjunction with Gagandeep Singh, Asad Bashir up front, and Khurram Shahzad Muhammad Bilal in defence also bolstered the play of their other team mates.

Punjab forced a penalty corner after 10 minutes of play and Bilal forced the ball along the ground through several players including the goalie’s legs into the goal. The game continued to go Punjab’s way, superb interceptions set up attacking opportunities particularly for Gagandeep Singh and Waseem Ahmad. Punjab’s second opportunity arose after a further 10-minute period when the ball was fed across to Punjab’s No. 5, Samsul Haziq at the right hand side of the circle, he rounded the advancing goalie and scored from a very narrow angle – 2-0.

This was new territory for Khalsa: 2-goals down with no reply. Punjab attacked again Waseem Ahmad laid the ball off to Bashir to fire at goal from the left side: again it hit the target – the supporters erupted. The score remained at 3-0 to half time.

A super match, but there have been rumbles from the Khalsa supporters’ camp that maybe one or two visiting players in the Punjab-A side might not be able to meet the 5-match league playing requirement so Punjab may lose the points! As the table stands at the moment SSSC-A lead with 39-points, Punjab-A are second with 38 points and Khalsa-A are on 37 points setting up an interesting a final week in the league next week.