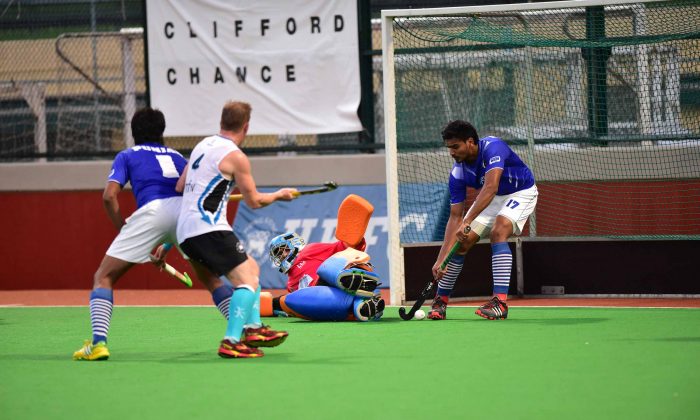 Punjab Defeat Football Club to Stay Top of the Standings

HONG KONG—All of the top-3 men’s teams won their matches last weekend to maintain their respective positions in the table. Punjab-A and Singh Sabha Sports Club (SSS-A) are both on 25 points, but Punjab are ahead on goal difference. Punjab and SSC have only dropped 2-points by drawing when they played each other in their match on Oct. 26. Khalsa-A lost their match with SSC-A on Oct 19 and are now 3rd in the standings on 24-points but they are only 1-point behind the leaders.

After a fast entertaining match between HKFC-A and Punjab-A last weekend (Sunday Nov. 23) which was won 3-2 by Punjab the 4th placed team HKFC are on 18-points with a game in hand. This was the second loss of the season for HKFC as they were also defeated by KNS-A (3-2) on Oct. 26.

The HKFC-A match with Punjab-A was fast, exciting and at a sustained pace with some great skills on display. HKFC-A were playing their structured hockey style at high speed and were delighted to get the first goal mid way through the first half, but it was not long before Punjab-A countered to level the score to go into the break at 1-1. Punjab-A added a second goal early in the second half from the rebound, after a hard hit shot from the right of the goal had been saved by HKFC keeper. Punjab-A’s 3rd goal came from a retaken penalty corner 10-minutes from the whistle and although HKFC made heavy attacks on the Punjab goal they could not force the equaliser.

The teams take a break this coming weekend except for catch-up games by Valley against Pak-A (Nov 28) and HKFC against HKCC (Dec. 4). The next full round of matches will be on Dec 7 when Punjab-A and SSSC-A both meet lower table opponents, but Khalsa-A play HKFC-A at King’s Park. Although Football Club have upped their game in the last few weeks, they often do not travel well to King’s Park and the clash with Khalsa is likely to be a season decider for them, and maybe for both clubs. If Khalsa win it will keep them in close touch with the leaders. A loss for HKFC will see them struggling at least 7-points off the lead, and that assumes that they can win their catch up game with HKCC on Dec. 4.

But the most important matches of the first half season will take place on the final weekend before the year-end break to be played on Dec. 14 when Punjab-A play Khalsa-A at King’s Park and HKFC-A play SSSC-A at Sports Road.