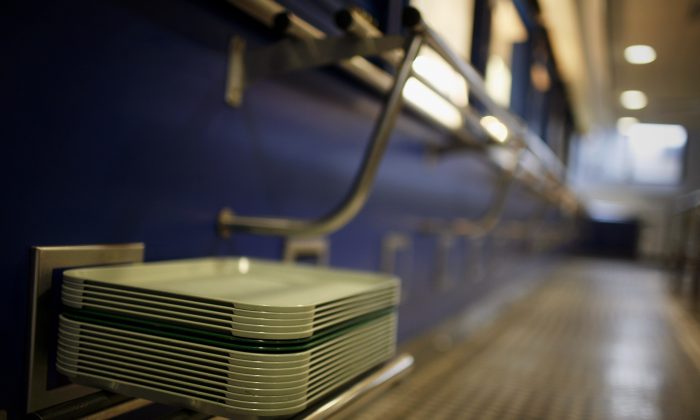 A pile of canteen trays is seen in the kitchen of a school on Dec. 14, 2005. (Bruno Vincent/Getty Images)
Viewpoints

The media headlines would make George Orwell spin in his grave:

You would never guess that the political battle is actually about the exact opposite: a Biden (i.e., Democratic, not Republican) administration rules change that would deny federal lunch subsidies to school districts that don’t allow biologically male students to use girls’ bathrooms and locker rooms and play on girls-only athletic teams.

The new proposed rules, issued in May (pdf) by the Biden Department of Agriculture, which administers the National School Lunch Program, redefine Title IX of the Civil Rights Act, enacted in 1972 to bar educational institutions from discriminating on the basis of sex, to include discrimination—if that’s what it can be called—on the basis of “gender identity.”

That doesn’t mean allowing girls who have decided they’re really boys to be bullied or mistreated by their teachers or fellow students—no one wants that. It means—and the Biden administration has made this clear—allowing a Lia Thomas onto every high school swim team, so that biological girls can almost never win in a competition, and allowing boys to wander freely into girls’ restrooms. If a school, school district, or state government decides that it would rather not go along with this, the federal government can cut off the free-lunch spigot. That would mean that all needy students in their districts would “starve”—not just those who identify as LGBT.

Not surprisingly, attorneys general in 22 Republican-dominated states filed a lawsuit on July 26 (pdf) seeking to block enforcement of the proposed rules, which would apply not only to school lunches but also to the federal food-stamp program and other forms of nutritional assistance. They argue that the change, making “gender identity” a specially protected category, has no basis in the federal laws that created the school lunch program and essentially involves an unauthorized rewriting of Title IX and related statutes. Most of those states have laws specifically barring biological males from participating in girls’ sports and using girls’ bathrooms and locker rooms.

In early August, Idaho Gov. Brad Little and 14 other state governors sent a letter to President Joe Biden protesting the wholesale denial of privacy and protection for female students.

“Your Administration would take lunch money away from our kids and grandkids in pursuit of a radical agenda that has no basis in science and is not supported by the vast majority of the American people,” the governors wrote.

As you can see, some in the media are already twisting the narrative a full 180 degrees, framing it as a story about cruel Republican lawmakers who want to deny food to transgender-identifying kids. It’s a version of the “Don’t Say Gay” tag that the media attached to the recent—and perfectly reasonable—Florida law banning classroom instruction about sexual orientation and gender identity from kindergarten through third grade. And it’s part of what can only be described as an unrelenting war against children by progressives and their media allies.

The Biden Education Department has its own version of the Agriculture Department’s proposed rules, seeking to expand Title IX to require schools from kindergarten through college and beyond to open up single-sex bathrooms, locker rooms, sports teams, and even dormitory accommodations to students claiming transgender status—at the risk of losing all federal funding, from school-supplies purchases for low-income children to university research grants.

On July 15, a federal judge in Tennessee paused enforcement of that so-called guidance (which included penalties for not using a student’s preferred pronouns) in a lawsuit brought by 20 states. A CNN report characterized the ruling, by Trump appointee Charles E. Atchley Jr., as “siding with Republican-led states fighting to enforce anti-trans policies on their books.” CNN, like the rest of the media, expressed no solicitude for girls who might not want to share a dorm room with a biological male or lose track competitions to stronger, faster male bodies.

The progressives’ war against children has taken many forms of late. During the COVID-19 hysteria that marked the 2021–2022 school year, some 75 percent of schools required students to wear masks for the entire day, including recess—even though people under age 18 are at a vanishingly small risk of dying of COVID, and there has been no evidence that schools play any major role in spreading the virus. That is, when they were allowed to attend school at all.

The remote learning pushed by teachers’ unions—children sitting all day at home in front of a screen—meant that they lost on average 50 percent of a year’s learning, studies show, with the damage greatest to low-income black and Latino kids. Then, there is the issue of “critical race theory”—a poisonous ideology about “systemic racism” and “white privilege” that has replaced the teaching of actual U.S. history in many classrooms.

Those are destructive policies that have genuinely hurt children. But they at least have the virtue of being local policies that local action can change—and in the case of mask mandates, they seem to be a thing of the past. The Biden administration’s proposed rules barring food and school supplies for kids living in states that don’t go along with the administration’s (and the media’s) faddish preoccupation with transgender identity are something more.

They are totalitarian and inescapable, and the children who stand to be harmed number in the millions.